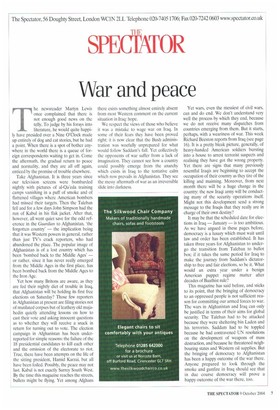 The newsreader Martyn Lewis once complained that there is not enough good news on the telly. To judge by his forays into literature, he would quite happily have presided over a Nine O'Clock made up entirely of dog and cat stories, but he had a point. When there is a spot of bother anywhere in the world there is a queue of foreign correspondents waiting to get in. Come the aftermath, the gradual return to peace and normality, and they are all off again, enticed by the promise of trouble elsewhere.

Take Afghanistan. It is three years since our television screens were bombarded nightly with pictures of al-Qa'eda training camps vanishing in a puff of smoke and of flattened villages where American bombers had missed their targets. Then the Taleban fell and for a few days John Simpson had the run of Kabul in his flak jacket. After that, however, all went quiet save for the odd reference in the Guardian to Afghanistan, 'the forgotten country' — the implication being that it was Western powers in general, rather than just TV's crack reporters, who had abandoned the place. The popular image of Afghanistan is of a lost country which has been 'bombed back to the Middle Ages' — or rather, since it has never really emerged from the Middle Ages in the first place, has been bombed back from the Middle Ages to the Iron Age.

Yet how many Britons are aware, as they are fed their nightly diet of trouble in Iraq, that Afghanistan will be holding its first free elections on Saturday? Those few reporters in Afghanistan at present are filing stories not of mutilated corpses but of leathery old mujahedin quietly attending lessons on how to cast their vote and asking innocent questions as to whether they will receive a snack in return for turning out to vote. The election campaign in Afghanistan has been underreported for simple reasons: the failure of the 18 presidential candidates to kill each other and the omission of the electorate to riot. True, there have been attempts on the life of the sitting president, Hamid Karzai, but all have been foiled. Possibly, the peace may not last. Kabul is not exactly Surrey South West. By the time this magazine reaches the streets, bullets might be flying. Yet among Afghans there exists something almost entirely absent from most Western comment on the current situation in Iraq: hope.

We respect the views of those who believe it was a mistake to wage war on Iraq. In some of their fears they have been proved right; it is now clear that the Bush administration was woefully unprepared for what would follow Saddam's fall. Yet collectively the opponents of war suffer from a lack of imagination. They cannot see how a country could possibly emerge from the anarchy which exists in Iraq to the tentative calm which now prevails in Afghanistan. They see the messy aftermath of war as an irreversible slide into darkness.

Yet wars, even the messiest of civil wars, can and do end. We don't understand very well the process by which they end, because we do not receive many dispatches from countries emerging from them. But it starts, perhaps, with a weariness of war. This week Richard Beeston reports from Iraq (see page 16). It is a pretty bleak picture, generally, of heavy-handed American soldiers bursting into a house to arrest terrorist suspects and realising they have got the wrong property. Yet there are signs that many previously resentful Iraqis are beginning to accept the occupation of their country as they tire of the killing and maiming. Moreover, from next month there will be a huge change in the country: the new Iraqi army will be conducting many of the security operations itself. Might not this development send a strong message to the Iraqis that they really are in charge of their own destiny?

It may be that the scheduled date for elections in Iraq — January — is too ambitious. As we have argued in these pages before, democracy is a luxury which must wait until law and order has been established. It has taken three years for Afghanistan to undergo the transition from Taleban to ballot box; if it takes the same period for Iraq to make the journey from Saddam's dictatorship to free and fair elections, so be it. What would an extra year under a benign American puppet regime matter after decades of Baathist rule?

This magazine has said before, and sticks to its point, that the bringing of democracy to an oppressed people is not sufficient reason for committing our armed forces to war. The wars in Afghanistan and Iraq can only be justified in terms of their aims for global security. The Taleban had to be attacked because they were sheltering bin Laden and his terrorists. Saddam had to be toppled because he had contravened UN resolutions on the development of weapons of mass destruction, and because he threatened neighbouring states and Western oil supplies. But the bringing of democracy to Afghanistan has been a happy outcome of the war there. Anyone prepared to look through the smoke and gunfire in Iraq should see that in due course democracy will prove a happy outcome of the war there, too.