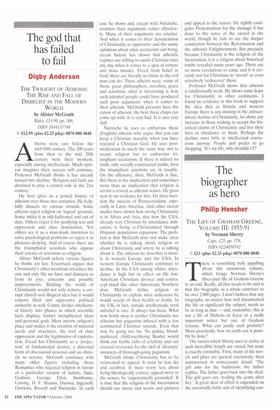 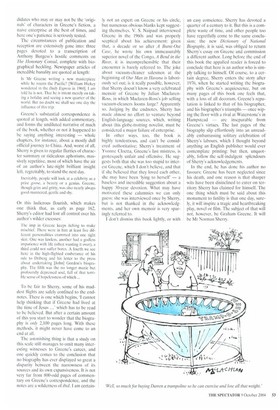 The biographer as hero

There is something truly appalling about this monstrous volume, which brings Norman Sherry's three-part life of Graham Greene to an end. Really, all that needs to be said is that the biography as a whole contrives to be over 2,000 pages. I don't believe that any biography, no matter how well documented the life or significant the subject, needs to be as long as that — and, remember, this is not a life of Dickens or Joyce or a really important writer but one of Graham Greene. What can justify such prolixity? More practically, how on earth can it possibly be done?

The tactics which Sherry uses to arrive at such incredible length are varied, but none is exactly estimable. First, many of the novels and plays are quoted extensively, then summarised in unnecessary detail: 'The girl asks for the bathroom; the father replies. The father goes back into the shed. The girl goes out, trailing the jeans after her.' A great deal of effort is expended on the essentially futile aim of identifying can didates who may or may not be the 'originals' of characters in Greene's fiction, a naive enterprise at the best of times, and here one's patience is seriously tested.

The circumstances of publication and reception are extensively gone into: three pages devoted to a transcription of Anthony Burgess's hostile comments on The Honorary Consul, complete with biographical heckling. Newspaper articles of incredible banality are quoted at length:

Is Mr Greene writing a new masterpiece while he roams the Pacific? [William Hickey wondered in the Daily Express in 19601. F am told he is not. That he is intent merely on taking a holiday and seeing a new quarter of the world. But no doubt we shall see one day the influence of this trip.

Greene's substantial correspondence is quoted at length, with added commentary, and forms the undiluted narrative of much of the book, whether or not it happened to be saying anything interesting — whole chapters, for instance, about a mostly dull official journey to China. And, worst of all, Sherry is given to regular flurries of character summary or ridiculous aphorisms, massively repetitive, most of which have the air of an author's late-night brilliant insight left, regrettably, to stand the next day.

Inevitably, people will look at a celebrity as a prize goose, a beauty or a genius. Greene, though grim and gritty, was also nearly always good-mannered, gentle and shy.

Or this ludicrous flourish, which makes one think that, as early as page 162, Sherry's editor had lost all control over his author's wilder excesses:

The imp in Greene keeps itching to make mischief. There were in him at least five different personalities crammed into one tight skin. One was lawless, another had a godless impatience with life (often wanting it over), a third could not suffer bores. A fourth we see here in the high-flighted exuberance of his ode to Driberg and his letter to the press about undertaking [John] Gordon's biography. The fifth was the no longer manic but profoundly depressed soul, full of that terrible sense of hopelessness of which ...

To he fair to Sherry, some of his maddest flights are safely confined to the endnotes. There is one which begins, 'I cannot help thinking that if Greene had lived at the time of Jesus ...' which has to be read to be believed. But after a certain amount of this you start to wonder that the biography is only 2,100 pages long. With these methods, it might never have come to an end at all.

The astonishing thing is that a study on this scale still manages to omit many interesting witnesses to Greene's career, and one quickly comes to the conclusion that no biography has ever displayed so great a disparity between the narrowness of its sources and its own expansiveness. It is not vet)/ far from 800-odd pages of commentary on Greene's correspondence, and the notes are a wilderness of ibid. I am certain

ly not an expert on Greene or his circle, but numerous obvious blanks kept suggesting themselves. V. S. Naipaul interviewed Greene in the 1960s and was properly sceptical about his achievement; given that, a decade or so after A Burni-Out Case, he wrote his own immeasurably superior novel of the Congo, A Bend in the River, it is incomprehensible that their encounter is barely referred to. The joke about vacuum-cleaner salesmen at the beginning of Our Man in Havana is laboriously set out; is it really possible, however, that Sherry doesn't know a very celebrated memoir of Greene by Julian MaclarenRoss, in which Maclaren-Ross's job selling vacuum-cleaners looms large? Apparently so. Judging by the endnotes. Sherry has made almost no effort to venture beyond English-language sources, which, writing about this globe-trotting novelist, must be considered a major failure of enterprise.

In other ways, too, the book is highly tendentious, and can't be considered authoritative; Sherry's treatment of Yvonne Cloetta, Greene's last mistress, is grotesquely unfair and offensive. He suggests both that she was too stupid to interest Greene, which I don't believe, and that if she believed that they loved each other, she may have been 'lying to herself — a baseless and incredible suggestion about a happy 30-year devotion. What may have motivated these calumnies we can only guess; she was interviewed once by Sherry, but is not thanked in the acknowledgments, and her own memoir is very sparingly referred to.

I don't dismiss this book lightly, or with an easy conscience. Sherry has devoted a quarter of a century to it. But this is a complete waste of time, and other people too have regretfully come to the same conclusion; the new Dictionary of National Biography, it is said, was obliged to return Sherry's essay on Greene and commission a different author. Long before the end of this book the appalled reader is forced to conclude that here is an author who is simply talking to himself. Of course, to a certain degree, Sherry enters the story after 1976, when he started writing the biography with Greene's acquiescence, but on many pages of this book one feels that, with a loss of all decorum, Greene's reputation is linked to that of his biographer, and his biographer's triumphs — once wiping the floor with a rival at Waterstone's in Hampstead — are inseparable from Greene's virtues. The last pages of the biography slip effortlessly into an unreadably embarrassing solitary celebration of Sherry's labours, which I thought beyond anything an English publisher would ever contemplate printing: but then, unquotably, follow the self-indulgent splendours of Sherry's acknowledgements.

In the end, he has done his author no favours; Greene has been neglected since his death, and one reason is that sharper wits have been disinclined to enter on territory Sherry has claimed for himself. The one thing which must be said about this monument to futility is that one day, surely, it will inspire a tragic and heartbreaking play, novel or film. The subject of that will not, however, be Graham Greene. It will be Mr Norman Sherry.