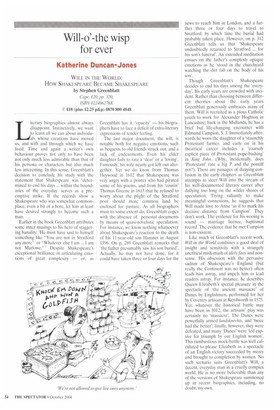 WILL IN THE WORLD: How SHAKESPEARE BECAME SHAKESPEARE by Stephen Greenblatt Cape, £20, pp. 320, ISBN 022406276X 477., 18 (plus 12.25 p&p) 0870 800 4848 Literary biographies almost always disappoint. Instinctively, we want to learn all we can about individuals whose creations have moved us, and with and through which we have lived. Time and again a writer's own behaviour proves not only to have been not only much less admirable than that of his persona or characters but also much less interesting. In this sense, Greenblatt's decision to conclude his study with the statement that Shakespeare was 'determined to end his days ... within the boundaries of the everyday' serves as a preemptive strike. If the records show a Shakespeare who was somewhat commonplace, even a bit of a bore, let him at least have desired strongly to become such a man.

Earlier in the book Greenblatt attributes some inner musings to his hero of staggering banality: 'He must have said to himself something like "You are not in Stratford any more" or "Whatever else I am ... I am not Marlowe." ' Despite Shakespeare's exceptional brilliance in articulating emotions of great complexity — or, as Greenblatt has it, 'opacity' — his biographers have to face a deficit of extra-literary expressions of tender feeling.

The last major document, the will, is notable both for negative emotions, such as bequests to old friends struck out, and a lack of endearments. Even his elder daughter fails to rate a 'dear' or a 'loving'. Famously, his wife nearly got left out altogether. Yet we do know from Thomas Heywood in 1612 that Shakespeare was very angry with a printer who had pirated some of his poems, and from his 'cousin' Thomas Greene in 1613 that he refused to worry about the plight of the Stratford poor should more common land be enclosed for pasture. As all biographers must to some extent do, Greenblatt copes with the absence of personal documents by means of quasi-novelistic speculation. For instance, we know nothing whatsoever about Shakespeare's reaction to the death of his 11-year-old son Ham net in August 1596. On p. 289 Greenblatt remarks that 'the father presumably saw his son buried'. Actually, he may not have done, for it could have taken three or four days for the

news to reach him in London, and a further three or four days to travel to Stratford, by which time the burial had probably taken place. However, on p. 312 Greenblatt tells us that 'Shakespeare

undoubtedly returned to Stratford for his son's funeral'. An extended meditation ensues on the father's complexly opaque emotions as he 'stood in the churchyard watching the dirt fall on the body of his son'.

Though Greenblatt's Shakespeare decides to end his days among the 'everyday', his early years are crowded with incident. Rather than choosing between different theories about the early years Greenblatt generously embraces many of them. Will is recruited as a pious Catholic youth to work for Alexander Hoghton in Lancashire; back in the Midlands, he has a brief but life-changing encounter with Edmund Campion, S. J. Immediately afterwards he woos the daughter of a 'staunchly Protestant farmer, and early on in his theatrical career includes a 'coarsely explicit piece of Protestant pope-bashing' in King John, (Why, incidentally, does 'Protestant' rate a big P and the pontiff not?). There are passages of dizzying confusion in the early chapters as Greenblatt attempts to steer Will into the stream of his well-documented literary career after dallying too long on the wilder shores of speculation. Trying valiantly to make meaningful connexions, he suggests that Will made love to Anne 'as if to mark his decisive distance from Campion'. They don't work. The evidence for his wooing is sound — marriage licence, baptismal record. The evidence that he met Campion is non-existent.

Like much of Greenblatt's recent work, Will in the World combines a good deal of insight and sensitivity with a strangely uncritical mish-mash of idees fixes and nonsense. His obsession with the pervasive sadism of Shakespeare's England (but really the Continent was no better) often leads him astray, and impels him to lead readers astray. For instance, he describes Queen Elizabeth's special pleasure in the spectacle of 'the ancient massacre' of Danes by Englishmen, performed for her by Coventry artisans at Kenilworth in 1575. Yet, whatever the historical battle may have been in 1012, the artisans' play was certainly no 'massacre'. The Danes were powerfully armed landsknechts, and 'twice had the better'; finally, however, they were defeated, and many 'Danes' were 'led captive for triumph by our English women'. This rumbustious mock-battle was well calculated to please Elizabeth as a spectacle of an English victory succeeded by mercy and brought to completion by women. No such scenario suits Greenblatt's Will, a decent, everyday man in a cruelly complex world. He is no more believable than any of the versions of Shakespeare summoned up in recent biographies, including, no doubt, my own.