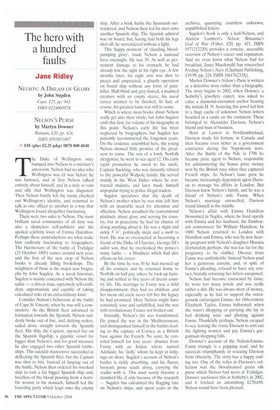 The hero with a hundred faults

NELSON: A DREAM OF GLORY by John Sugden Cape, £25, pp, 943, ISBN 022406097X NELSON'S PURSE by Martyn Downer Bantam, £20, pp. 424, ISBN 0593051807 ct£18 (plus 12.25 p&p) 0870 800 4848 The Duke of Wellington once bumped into Nelson in a minister's anteroom. Nelson had no idea who Wellington was (it was before he was famous), and at first Nelson talked entirely about himself, and in a style so vain and silly that Wellington was disgusted. Then Nelson briefly left the room, checked Out Wellington's identity, and returned to talk as one officer to another in a way that Wellington found altogether fascinating.

There were two sides to Nelson. The most brilliant naval commander of all time was also a shameless self-publicist and the spoiled celebrity lover of Emma Hamilton. Perhaps these contradictions are what make him endlessly fascinating to biographers. The bicentenary of the battle of Trafalgar (21 October 1805) comes around next year, and the first of the new crop of Nelson books is already filling bookshops. The weightiest of these is the major new biography by John Sugden. As a naval historian, Sugden is mainly concerned with Nelson the sailor — a driven man, supremely self-confident, opportunistic and capable of taking calculated risks of an extraordinary kind.

Consider Nelson's behaviour at the battle of Cape St Vincent, when he was still a commodore. As the British fleet advanced in formation towards the Spanish, Nelson suddenly broke out of line, and, defying orders, sailed alone straight towards the Spanish fleet. His ship, the Captain, opened fire on the Spanish flagship, a gigantic vessel far bigger than Nelson's, and for good measure he also engaged two other Spanish battleships. This suicidal manoeuvre succeeded in deflecting the Spanish fleet, but the Captain was shot to bits. Instead of limping out of the battle, Nelson then ordered his wrecked ship to ram a far bigger Spanish ship and, heedless of the blood pouring from a horrible wound in his stomach, himself led the boarding party which leapt onto the enemy ship. After a brisk battle the Spaniards surrendered, and Nelson then led his men onto another Spanish ship. The Spanish admiral was on board, but, having had both his legs shot off, he surrendered without a fight.

This 'happy moment' of 'dazzling, bloodpumping glory', made Nelson a national hero overnight. He was 39. As well as permanent damage to his stomach, he had already lost the sight in his right eye. A few months later, his right arm was shot to pieces and amputated, a ghastly operation on board ship without any form of painkiller. Half-blind and grey-haired, a maimed creature with an empty sleeve, his naval career seemed to be finished. In fact, of course, his greatest fame was still to come.

Which is where most books about Nelson really get into their stride, but John Sugden ends this first, fat volume of his biography at this point. Nelson's early life has been neglected by biographers, but Sugden has patiently reconstructed the forgotten years. On the evidence assembled here, the young Nelson showed little promise of the greatness to come. The son of a lowly Norfolk clergyman, he went to sea aged 12. His early rapid promotion he owed to his uncle, Captain Suckling, who was distantly related to the powerful Walpole family. He served mainly in the West Indies where he contracted malaria, and later made himself unpopular trying to police illegal traders.

Sugden speculates that the death of Nelson's mother when he was nine left him with an insatiable need for attention and affection. Nelson mouthed the conventional platitude about glory and serving his country, but in peacetime he had fat chance of doing anything about it. He was a slight and sickly 5' 6", politically inept and a snob to boot. He was so overexcited at becoming a friend of the Duke of Clarence, George Ill's sailor son, that he overlooked the prince's many faults — a blindness which had dire effects on his career.

By the time he was 30 he had messed up all his contacts and he returned home to Norfolk on half pay, where he took up farming and settled to five years of dreary country life. His marriage to Fanny was a mild disappointment; they had no children, and her mean old uncle never left her the legacy he had promised. Here Nelson might have remained, sour and unfulfilled, had the war with revolutionary France not broken out.

Instantly, Nelson's life was transformed. He joined the war in the Mediterranean, and distinguished himself in the battles leading to the capture of Corsica as a British base against the French. No saint, he consoled himself for four years' absence from Fanny with an Italian whore named Adelaide, his 'dolly' whom he kept in lodgings on shore. Sugden's account of Nelson's battles is richly absorbing, and his fluent, buoyant prose scuds along, carrying the reader with it. This must surely become a standard life, if only because of the research — Sugden has calculated the flogging rate on Nelson's ships, and spent years in the archives, quarrying countless unknown, unpublished letters.

Martyn Downer's Nelson's Purse is written as a detective story rather than a biography. The story begins in 2002, when Downer, a Sotheby's jewellery expert, was asked to value a diamond-encrusted anchor bearing the initials H. N. Sourcing this jewel led him to a huge cache of unknown Nelson letters hoarded in a castle on the continent. These belonged to Alexander Davison, Nelson's friend and man of business.

Born at Lanton in Northumberland, Davison made his fortune in Canada and then became even richer as a government contractor during the Napoleonic wars. After the Battle of the Nile in 1798 he became prize agent to Nelson, responsible for administering the bonus prize money won by the British navy when they captured French ships. As Nelson's fame grew he became increasingly dependent upon Davison to manage his affairs in London. But Davison knew Nelson's family, and he was a friend of Nelson's wife Fanny. When Nelson's marriage unravelled, Davison found himself in the middle.

Nelson's affair with Emma Hamilton blossomed in Naples, where he lived openly with Emma and her husband, the flamboyant connoisseur Sir William Hamilton. In 1800 Nelson returned to London with Hamilton and Emma, who was by now heavily pregnant with Nelson's daughter Horatia (fortunately perhaps, she was too fat for the pregnancy to be visible). Divorce from Fanny was unthinkable. Instead Nelson paid her a generous annuity, and, in spite of Fanny's pleading, refused to have any contact, brutally returning her letters unopened.

Nelson had become coarsened by fame; he wore too many jewels and was really rather a shit. He was always short of money, especially as he had to support the outrageously extravagant Emma. An 18th-century Elizabeth Taylor, Emma ballooned; when she wasn't shopping or partying she lay in bed drinking wine and plotting against Fanny. Thankfully perhaps, Nelson escaped to sea, leaving the trusty Davison to sort out the fighting women and pay Emma's gargantuan shopping bills.

Downer's account of the Nelson-EmmaFanny triangle is a gripping read, and he succeeds triumphantly in rescuing Davison from obscurity. The story has a happy ending too. One of the relics in Davison's collection was the bloodstained green silk purse which Nelson had worn at Trafalgar. Downer auctioned this at Sotheby's in 2002, and it fetched an astonishing £270,650. Nelson would have been pleased.