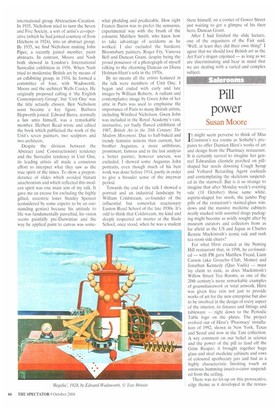 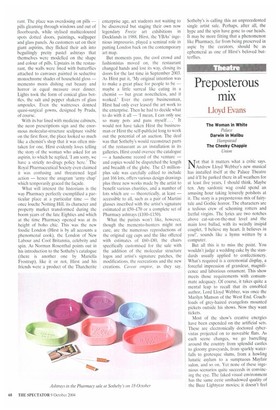 It might seem perverse to think of Miss Cranston's tea rooms as Sotheby's prepares to offer Damien Hirst's works of art and design from the Pharmacy restaurant. It is certainly surreal to imagine her genteel Edwardian clientele perched on pillshaped bar stools downing Cough Syrup and Voltam' Retarding Agent cocktails and contemplating the skeletons suspended in the stairwell. But is it so strange to imagine that after Monday week's evening sale (18 October) those same white, aspirin-shaped bar stools, the jumbo Pop pills of the restaurant's stained-glass windows and the massive medicine cabinets neatly stacked with assorted drugs packaging might become as avidly sought after by museum curators and collectors from as far afield as the US and Japan as Charles Rennie Mackintosh's iconic oak and rush tea room side chairs?

For what Hirst created at the Notting Hill restaurant that, in 1998, he co-founded — with PR guru Matthew Freud, Liam Carson (aka Grouch° Club, Momo) and Jonathan Kennedy (Quo Vadis) — must lay claim to rank, as does Mackintosh's Willow Street Tea Rooms, as one of the 20th century's more remarkable examples of gesamtkunstwerk or total artwork. Hirst was given free rein not just to provide works of art for the new enterprise but also to be involved in the design of every aspect of the interior, its fixtures and fittings and tableware — right down to the Periodic Table logo on the plates. The project evolved out of Hirst's 'Pharmacy' installation of 1992, shown in New York, Texas and Seoul and now in the Tate collection. A wry comment on our belief in science and the power of the pill to fend off the Grim Reaper, it brought together huge glass and steel medicine cabinets and rows of coloured apothecary jars and had as a highly characteristic finishing touch an ominous humming insect-o-cutor suspended from the ceiling.

There was no let-up on this provocative, edgy theme as it developed in the restau rant. The place was overdosing on pills — pills gleaming through windows and out of floorboards, while stylised multicoloured spots dotted doors, paintings, wallpaper and glass panels. As customers sat on their giant aspirins, they flicked their ash into beguilingly pretty pastel ashtrays that themselves were modelled on the shape and colour of pills. Upstairs in the restaurant, the walls were lined with butterflies attached to canvases painted in seductive monochrome shades of household gloss — memento mans dishing out beauty and horror in equal measure over dinner. Lights took the form of conical glass bottles, the salt and pepper shakers of glass ampoules. Even the waitresses donned quasi-surgical gowns, designed by Prada, of course.

With its bar lined with medicine cabinets, the neon prescriptions sign and the enormous molecular-structure sculpture visible on the first floor, the place looked so much like a chemist's shop that it was often mistaken for one. Hirst evidently loves telling the story of the woman who asked for an aspirin, to which he replied, 'I am sorry, we have a strictly no-drugs policy here.' The Royal Pharmaceutical Society even claimed it was confusing and threatened legal action — hence the anagram 'army chap' which temporarily graced the façade.

What will interest the historians is the way Pharmacy perfectly exemplified a particular place at a particular time — the once louche Notting Hill, its character and property market transformed during the boom years of the late Eighties and which at the time Pharmacy opened was at its height of boho chic. This was the new foodie London (Hirst is by all accounts a phenomenal cook), the London of New Labour and Cool Britannia, celebrity and spin. As Norman Rosenthal points out in his introduction to the Sotheby's catalogue (there is another one by MarieIla Frostrup), like it or not, Hirst and his friends were a product of the Thatcherite enterprise age, art students not waiting to be discovered but staging their own now legendary Freeze art exhibitions in Docklands in 1988. Hirst, the YBAs' ingenious impresario, played a seminal role in putting London back on the contemporary art map.

But moments pass, the cool crowd and fashionistas moved on, the restaurant changed hands and lost its way, closing its doors for the last time in September 2003. As Hirst put it, 'My original intention was to make a great place for people to be — maybe a little surreal like eating in a chemist — but great nonetheless, and it worked.' Ever the canny businessman, Hirst had only ever leased the art work to the enterprise. Then he had to decide what to do with it all — 'I mean, 1 can only use so many pots and pans myself ... ' It would not have taken Hirst the businessman or Hirst the self-publicist long to work out the potential of an auction. The deal was that Sotheby's would reconstruct parts of the restaurant as an installation in its galleries, Hirst could oversee the catalogue — a handsome record of the venture — and copies would be dispatched the length

and breadth of the globe. The millionplus sale was carefully edited to include just 166 lots, offers various design drawings plus three new works made by the artist to benefit various charities, and a number of lots which are — theoretically, at least — accessible to all, such as a pair of Martini glasses inscribed with the artist's signature estimated at /50-170 or a complete set of Pharmacy ashtrays (£100-L150).

What the purists won't like, however, though the memento-hunters might not care, are the numerous reproductions of the original egg cups and the like offered with estimates of f60-180, the chairs specifically customised for the sale with the addition of the molecular structure logos and artist's signature patches, the modifications, the recreations and the new creations. Caveat emptor, as they say. Sotheby's is calling this an unprecedented single artist sale. Perhaps, after all, the hype and the spin have gone to our heads. It may be more fitting that a phenomenon like Pharmacy, far from being preserved in aspic by the curators, should be as ephemeral as one of Hirst's beloved butterflies.