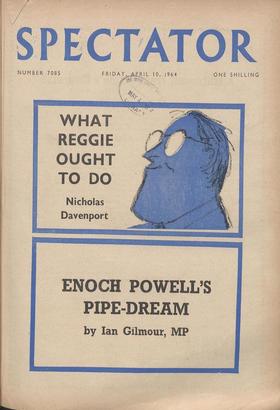 Two Cheers for the Second Channel

J UDGED by the standards of the entertain- ment industry the BBC's second tele- vision channel has every prospect of success. But the BBC has made more important claims. 'The...

—Portrait of the Week— SIR ALEC DOUGLAS-HOME set in motion

the 'Cus- tomary processes of consultation' to divine the best date for polling day. Those not consulted included The Times' latest political correspon- dent, `A Conservative,'...

MHE Government must have thought its I troubles with resale price maintenance were nearly over. It is hard that after struggling to abolish it on land, they should now find...

T HE British proposal to the UN that there should be a neutralised buffer zone between the South-West Arabian Federation and the Yemen has impressed no one. This is perhaps un-...

WILLIAM DEAN writes: Mr. Khrushchev's decision at last to publish the speech made by Mr. Suslov to the Central Committee of the Soviet Communist Party on February 14 and the...

Congo: The First Nation of Africa?

By KEITH KYLE rro the surprise of all, Congo has met a dead- ' line. Within the hundred days given to it for the purpose, the Presidential Commission sitting in secret session...

Waiting for the verdict on Oswald

From MURRAY KEMPTON WASHINGTON W t. arc likely to wait into June before we have a report from Chief Justice Earl Warren and the seven other representative Ameri- cans whom...

The Ba'ath at the Crossroads

Settled Out of Court ?

From OUR UN CORRESPONDENT • NEW YORK T HE chances of a solution to the crucial problem of Russia's potential loss of vote in the General Assembly because of her non- payment...

Towards a Concert of Powers?

From BERTRAND DE JOUVENEL Im dividin g line between Russian and Western forces at the end of the war in Europe soon hardened into a political frontier. Communist regimes were...

A Conservative For no very obscure reason, this week I

have been reminded of the Book of Enoch, which readers will doubtless' recall ranks among the most important of all the apocryphal Biblical writings. 1 turned to the very...

It is always pleasant to let a minority opinion be heard, on this question of literary provenance or any other. So I reproduce a piece of elucida- tion offered to me by 'a...

Alfred Duggan In a week obsessed with the present and

the immediate future, the death of Alfred Duggan made little mark. He wrote of the distant past. The art of the historical novelist is difficult and uncommon. Duggan wrote...

Uncomfortable Seats I noticed that Mr. Wilson, in his most

measured manner, taunted the Government for not holding by-elections in any of the seats now vacant. There seemed to be a further strong argu- ment here in favour (from the...

HAD I been asked this week (I wasn't) I would have been for an elec- tion in June. Not every- one agrees, all too evi- dently. But: 'What is so rare as a day in June? Then, if...

Hall on Sunday was a fervent occasion. Lord Attlee was sitting on the platform, silent and enigmatic, to give substance to Mr. Wilson's invocation of the spirit of 1945. (Mr....

Change at the Tate The news of Sir John Rothenstein's

forthcom- ing retirement from the Tate Gallery is sad: but it is hard not to feel that the achievements of who- ever succeeds him will appear even greater. Sir John goes at a...

George Brown turned to quotation to taunt the Tories this week— 'Those behind cried Forward ! And those before cried Back!' But he seemed to think it had some- thing to do with...

By IAN GILMOUR,•11IP `W ELL' said Baldwin, 'I am opposed to Socialism, but I have always endeavoured to make the Conservative Party face left in its anti-Socialism.' Enoch...

Your Own Reference Library

Many readers are likely to be interested in an 'Easibinder' which has been designed to hold twenty-six copies of the Spectator. Copies may be added week by week, even- tually...

What Reggie Ought to Do

By NICHOLAS DAVENPORT D EAR REGGIE.— it must be an awful bore for the guardian of our economy to have to present to Parliament a meaningless cash budget at an extremely awkward...

Making a Feast of Stephen

By HENRY FAIRLIE IF our self-nominated progressives wish to fi nd a place for Mr. Stephen Ward in their hagiology, that is their business. I am _interested only that we and they...

Memoirs of Uncle Wally By PHILIP HOPE-WALLACE London life wasn't expensive. Holing up eventually in Pimlico, one lived on £2 18s. a week, with bagwash at ninepence, a pair of...

political romances, I am moved to protest by his latest. He deplores that the 'needs of scholarship' at Oxford may be threatened by 'political pressures' and 'sonic faddish...

DEALING WITH OXBRIDGE SIR,-1 have a surprising secret to tell

your readers. It is this: provincial universities are good, but Oxford is in some ways, and for some purposes, rather better. Like all Oxford undergraduates, I was, a few years...

THE ROAD TO CLACTON PIER is not only at Southend

that the unauthorised removal of lifebuoys creates a problem. At Cam- bridge it has been solved economically by the River Conservators who have themselves removed the life-...

Without it TV cameras would be deprived o/ a I nagnificent vantage-point for views of Ludgate Hill. and Fleet Street.—Sir William Holford. And who shall balance gain with loss...

SIR, —As a private individual I could hardly comply with Patrick Duncan's request to dissuade the South African Government, whose assessment of the situation under its control...

SIR,—Mr. Laslett sees a vested interest behind every hedge, but

he pays me an undeserved compliment in assuming I am a college teacher merely because I think the Oxford teaching system worth defending. I am, as it happens, one of those...

seems determined to prove beyond doubt - -a point of which we are often accused, justly, it would seem- that Americans con- sider only the pompous important. What a terribly...

S ot. -- I find myself much in sympathy with Malcolm R utherford ('Talking

to My Tutor,' March 27). The one thing I really remember •about tutorials was the lire ritual. It always seemed to me that as soon as I started to read my weekly essay...

SOUTH BANK RELIGION SIR,--1 am sorry to hear that the

'meagre and puerile' teaching of those who look to history to validate the Faith does more harm than Dr. Barnes and the Bishop of Woolwich ever did or does. If this is so we...

SIR. --David Watt writes : 'Pundits . . . are inclined to think that Liberals will continue to gain two Conservatives to every one Labour voter.' I do not know which pundits he...

THE MILLIONS WHO STAY AWAY

am sure -that the clergy 'readers of the Spectator arc all- grateful to Mr. Reckitt for his letter in reply to - The Millions Who Stay Away.' Easter is rather a heavy time for...

Sia,- - -Mr. John Swaney's condemnation of Union debates in • this country reveals a distinct lack of self-knowledge. No mention was made of his visit to this Society last term...

shall always he eternally grateful that I had

the o pportunity to be an undergraduate at Oxford. I t would be nice to think that my heirs, if am. can have that same, chance. Yet your leading article, written presumably...

The Anatolian Smile. (Warner, from next Monday; 'A' certifi- cate.)—The Chalk Gar- den. (Leicester Square Theatre; 'U' certificate.) THE Anatolian smile is something I'd hate...

SIR,—Leslie Adrian's tragi-comic report about a householder's travail in seeking guidance about a new water heating system is repeated each day in every part of the country. As...

SIR,—On page 345 of the Spectator an advertisement appeared in which Notley Advertising Ltd. publicised their services. In the course of this they referred to the Advertising...

SIR.--Mr. Brien's 'Afterthought' (March 27) is a depressing piece of writing. I realise that this is journalism and not academic criticism, an attempt to persuade rather than to...

FOR sheer fertility of in- vention, and inconstancy, Picasso's nearest rival must be Francis Picabia, who died in his native Paris in 1953. 'Picabia's career is a kaleidoscopic...

By CLIVE BARNES EVERYBODY wants to get into the act. The General Post Office, the Royal Ballet, any day now I am expecting to find sales of Shakespeare beards oust- ing Beatle...

By DAVID PRYCE-JONES Clavigo is indeed a test. An early play of Goethe's, it would be easy to spoil, either by exaggerating its literary Romanticism, or by stultifying it into...

When Miss Sutherland sang Elvira at Glynde- bourne four years ago, I said to myself, and probably to others at the usual post-mortem in thelong-bar: 'A pretty enough score. A...

William Golding By DAVID LODGE T HE novels of Mr. William Golding are widely admired, and it may seem late in the day to attempt -a defence of them. Yet current criticism is...

THE first of these two books on recent German history offers itself specifically as a textbook for schools, and it is a pity if, for lack of any men- tion of Mr. Grunberger's...

ON Easter Sunday, 1916, a few score of patriotic Irishmen occupied the GPO and a number of other prominent buildings in the City of Dublin, and proclaimed a free and independent...

Prelude to Israel : The Memoirs of M. I. Bodenheimer. Edited by Henriette Hannah Bodenheimer. (1'. Yoseloff, 50s.) Next Generation : Travels in Israel. By David This is a...

A View of My Own. By Elizabeth Hardwick. (Heinemann, 30s.) - CONSIDERING how much American work does not get published in this country—poetry, notoriously—we are very well...

The Hand of Mary Constable. By Paul Gallico. (Heinemann, 21s.) The Face of a Madonna. By Thomas Armstrong. (Collins. 21s.) SENTIMENTAL Week. Defining 'sentimental' on the spur...

Like another woman's, my bone-white feet Come out of the sheets, the heavy shin And the powerful oval of the knee Much coarser than when I was a girl Newly turned twelve,...

'MAGNANIMITY in politics,' wrote Arthur Salter, is a jewel beyond price, of many facets.' Anyone reading the second instalment of Lord Longford's autobiography will see the...

THERE are plenty of people who don't like strangers asking questions in their city's red-light district. So Stephen Kolchak discovers when he starts a search for his missing...

By LOTHBURY W ITH the full report and accounts Imperial Chemical Industries produced a most in- formative ten-year table. This discloses that over that period sales have risen...

By CUSTOS I T will be a miracle if the equity share markets are able to hold their own in the face of the Greater London elections this week and the Budget next week. There...

Journey into Trouble By LESLIE ADRIAN You see, you should have struck out those booking conditions in minuscule italic on the back of the enrolment form, especially the bit...

By ALAN BRIE N It does not seem to be widely realised that some respected scholars claim' there' exists contem- porary evidence for a portrait of Jesus. Though Stephen Dedalus...

By PENELOPE MORTIMER To start with negatives: don't expect them to be impressed by abroad. Pompeii will leave them cold, except for the Study of the Two Naughty Bachelors,...