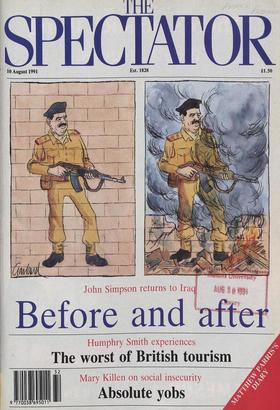 `I think we've been rumbled.' A Home Office official and the gov- ernor of Brixton prison were moved from their jobs because of the successful escape of two IRA prisoners...

THE SPECTATOR is currently changing the management of its subscription busi- ness. We will try to keep the disruption to an absolute minimum and would ask our subscribers to...

The Tories throw stones in a glass house of no principles NOEL MALCOLM D o you remember `Summer Heat on Labour'? Nor do most people. It was one of Mr Kenneth Baker's...

MATTHEW PARRIS I am off to Turkey, to escape from news- papers and television shows anxious for my views about 'outing'. As I prepared to leave, the telephone rang with the 34th...

Charles Moore is on holiday

SURVIVING IN THE RUINS

John Simpson reports from a Kurdish city in northern Iraq destroyed by Saddam Hussein, and reflects on the allies' failure to police the peace ON THE edge of the Khrdish town...

IN THE TRENCHES OF CROATIA

Matt Frei watches the ancient hatreds between Serbia and Croatia boil over into carnage Kamarevo I TOOK a taxi to the front line. The driver was nervous, fearing for his brand...

Anne McElvoy reports on the German squabbling over some much-travelled royal bones I have lived as a philosopher and want to be buried as such, without pomp and show and...

A reader received this letter: Dear Sir, We refer to your correspondence of the 27 June 1991. Firstly, the writer should like to apologise for the delay in responding to your...

Barry Riley reveals one of the most important lessons of the BCCI affair SPARE a thought for Price Waterhouse. It has just lost an important audit client, the Bank of Credit...

Mr. Francis Buxton writes an excellent letter in Wednesday's Times to protest against the smouldering agitation in regard to the immigration of aliens, which lately took active...

Humphry Smith samples the worst that Britain has to offer tourists I HAD resolved to seek out the very worst that the English tourist industry has to offer; the most degraded...

Christopher Howse unearths the life of an extraordinary impostor and eccentric GEORGE PSALMANAZAR was one of the most remarkable of all impostors, and his true story can never...

persist.. . EARLY one Sunday morning some years ago, I stood waiting at a bus stop on a nearly deserted Manhattan street. The only other person at the bus stop was a...

OUT, DAMNED SPOT, OUT!

The press: Paul Johnson on a hoax which didn't quite come off JOURNALISTS who paid 20p each to attend a press conference called by Frocs (Faggots Rooting Out Closeted...

GABRIEL MOSS, QC, is out of luck. When he asks a court for something, it adjourns on him. This week he appeared for the Polly Peck creditors, who were trying to get Asil Nadir,...

BOTH sides need to end this state of war on the nursery floor. The banks no longer have to defend themselves against the charge of profiteering. On the contrary; if their...

THE home counties, says. Ian Shepherd- son, are turning into Brazil. I think they look more Argentine myself, but Mr Shepherdson works for Midland Montagu, whose experience of...

Caught in the crossfire of Norman Lamont's war game with the banks CHRISTOPHER FILDES E verybody must be enjoying the war game between Norman Lamont and the banks. Everyone,...

SOME people don't know they are in business. That seems ; to include Thames Water, which still finds the idea unfamiliar. It is worried by official complaints (from its consumer...

Sir: Your leading article 'The jury is an ass' in your issue for 6 July draws attention to a situation which, for the past 20 years, has continued to be of increasing...

Sir: Caroline Sinclair's piece on Switzer- land is apt to give imbalance a bad name. While I do not for a moment doubt the authenticity of her private examples — they have the...

Sir: Although much of what Christopher Fildes writes (27 July) about the implica- tions of the BCCI affair is fair comment, some of his remarks about the Banking Acts of 1979...

Sir: May I correct a mistake in my letter of 26 July? It was, of course, Lord Donald- son, not Lord Denning, who heard the Spycatcher case in the Court of Appeal in January...

Sir: Nigella Lawson doubts that the current ability to get a table at the Caprice without booking reflects the depth of the recession (Restaurant, 22 June). Maybe; but a really...

Sir: We read with interest Mr De'Ath's account of his time in Oxford, in particular at Clark's House Bail Hostel. CAt the bail hostel'), 3 August 1991.) We have been...

Sir: I am wondering whether Simon Cour- tauld really knows Spain or whether he has wanted to present us with a well written article to make a political point. If he has...

Sir: Your columnist Taki, it seems, has just heard of Prof Martin Bernal's Black Athe- na, which was published in 1987. Bernal was for a long time a Fellow of King's, Cambridge,...

READERS were invited to indicate the grammatical errors in a short letter from the leader of the Liberal Democrats (The Spectator, 22 June). We received a bulging bag of...

Life of a best-seller

A. L. Rowse DAPHNE: A PORTRAIT OF DAPHNE DU MAURIER by Judith Cook Bantam Press, £15.99, pp.321 T his is a true portrait, as anyone who knew Daphne Du Maurier can testify :...

Between the ghetto and

the Gotha Philip Mansel FANNY VON ARNSTEIN: A DAUGHTER OF THE ENLIGHTENMENT, 1758-1818 by Hilde Spiel, translated by Christine Shuttleworth Berg, £40 , pp. 368 ♦ ienna is the...

Looking on the bright side

Andrew Clifford WOODY ALLEN : A BIOGRAPHY by Eric Lax Cape, £16.99, pp. 387 H ollywood's stars are notorious for their love of the tuck, the lift, the pinch and the implant. On...

The art of window-dressing

Patrick Skene Catling PARIS AND THE SURREALISTS by George Melly Thames & Hudson, £18.95, pp. 159 G eorge Melly is one of the ornaments of London, a jovially ageing Bessie Smith...

Scotland counts for something

John Jolliffe SCOTLAND : AN ANTHOLOGY edited by Douglas Dunn Harper Collins, £15.99, pp.304 D ouglas Dunn is a well-known poet from Fife, with a great gift for bringing his...

The war of the worlds

Tony Osman ASTRONOMER BY CHANCE by Bernard Lovell Macmillan, £18.99, pp. 380 T here is a belief, widespread at the moment, that scientific research can be judged by its...

The role of Drum

Robert Loder A GOOD-LOOKING CORPSE by Mike Nichol Secker, £17.99, pp. 401 T he impact of Henry Nxumalo's articles and the accompanying photographs of labour conditions in the...

When I was young I listened to the rain On

the Towers of Song: Red candles glowed through thin gauze curtains, Bedroom curtains, all night long. In my prime of life, I listened to the rain On the roof of a boat: From...

Tonight, at Eastern Slope, I wined too well; Half-sobered up; and then got drunk once more. Home around midnight, bang, bang, bang at the gate Brought no response but the...

In his short reed-cape that old man in his boat

Looks like some hedgehog floating on a duck As, under river-skies and far from home, He fishes, fishes, fishes without luck. For the fish, deep-burrowed into winter mud, Lie...

Last night, among the pines, I was weaving-drunk. `But how

badly drunk?', I asked some passing tree. When it lurched with a kindly offer of its trunk To steady my steps, I shoved it away from me.

Left-hand man Martin Gayford I t is hard to believe it now, but the jazz pianist and the rest of the band started off apart. Many of the early bands used a gui- tar rather...

Everybody's Fine (`12', Curzon Mayfair) Rambling on Harriet Waugh Af ter Cinema Paradiso, Guiseppe Tor- natore's new film is a disappointment. It too is an essay in...

Goddess of the river Juliet Reynolds N ot far inland from Bombay rises the north-western end of the Deccan plateau, an area that in ancient times inspired a special form of...

Karl Friedrich Schinkel: a Universal Man (V & A, till 27 October) The importance of being earnest Alan Powers G erman culture has often repelled the English by its...

When She Danced (Globe) Bohemian rhapsody Christopher Edwards M artin Sherman's play about the leg- endary American dancer Isadora Duncan is given a lavish staging at the...

Not raving but drowning Marcus Berkmann Y es, it's stadium rock season once again. As normal, sensible people retreat on holiday to escape it all, stars from across the world...

A lot to be smug about Taki Gstaad he press has of late been full of stories about the angst in the Swiss Alps, but one wouldn't know it from this beautiful moun- tain...

Too clever by half Martyn Harris T he Guardian TV listings this week described John Sessions as 'over-talented', which sounds absurd amid the deserts of the August television...

All of a doodah Zenga Longmore malara's favourite song of all time is `Camptown Races'. I wheel her to and from the market in a chorus of 'doodahs'. What sense she can make of...

Bowled over Jeffrey Bernard L ast Sunday there was a cricket match to celebrate the centenary of the Chelsea Arts Club. It was a glorious day and the game was played on a...

I DON'T know why it was that I developed, in the past few weeks, such a desire to eat Korean food. But I did, and the desire grew. At first, it had been just an envie for the...

A newspaper is running a series called 'My Favourite Village', in which European celebrities (Kurt Waldheim, for instance, or a pop star) describe their favourite rural retreat....

Over and out Frank Keating ON APRIL Fool's Day, 1974, a spindly, shy, Antiguan reported for pre-season net practice at the county cricket ground in Taunton. He had spent the...

• • Dear Mary . Q. I came up the tough, meritocratic way and, despite all odds, now have a top job in journalism. But I still seem to be socially unacceptable and am troubled...