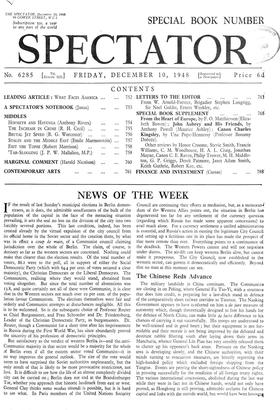 NEWS OF THE WEEK TF the result of last Sunday's

municipal elections in Berlin demon- ]. strates, as it does, the admirable steadfastness of the bulk of the population of the capital in the face of the menacing situation...

The military landslide in China continues. The Communists are closing in on Peking, where General Fu Tso-Yi, with a stoutness that does him credit, is preparing for a last-ditch...

Ineffective argument about Palestine continues in the United Nations Security Council and the Political Committee of the General Assembly. There is no hope at this stage of...

It is, or should be, usual at the conclusion of a United Nations General Assembly to attempt some assessment of what has been achieved in the weeks or months of discussion....

The possibility of revolution in France today has come to be associated with the names of the Communist Party and of General de Gaulle. But since neither of these has discovered...

It is one thing for Italy to reject a foreign policy of subservienCe to the East. It is another to accept a policy of close collaboration with the West. Formally the Chamber of...

The Commons and Conscription

The later stages of the Conscription Bill debate did not produce, and could not well produce, any new arguments. Significantly large as the number of Labour abstentions on the...

Mr. Bevan and the Dentists

A LTHOUGH the small vote on the Government's side ott the Bill lengthening national service from twelve months to eighteen was due partly to abstention or opposition from Labour...

M R. HARRY TRUMAN is a politician of many recoveries. His election to be President of the United States in his own right was so tremendous a recovery that it seems to have...

"All the greatest landscapes have been painted indoors." That seems

surprising at first sight, but no doubt it is true. At any rate the assertion has high authority behind it, for it is made by Mr. Winston' Churchill in a small volume, Painting...

The M.C.C., I see, wants an assistant-secretary, "knowledge of County

Cricket desirable but not essential." A chance for a chess

It is satisfactory that the Government is giving serious attention

to the issues raised by the artificial insemination judgement to whiclr I referred last week, though a little disappointing that the Pr Minister seems to indicate that nothing...

What I wrote here last week about the famous speech

of November 12th, 1936, in which Mr. Baldwin was inaccurately alleged to have said that he went to the country on a peace programme at the election of December, 1935, because if...

Level crossings on main roads are an intolerable scandal. When

the highway concerned is what is commonly called the Exeter Road —though it actually goes to Penzance—it is really an outrage that this anachronism should be tolerated. The...

A SPECTATOR'S NOTEBOOK M R. SIDNEY STANLEY has undoubtedly been one

of the sights of London.. I say " has been " because he has now left the witness-stand after more than fifteen hours' performance there ; he may, of course, yet be recalled....

THE INCREASE IN CRIME

By R. H. CECIL I T is often a good thing to begin a fresh examination of some much-discussed problem, such as juvenile crime, by placing it in the centre of the table and...

By ROBERT MORRISON I N the days when plumes and feathers were not considered effeminate, and when a generous and flexible brim gave scope for the expression of personality, the...

By J. P. W. MALLALIEU, M.P. Twickenham, Tuesday. W HEN I was an undergraduate at Oxford, I found it soothing to despair of Cambridge. Cambridge beat us at everything ; so we...

By HAROLD NICOLSON T HE Germans, without question, are a most ingenious race. In their long and arduous history they have become so accustomed to being deprived of necessities...

THE THEATRE ‘. Oranges and Lemons." An Intimate Revue. (Lyric, Hammersmith.) Taus admirable entertainment, which seems bound to reach the West End shortly, and to stay there...

THE Halle Orchestra played a rather unenterprising programme extremely well at the Albert Hall on December 3rd. If there is a Palm Court in heaven (and there will no doubt be a...

IT was in the aftermath of the blitz that Mr. John Piper, now exhibiting at the Leicester Galleries, found his sublime and his beautiful, and commenced that long series of...

Tins is the time of year when gramophone records assume a new importance, I mean as potential Christmas presents ; and in going through the new lists I have tried to bear this...

THE FUTURE OF ERITREA

SIR, —Such of your readers as know anything about Eritrea will realise that Mr. Wise's analysis—and his fears—which you print in your issue of December 3rd, are accurate. Some...

SIR,—Does Mr. Happold really mean that examining bodies are so

much at the mercy of their candidates that a sufficient number of failures will lower the standard of an examination ? If this is indeed so, why should this be confined to the...

A FREE NATIONS PACT Sm,—My friend Dr. Maxwell Garnett points out that, under article 53 of the Charter, force may only be used by a regional group of States subject to the...

BOSWELL ON THE NORTHERN CIRCUIT

SIR, —The article by the Master of Pembroke College, Cambridge, on Boswell Revealed will be read with special interest by members of the Northern Circuit, one of whose most...

Sta,—The Headmaster of Bishop Wordsworth's School has undoubtedly given the real reason for the minimum age limit in the new General Certificate.of Education. All for the sake...

Sm,—Although I cannot agree with Tony Gibson about the " moderating process " within the Comnlinist regime in China, I can agree with him about the liberal elemenis in le "...

SIR, —It is not on personal grounds that I resent the suggestion of Mr. C. M. Woodhouse that "few of us could emerge unscathed from the Attorney-General's scrutiny of at least...

Slit —A copy of The Spectator for November 26th has just reached me, and on page 700, in Country Life there is a rather sceptical note entitled The Invincible Dowser, which...

Sit,—Cannot something be done about this ill-used word ? It is a com- bination of the dative and accusative of the Anglo-Saxon relative pronoun, and, according to the Oxford...

Sit,—In your issue of November 19th appeared a letter to you on what Dutch is like. That letter contained a translation into reputed Dutch of a sentence from Hamlet. I may have...

Richard Jefferies means so much to so many countrymen that I cannot forbear a brief reply to one of his critics, because the criticism evinces so strange an inability to...

Sut,—Turning the pages of an earlier Spectator, I noticed a letter from my friend Professor E. A. Walker on the spelling of the word " Afrikaner," in the sense of a South...

SCOTT OF THE ANTARCTIC

SIR, —I was somewhat irritated by the description of your film critic, in ' her notice of Scott of the Antarctic, of Scott's effort as a " glorious and, to my mind, purposeless...

Slit,—Peter Campbell, discussing The Odds for 195o, says that, "when there are only two major parties, our electoral system gives the more popular of those parties an unduly...

YOUR CHRISTMAS GIFT. WHY NOT A SUBSCRIPTION TO "THE SPECTATOR"? Subscription rates for Gt. Britain and Over- seas by ordinary mail Air Mail to Members of the Forces in any...

A Devonian, dwelling inland, is clearly astonished by the appearance of a single sea-gull that squats on the lawn and roosts there. Herring gulls seem now and again to isolate...

SIR, —Owing to an unfortunate misprint on page 7 of the catalogue of the Richard Wilson Exhibition at Birmingham, there is perhaps some cause for your art critic's confusion...

All modern children should be naturalists in some sort. Almost every example of literature, so-called, designed for children at Christmas has contained, so far as I have seen,...

In the Garden A December bouquet from the garden could

this year be made up, not only of chrysanthemum but of kex, winter jessamine, polyanthus, rose and iris, as well as flowers from a number of flowering shrubs, including...

A urruz ceremony, resulting from the wise aestheticism of the small- - holders and such, in the neighbourhood of their headquarters in the Sandy and Biggleswade district, seemed...

Heart or Soul ? From the Heart of Europe. By F. 0. Matthiessen. (Oxford University Press, New York. I 6s.) PROFESSOR MATTHIESSEN, of Harvard, - -- was in Central Europe from...

Christmas Bookshelf Barnaby in Search of a House. By Racey

FOR those who can manage to read other books than the latest Hollywood scenario or the not always reliable memories of the most recently retired politician, Anthony Powell's...

MOST writers, it may be supposed, have in the last few years been kind to the Victorians, to make up for the stage of undeserved contumely through which our forebears had...

M. SARTRE is writing about the Jewish people and how difficult their Situation is made by reason of the Chffstians' hating them so much and being anti-Semites. He says that the...

The Art of the Greeks

Approach to Greek Art. By Charles Seltman. (Studio Publications. 25s. ANCIENT Greek art is unique in one accidental respect that has nothing to do with its quality. The...

IN spite of a recent volume on the same subject, which has already been noticed in these columns, Mr. Oppe's is the first serious and critical attempt to catalogue Hogarth's...

Recovery of Man. By F. R. Barry. (Nisbet. 8s. 6d.) Tint Bishop of Southwell has written a brave and timely book, brave because the obscurantist reaction in theology has not yet...

Where Shall John Go ?

MR. Ross and Mr. Minton went to Corsica in the summer of 1947. They travelled by bus, by train and once rather angrily on foot, to nearly all the towns and villages of any size...

THE " picture-book " upon which Paul Nash was engaged towards the end of his life now appears, with shifted emphasis and slightly hushed air, as a memorial volume, with a...

THE Lees Knowles Lectures on Military History given by Admiral James at Cambridge in 1947 bear a title which does little to indicate their contents. The first of the three...

Light on My Days. An Autobiography. By Georges Duhamel. Trans- lated by Basil Collier. (Dent. 15s.) READERS of M. Duhamel's novels will not be disappointed with this translation...

THE core of this work is a marshalling of evidence from the history of religions in order to throw light on the problems of today. It assumes that the study is sufficiently...

Two Views of S - cotland IT is a good idea to

read these two books together. For one thing, the eight-mile-to-the-inch map tucked in the end of Mr. Fraser's book will elucidate Mr. McLaren's wanderings as well as his own,...

• Tars book is exactly what such a book should be. Leicester's Pub- licity Department is to be congratulated on having persuaded so readable a scholar as Mr. Ellis to write it,...

6d.) REGULARLY every two years or so a remarkable comet startles the darkness of the literary heavens. Accustomed to the orthodox con- stellations, to a fixed recognisable...

[A Book Token for one guinea will be awarded to the sender of the first correct schition of this week's crossword to be opened after noon on Tuesday week, December 21st....

By CUSTOS FROM being a topic for academic discussion the problem of assets replacement in conditions of high costs and heavy taxation has now become an issue of major practical...