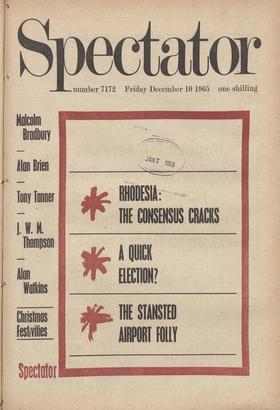 THE. CHINESE again accused the Russians of play- ing the American game in Vietnam, and Mr. Smith reversed the charges so to speak, accusing Britain of playing the Communist game...

T HE big show,' commented Izvestia just after Mr. Stewart left Moscow, 'will come later, when Bonn and Washington meet.' hvestia is perfectly right. Events in Europe during the...

Farewell to the Steel Industry . ROY II A TTERSLEY, MP Thomas Hardy JOHN HOLLOWAY One year's subscription to the 'Spectator': £315s. (including postage) in the United Kingdom...

Now We Are Married From MURRAY KEMPTON ' T HE National Association of Manufacturers, for generations the symbol of private in- dustry's resistance to the aggressions of...

Rhodesia: the Consensus Cracks rrHERE iS more to a bipartisan policy than I having the Opposition stand idly by while the Government improvises from day to day. There has to be...

Fleet Street Baby-sitter CHARLES CURRAN writes: Editing a newspaper for a Press Lord is,like being married to Henry VIII; a brief blaze of uneasy glory, then a sudden,...

A Quick Election? By ALAN WATKINS A N early general election is now being . ,,.seriously talked about, by ministers and back- benchers alike. Mr. Harold Wilson, it is...

The Chief Effect of Horace King Was keeping Members on a string. He bade a Secretary of State Confine himself to the Debate, And told Front Benchers that they ought To keep...

By J. W. M. THOMPSON `rrHE Government has an open mind on this 1 question,' the public inquiry into the con- tentious proposal to make a third international airport for London...

If you read Soviet Chess by D. J. Richards (O.U.P., 25s.) you will learn much about chess and more about Communism. Study, for example, the telegram sent to Stalin by Botvinnik...

Unlike some journals of opinion in this c ountry we are not compulsively anti-American; over the last twenty years we have, in general. supported American foreign policy, just...

T ALWAYS enjoy the explanations offered by Ithose who direct public opinion polls, when they begin to realise that their results are wildly at variance with the facts of life....

Unquiet on the Western Front

From. SARAH GAINHAM DONN J UST as it is no longer considered possible to discuss national policies without including economics, so it is difficult to discuss foreign policy...

Civic Trust There may be some good reason for refusing

the request of the formidable all-party dele- gation led by Duncan Sandys to Charles Pannell, Minister of Works, for a public inquiry into the development plan for the Whitehall...

The Jones Boy A mutual friend tells me that in

his view the criticism of Aubrey Jones that is prevalent today is unfair. I agree. The criticism should be aimed at the Government. The Government made a shrewd choice when it...

I Have Answered Three Questions and That is Enough

By MALCOLM .BRADBURY TN these days of the brain-drain, when the Eng- 'fish university teacher in his academic fastness is tempted by attractive offers to cross the Atlan- tic...

an settlement of an action brought by Mr. I Justice O'Hagan, a judge of the Eastern Cape Division of the Supreme Court of South Africa, against the Spectator Ltd., and Mr. Lain...

The Gobbler Gobbled By HUGH JOHNSON CHAUCER'S Reeve is the chap I admire. It snewed in his hous of meat and drink. I've heard so many people say this year that they're not...

To Grace Any Table By ANDREW ROBERTSON I do not wonder that there are men (no women, yet. I think) called Masters of Wine, for it is a great mystery. Edward Hyams, in his new...

SIR,—This becomes tedious, not to say shrill. Doe , , the Duchess of Hamilton not agree that the Arch- bishop of Canterbury's remarks on the Rhodesian dilemma were in many cases...

SIR,--Koestler's version is, of course, long-winded; but so is Brien's. The correct (i.e. most economical and truest to Yiddish speech rhythmsrpunchline is 'Oedipus-Shmoedipus I...

SIR,—Enid Lakeman and her friends should stop misrepresenting the result of the 1951 election. As I wrote in the Annual Register at the time: 'The Liberals polled 1,890:938...

SIR,—There has only now been brought to my atten- tion the review by Mrs. Sylvia Sprigge of the selected letters of Bernard Berenson edited by A. K. McComb in your issue of June...

The Theory of Humour

S1R,—Alan Brien successfully challenges Arthur Koestler's analysis of the joke about the Indian's coded smoke signals to his accomplice in the poker game. Koestler certainly...

SLR,-A remarkable letter by Miss Vanessa Red- grave in a recent issue of your paper has just come to my notice. It contains an account of the coming to power of the Brazilian...

SIR,-Attemptin g to find a companion to sit (at 55. 6d. per hour with expenses paid) with an eighty- nine-year-old woman in the geriatric wing of a well- known private mental...

SIR,--The sooner we can impose-and enforce-a 70 m.p.h. speed limit on all public highways the better. High speeds are all right for a fast car driven by a good driver where he...

SIR.-Quoodle, disconcerted, no doubt, by the irritating tendency of events

in Rhodesia to happen at a time inconvenient for the Spectator, and by the inexplicable success of Mr. Gunter in discussions with the bakers' leaders, has used a singularly un-...

SIR,-I should be grateful if any of your readers could provide me with information about the rela- tion-if any-between the age at which a woman marries, and her physical beauty....

SIR,-Brian Crdzier, somewhat out of his depth in reviewing Nkrumah's Neo-Colonialism, begins by stating that `Dr. Nkrumah is known in Ghana as the Redeemer.' The word osagyefo...

The Splits By TERENCE BENDIXSON N EW British embassies are just now at varying stages of construction in Madrid, Stock- holm and Oslo. The credit squeeze has put a stop to Sir...

Living and Partly Living W HAT about Murder in the Cathedral? I was myself out of Britain in the 'thirties, so that the Third Programme's current series* is for me largely an...

What a Performance! a() GOBBI'S costive production of Simon T Boccanegra, with himself in the lead, has been caned enough. No stripes shall be added by me. Some of my...

As a reader you may have the Spectator sent to your friends, in any part of the world, as your Christmas or New Year Gift for a year (52 issues) for almost half the normal...

Blood Thick and Thin The Battle of the Bulge. (Casino, 'A' certificate.) — Answer to Violence. (Academy Cinema Club.) MHERE are conventions in routine war films I just as...

By TONY TANNER p is somewhat shaming that this unusually 'thorough and appreciative study of Sterne's work should have been written by a Frenchman.* Shaming, too, that...

A Cupful of Tears : Sixteen Victorian Novel- ettes. Selected by Martin Seymour-Smith. (Wolfe, 25s.) INTRINSIC knowledge of others is the novel's marvellous gift. The...

or Liberal by Definition This is the solid-looking quagmire The bright-green ground that tempts the tread And lets you down into despond. Enough consistence to conform, Enough...

JOHN BINGHAM and Judson Philips have some- thing in common: they are both aware of the terrors and dangers that lurk under the skin of civilised living, ready to claw down the...

By CUSTOS Canadian Bank rates hit the gill-edged market more severely than equity qiaro. Hopes had already been fading of an early reduction in the British Bank rate, but this...

The Dearer Money Fracas By NICHOLAS DAVENPORT klo wonder President Johnson is angry! The NFederal Reserve Board has put up its re- discount rate (the equivalent of Bank rate)...

M - 12: GARFIELD WESTON, chairman of Asso- ciated British Foods, points out in his annual report that the South African and Aus- tralian interests were mainly responsible for...

Boot's R oute By STRIX YEARS ago — perhaps a hundred: perhaps more, perhaps less—a man lived in an isolated cottage be- side the road that passes through our village. He...

By LESLIE ADRIAN JUST what we arc storing up for ourselves when we use unfainiliar chemicals in food, drinks, cosmetics and even glues and pol- ishes that come • in contact...

By ALAN BRIEN I HAVE not been to my Health Club for over a fortnight and already I feel like a deserter—one of those lazy rotters who stayed at home for Agin- court and so...