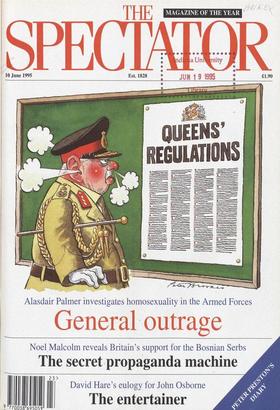 M r John Major, the Prime Minister, gave his 'full support' to Mr William Waldegrave, who is the Minister for Agri- culture, when the British Broadcasting Cor- poration...

It is those moments of moral agony which best expose a man's (or a minister's) character BORIS JOHNSON Y ou're in the car with your secretary after a party and trying to...

PETER PRESTON A meeting to discuss a bit of anodyne, extraneous business with a Tory life peer and ex-Cabinet minister. 'We've known each other for a long time,' he says sooth-...

The legal conspiracy which makes fools of us all AUBERON WAUGH B efore the trial of the Maxwell broth- ers, Kevin and Ian, and two others opened at a court specially prepared...

Alasdair Palmer investigates the Armed Forces' objections to homosexuals, and finds they are based on myth, not fact THIS WEEK, Lord Justice Simon Brown ruled against three...

I DON'T KNOW what it is about Spec- tator readers, but as soon they come across a 'naughty' word they leap to their typewriters. And one that I am glad did was Mr John McDermott...

I SUPPOSE every scribbler, no matter how much of a hack he may be, secretly harbours a desire for a measure of liter- ary immortality. To be remembered for a book — no, for a...

'THE WHOLE LOT OF THEM ARE SERBS'

Noel Malcolm describes the anti-Bosnian disinformation campaign being conducted by the British Government and the UN MY AMERICAN friend was puzzled; and, as someone familiar...

Will of the week.

On the anniversary of his imprisonment, Zulikat Wuraola Abiola, the daughter of Nigeria's elected president, calls for her father's release ON 12 JUNE 1993, my father, Chief...

THE PEOPLE'S REPUBLIC OF DISNEY

Christian Caryl fears that a great American company may be slipping into terminal decline Orlando OUR DAY half over, my girlfriend sighed philosophically. As part of our...

A LIFELONG SATIRIST OF PRIGS AND PURITANS

David Hare's eulogy for John Osborne, given at the memorial service for the author in London last week 'I've an idea. Why don't we have a little game? Let's pretend that we're...

A WOMB OF ONE'S OWN

Caroline Richmond denounces the doctors who perform hysterectomies on women without asking their permission LAST MONTH, Mr Reginald Dixon, a consultant gynaecologist at...

The feminist world war has begun PAUL JOHNSON T he War of the Women entered a new phase last week. Germaine Greer started her counter-column on the Times, and her enemy...

LETTERS Time to speak out

Sir: The resurrection of the Aldington/Tol- stoy affair in your letter columns recently (Letters, 3 June) causes me to hope that Alistair Home, or someone else with a par-...

Sir: In his generous letter about the Tol- stoy/Aldington affair,

Alistair Home says that the two things puzzled him in my recent article. Why did I not make my anger at the repatriations known sooner? And why did I not share the blame for...

Sir: Christian Caryl objects to David Pryce- Jones's masterly The War that Never Was because he dislikes its tone — that of an 'avenging angel' (Books, 6 May). Well, some...

Sir: Andrew Kenny ('Why murder is wrong', 13 May) underlines the cruelty inherent in the slaughtering of animals. A few days ago, at the Kidepo game park on the Uganda-Sudan...

Sir: I wish to add some context to Christo- pher Corbett's article (`Spam, Spam, Spam, Spam', 22 April). If he had attempted more than free advertising for the Hormel Co. your...

Sir: Lawrence Marks's article on the National Film Theatre (Arts, 3 June), which draws rather selectively from the information given to him during our inter- view, gives a...

Sir: While the punishment for non-payment of the television licence may appear severe ('Britain's most dangerous women?', 20 May), the appalling cultural consequences of life...

Right — not Wong Sir: As a new arrival in

Hong Kong, I find it interesting how everybody writing about the territory seems to know more about our business than we do ourselves. Martin Van- der Weyer does not let the...

Sir: Boris Johnson's readings in Italian history take him along strange paths indeed (Politics, May 27). Or is it that the temptation of a saucy title en plus is irre-...

Sir: I don't know why you put 'Last word' over the letter from the 'impudent gutter- snipe'. If a man called Morgan hotly denies he is Welsh, he obviously needs watching —...

Sir: In the interests of historical accuracy, the front-cover illustration (20 May) of MPs rowing a four-level galley simply won't work — with or without the aid of Whips. It...

The daft debate about why today's young people are so dreadful SIMON JENKINS A n old New Yorker cartoon has a father reading his son's school report. The report is clearly a...

Sledgehammer to crack a nut

Jonathan Mantle JEFFREY ARCHER: STRANGER THAN FICTION by Michael Crick Hamish Hamilton, £17.50, pp. 456 T his is a strange book, but then, as its subtitle acknowledges, lives...

Not just an irksome Swede

Hugo Vickers GARBO by Barry Paris Sidgwick & Jackson, £20, pp. 654 B any Paris is one of the few film-star biographers who writes with style and panache and does not get bogged...

Patrick Skene Catling DONKEY'S YEARS: MEMORIES OF A LIFE AS STORY TOLD by Aldan Higgins Secker, £14.99, pp. 336 A idan Higgins husbands his literary resources. There is a lot...

The cross as the focus of longing

John Colvin A TIMELESS PASSION by Naim Attallah Quartet, £10, pp. 146 N aim Attallah is that rare bird in English skies, a Roman Catholic Arab from Palestine. He has managed...

Helen Osborne THE LOST SUMMER by Charles Duff Nick Hem Books, £18.99, pp. 288 O wn up if you have never seen a play called The Holly and the Ivy, which reperto- Frith Banbury,...

Fame was the disastrous spur

Mark Steyn LEONARD BERNSTEIN: A LIFE by Meryl Secrest Bloomsbury, £19.99, pp. 471 A friend of Leonard Bernstein's remembers being with him one summer's day in the Piazza San...

Where do we go from here?

Will Hutton SATURN'S CHILDREN by Alan Duncan and Dominic Hobson Sinclair-Stevenson, £16.99, p. 448 R outing your enemies can be a disorienting experience, especially if you...

—Yet still we edge down clutching Special clippers to collect it, Hoping to find it hanging out Where rib one would expect it, Looking to catch it unawares, All richly green,...

Australia Brush up your har-mo-nee Rupert Christiansen looks at the problems facing Paul Keating and his visionary policy for the arts P aul Keating has got culture the way...

(Open Air, Regent's Park) A curious chapter Sheridan Morley T he problem with Fiona Shaw's Richard II (on the National's Cottesloe stage) does not have much to do with sex or...

Japanese Studio Crafts: Tradition and the Avant-Garde (V&A, till 3 September) All of a flutter Tanya Harrod T he Japanese crafts revival began — like the British Arts and...

Billy Budd (Covent Garden) Hello, sailor Martin Vander Weyer A new opera with an 18th-century naval theme must have sounded like a splendid idea to the commissioners of the...

The heart that counts Alistair McAlpine O n 14 July Christie's are selling an early painting by the late Sir Sidney Nolan who is rightly regarded as one of Aus- tralia's...

All a matter of class Nigella Lawson F irst Tony Blair, now the makers of tele- vision soap: everybody's wooing the middle classes. Of course it makes us all very happy: at...

A game of patience Jeffrey Bernard I received some bad and discouraging news last week. Well, not discouraging, it is too late for that, but I wish I had been told it in my...

A season of small talk Taki Now there is nothing like a child's smile when he or she feels a bit embarrassed when meeting adults. It's innocence, sweet- ness and beauty...

Hair cut crisis Carole Morin I have always known I'll die in a car crash while driving alone in laned traffic. Of course I could be making a mistake. There's a hideous...

Don't mention the dead Nigel Nicolson A n old lady dies, and her relations gather from all corners of the land where chance has scattered them, some her children, some their...

Led by lords Andrew Robson THE ANNUAL LORDS versus Commons bridge match was set up 21 years ago by that most remarkable of female bridge stars, the late Rixi Markus. The match...

Take my word for it Auberon Waugh T his may not be the cheapest offer we have ever had, averaging out at £5.81 a bottle on the sample case, or £5.31 on the Brett-Smith...

'WHY IS IT that everything seems to taste more delicious in the fresh air?' The picnic season is here and cookery writers are going on about picnics. Though we have all been...

Lett there be fight Raymond Keene THE HEYDAY of gambit play was the 19th century, when gambits such as the Evans, King's and Vienna were mighty denizens of the chess...

ISLE OF ili RA ,,. U 114LI sCOICH UNISX1 COMPETITION How to Jaspistos IN COMPETITION NO. 1884 you were invited to provide an extract from an awful example of the genre of...

1213: Anag or anag by Mass A first prize of 125 and a bottle of Graham's Late Bottled Vintage 1988 Port for the first correct solution opened on 26 June, with two runners-up...

Dear Mary. . . Q. The practice of celebrating one's birth- day by inviting friends to a restaurant and then asking them to split the bill seems to be on the increase....

Incomparable Jomah Frank Keating Cape Town I WAS here in the Deep South for just over a week last year to take in England's two Rugby Test matches against the Spring- boks....