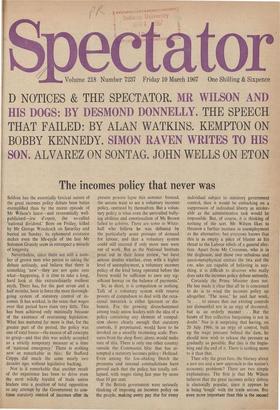 Seldom has the essentially farcical nature of the great incomes

D Notices and the 'Spectator' A certain amount of interest

appears to have been aroused by the publication, in last week's SPECTATOR, of the two D Notices first referred to by the Prime Minister in the House of Commons on 21 February....

The results of the first ballot in the French elections give no comfort to those in Britain (and there were many in high places) who were hoping for a rebuff to General de...

GENLRAL DI GAULLE swept halfway home in France with a majority which looked already nearly as fat as before. Mr Wilson consoled him- self with a day-trip to Luxembourg, where he...

The Speech that failed

POLITICAL COMMENTARY ALAN WATKINS Writing recently in the SPECTATOR, Mr Robert Blake suggested that historians asked the wrong kind of questions. Instead of trying to explain...

CHRISTOPHER HOLLIS It is reported that owing to the defeat of Mr Kamaraf and other Congress leaders Mrs Gandhi's position as Prime Minister has been somewhat strengthened....

Mr Wilson and his dogs

DESMOND DONNELLY, MP When I entered the House of Commons, seventeen years ago, I was approached by a senior Labour minister. 'You're Donnelly?' asked the minister....

From the 'Spectator,' 9 March /867 The Wash- ington Senate, which has taken lately a moderate turn, though steadily adhering to its main objects, has actually sustained Mr....

AMERICA MURRAY KEMPTON 'A few days ago the winners of the annual White House News Photographers' contest filed into President Johnson's office to have their pictures taken with...

In for a month

PUNISHMENT GILES PLAYFAIR The sad little case of Mrs Eileen Baker, which fleetingly occupied the headlines and the tele- vision screens, has ended anti-climactically. Her...

TURKEY KEITH KYLE Keith Kyle has recently visited Turkey on behalf of Amnesty. Sadi Alkilig was a minor Turkish civil ser- vant in his late fifties, in charge of the stores of...

J. W. M. THOMPSON Soon after Mr Crossman had been tormented by his own backbenchers for the better part of an hour in the Commons last week (on the mysteriously inflammatory...

THE PRESS . DONALD McLACHLAN I must not, I know, talk politics in this column; but before I offer my humble advice to the newspapers, may I ask them and the politicians one...

TELEVISION STUART HOOD One man must be relieved at the PMG'S decision to allow ay to duplicate its trans- missions in colour. It is Lord Hill, for had the decision been left in...

THE LAW R. A. CLINE Last week a doctor asked the High Court to support his contention that his travelling ex- penses should be deducted from his assessment for income tax. He...

PERSONAL COLUMN SIMON RAVEN MY DEAR BOY, Very shortly now I must congratulate you on your fifteenth birthday. Fifteen will be a difficult age for you, I think, as it is the...

A. ALVAREZ Anyone who had only seen Susan Sontag on Monitor or read about her in Time would probably imagine a kind of New York Brigid Brophy: a lady, that is, with an eye...

The Turn the Novel by Alan Friedman

Open and shut cases ANTHONY BURGESS (OUP 45s) It would be pleasant, so some of us think, if the novel could be a kind of Faberge artefact, totally cut off from wearisome...

JOHN ROWAN WILSON Last year Pamela Hansford Johnson was asked by the Sunday Telegraph to spend a day or so at the Moors murder trial and write of her impressions. The trial...

DESMOND FISHER The R.Cs. by George Scott (Hutchinson 35s) It is only a little over one hundred years since the last major discriminatory measures against Roman Catholics were...

FRANCIS HOYLAND I find it hard to write about a man who was as badly treated by the art world as David Bomberg was, without losing my temper and swiping out at all and sundry....

Shrewdly cut' PENELOPE HOUSTON Anyone who has ever managed to catch up with the Fairbanks-Pickford Taming of. the Shrew will remember one justly famous credit title: the...

CHARLES REID People have been so busy writing about the look (tiresome) and sound (prodigiously good) of Queen Elizabeth Hall, the South Bank's new 1,106-seater, that Herbert...

NICHOLAS DAVENPORT In the old days the National Institute of Eco- nomic and Social Research used to play the role of social conscience in the contemporary economic debate. It...

CUSTOS This is the season when stock market prices are blown hither and thither by budget rumours. The gilt-edged market has for the moment shrugged off the rumour that Mr...

JOHN BULL If you ask an oilman what has been the roost worrying event in his industry during the past ten days he will mention the Iraq Petroleum Company settlement with Syria...

Sir: Why is there all this fuss about D Notices

concerning the Post Office reading cablegrams and any other sources of information that pass through its hands? The collecting of information in this way has been, and probably...

Mr Wilson and the press

CONSUMING INTEREST LESLIE ADRIAN It depends on your social conditioning whether not to be able to tell marge from butter is a good or a bad thing. Eating in a well-known,...

that I was approached about a possible candidature at Pollok. He is incorrect in the form of refusal he attributes to me. My refusal was immediate and unconditional. although I...

Sir: As a journalist Mr Patrick Hutber might have been

expected to examine the issues at Barnsbury from all sides before rushing into print. He might then have found it unnecessary to accuse officials of the Ministry of Housing, of...

Sir: I believe Anthony Burgess lives in East Sussex. If he had done his homework among this county's schools he might have found that things had changed, and have been hard put...

Sir: How right is Mr Thompson (Spectators Notebook,' 3 March) to upbraid the National Union of Teachers for their bigoted attitude to public schools' It is sad to see the...

Sir: If T. S. Eliot was wrong to say 'jtivescence

Sir: As chairman of the Barnsbury Association I would like to congratulate you on the splendid article by Patrick Hutber, 'The Barnsbury Scandal' (3 March). The association was...

How to choose an architect Sir: In applying the word

'falsity' to a kind of building he dislikes Mr Manser (3 March) adopts the tone and the moralistic outlook on architec- ture of Pugin and the Gothic revivalists—an approach even...

The fall of Adam

Sir: I regret that in my letter on the case of the Rev and Hon Adam Clayton Powell the word Negro continuously appears with a lower-case Initial, which may suggest that I...

Sir: A rather puritan-sounding gentleman wrote from North Wales last week that the Afterthought- man, John Wells, 'has got breasts on the brain.' What red-blooded,...

JOHN WELLS One of the most quietly sympathetic of my colleagues during my time as a schoolteacher was the housemaster from next door. Unlike the more traditional old Eton...