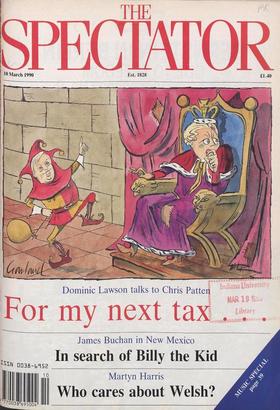 Peine forte et dure A rthur Scargill denied allegations that he and the general secretary of the Nation- al Union of Mineworkers, Peter Heath- field, had both partly financed...

MARTYN HARRIS W atching Peter Morgan, as he deli- vered his scorching attack on the liberal establishment at the Institute of Directors last week, I thought he looked every inch...

Chris Patten talks to Dominic Lawson about Mrs Thatcher, the poll tax and Conservatism IT BEGAN like this: `Mr Patten, I'd like to ask you about 20 questions.' `Aha. What is...

Storms in the greenhouse IT APPEARS to be our current mode to ascribe the recent violent storms to the greenhouse effect. However, the Climatic Research Unit at the Universi-...

Jacek Holowka argues that Poland does not need charity, but hard-headed investment by Western companies Warsaw THE countries of Eastern Europe have finally dismantled...

ROUBLE-A-JOB Lesley Chamberlain discovers that the ideas of Baden-Powell are replacing Marxism in Eastern Europe ACROSS Eastern Europe thousands of Boy Scouts are emerging...

James Buchan tries to hunt down a 19th-century American desperado Fort Sumner, New Mexico IN SECOND-HAND bookshops in Santa Fe, New Mexico, of which there are a startling...

HOME, HOME ON THE GRATING

James Bowman meets the people on the streets of the American capital Washington PRINCE Charles came to Washington the week before last to engage in a spot of...

Harry Phibbs argues that the homeless should be left alone A STOCK passage in any shadow Cabinet minister's speech or bishop's sermon these days draws attention to what, they...

Alistair Miller on the lack of life in our national passions BEFORE we are swallowed up and fully digested into a united Europe, it is time that we came to some view as to...

A LETTER by Mr Arthur Jevons in Monday's Times calls attention to the improper conduct of the Clyde Trustees in pouring all their sewage into Loch Long, by which means that...

Stan Gebler Davies on Ireland's renewed claim to rule part of the United Kingdom Kinsale THE Supreme Court of the Republic of Ireland has just laid claim to Northern Ireland,...

BOOKS BY THE BILLION

at a survey of publishing giants, many with sore heads IT IS not true, as disgruntled authors maintain, that publishing has recently been overwhelmed by big business. It has...

I AM disturbed to learn that the most popular television advertisement in Japan is for a health tonic called Regain. The ad has a jingle which runs: 'Can you keep it up for 24...

Fraser, Guinness and the tree-surgeon show three rival models of justice CHRISTOPHER FILDES I can find it in myself to feel sorry for Malcolm Gooding, who left the City to...

A FRIEND on Wall Street telephoned me the other day: was it true, he wanted to know, that an unspecified number of Cabinet ministers were resigning over the poll tax? The...

THE House of Fraser report is damning. Large chunks of the City, Whitehall, West- minster, and (let us face it) the financial press were all fooled, and some of the dupes were...

THE young Peter Walker was posted to the Department of Trade and Industry, when the idea was (as it so often is) to turn that old regulatory ragbag into a Depart- ment of...

several errors in areas where a cub reporter might have had the initiative, and indeed the courtesy, to check the facts. Henry's planned trip across America with a '20-year-old...

Sir: Your leader of 24 February is a little unfair to the British Government's current policy on Hong Kong, It is easy cynically to bash Foreign Office Sinologists, but the old...

Sir: I was astonished that The Spectator should publish such a tasteless article as that by George Gale on Henry Fairlie (to whom I was married and lived with for 17 years). In...

Sir: I'm sure that by now all your readers have

been made aware that Auberon Waugh is away writing his autobiography. So for the future, could we take it as read? Ludovic Kennedy Ashdown, Avebury, Marlborough, Wiltshire

Sir: Wallace Arnold. I'm sorry I started this correspondence (a 16-word letter, 4 November 1989). It is now more boring than the man himself. Please stop both. C. A. Bosset...

Sir: At my school you disclosed the profes- sion of your father if he were a country clergyman, an admiral or a race-horse owner. But I, traitorously, kept quiet, since my...

Sir: I was vastly amused by Dominic Lawson's witty penetration of the arcane trivialities of Mensa (Neils sano in cor- pore sano', 17 February). I am a chess Grandmaster and am...

Sir: It seems that with the sad disappear- ance of

Fleet Street as we knew it, other traditions also have vanished. How many times was I told, 'Yes, but dog does not eat dog'? Now, alas, dog is ready to eat even dead dogs. Even...

Sir: If the counter girls in Boots are reporting buyers of large amounts of nail varnish remover ('A nation of narks', 17 February) they are wasting their time. Apart from being...

Sir: The Spectator has been particularly enjoyable in recent weeks. I hope Auberon Waugh has got several more volumes to write. J. A. Falk Clays Farm, 6 The Clay, Easterton,...

The making of a High Tory Colin Welch TITMUSS REGAINED by John Mortimer Viking, £13.99, pp.281 M r John Mortimer once described himself as 'a champagne socialist'. As such,...

When is a secret not a secret?

It all started at a dinner in Palermo

Caroline Moorehead THE MAFIA: THE LONG REACH OF THE INTERNATIONAL SICILIAN MAFIA by Claire Sterling Hamish Hamilton, £15.99, pp. 384 C laire Sterling cduld not have picked a...

Harriet Waugh THE WIMBLEDON POISONER by Nigel Williams Faber, £12.99, pp.307 T here is a small but distinguished group of novels which hovers on the borderline of crime...

The great expectations of young Pip

Richard Pankhurst A FAR COUNTRY: TRAVELS IN ETHIOPIA by Philip Marsden-Smedley Century, £14.95, pp. 210 F ar-off Ethiopia, the country of the Queen of Sheba and of Prester...

Mary Henderson A PLACE FOR US by Nicholas Gage Bantam, £14.95, pp. 419 N icholas Gage's Eleni was a monu- ment to his mother who was executed by the communist guerrillas. It...

The poet is counterfeiter, Counterfeits so well He counterfeits the sorrow That for him is real. And those who read his poem Feel not what he felt, They feel its single sorrow,...

Here is an entertaining competition with a prize of fine wine worth £1,000. The competition is open to all readers of The Spectator, aged 18 and over, subject to the rules...

Mu s ic 1 Notes from the Revolution Peter Phillips examines the changing prospects for music in Eastern Europe I t occurred to me, as I paced the streets of Prague, that great...

Cut down to size Rodney Milnes A t Covent Garden the curtain rises on a corrugated iron sewer in which an army of slatternly charladies is scrubbing furiously (and some of...

Eyebrow, lowbrow Marcus Berkmann T anita Tikaram, the dusky songstress and noted Leonard Cohen fan, has become something of a natural target for rock critics, who appear to...

Landscapes from a High Latitude: Icelandic Art 1909-1989 (Barbican Concourse Gallery, till 8 April)) Keith Grant: Paintings of the Arctic and the Desert (Crane Kalman, till 17...

Born on the Fourth of July (`18', selected cinemas) Telling it like it was Hilary Mantel o film about Vietnam stands on its own merits now; as soon as it is released, the...

Peer Gynt (Olivier) Bus Stop (Lyric) Flight of fantasy Christopher Edwards T he first thing to be said about this revival of Ibsen's Peer Gynt is how well it is made to work...

Unhappy ending Wendy Cope I t's a bright morning in Manchester unusually bright, if my experience of this part of the world is anything to go by and I have been gazing out...

Mistaken identity Taki Gstaad h ehe last time I failed to see Farah Diba was in 1970, when I was kidnapped from Gstaad while helicopter-skiing and flown to St Moritz against...

Stop that tickling Zenga Longmore A ny confidence I ever had in my mothering abilities has taken a severe bruising since Wilbert returned from the most beautiful part of the...

Star turn Jeffrey Bernard A nd so to Tom Conti. We had a drink on stage last Friday night after curtain down to say goodbye to Peter O'Toole and I shall miss him, but Tom is...

in last week's letters that they still bring the plough to the church on Plough Sunday at Pevensey Church accompanied by a, nice old prayer that the Greens might well take up as...

No tomcat or rats' tails, but classic taste Auberon Waugh F ive excellently cheap wines from Au- stralia with a classic from the southern Rhone thrown in, if only for the...

Best Boris Raymond Keene K asparov managed to stay on top of the category 16 tournament in Linares, Southern Spain, but only after he had been given something of a fright by...

Child's-eye view Jaspistos I n Competition No. 1615 you were in- vited to describe amusingly an animal, Insect or bird through a child's eyes and in childish language. The...

In modern education there is a trend towards pupils judging teachers rather than the other way round. Soon, perhaps, pupils will write reports at the end of term. Kindly supply...