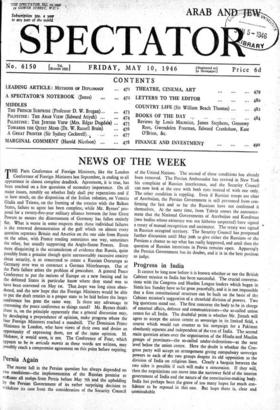 It cannot be long now before it is known whether or not the British Cabinet mission to India has been successful. The crucial conversa- tions with the Congress and Muslim League...

The recent lull in the Persian question has always depended on two conditions—the implementation of the Russian promise to evdtuate all troops from Persia before May 7th and the...

The Civil Aviation Bill owed its easy passage to a second reading in the Commons to the fact that there is no obvious case against public control rather than to any intrinsic...

The Bill for the provision of a limited number of new towns, with an average population of some 50,000 each, had a smooth passage through the House of Commons on Wednesday. That...

The comprehensive scheme for the building of new or the complete reconstruction of existing arterial roads, outlined by the Minister of Transport in the House this week, is...

Not least among the undesirable results of the Government's recent announcement of the proposed nationalisation of an undefined part of the iron and steel industry was the fact...

The Senate and the Loan

There can be little patience in this country with the hesitations of the United States Senate over the proposed loan to Britain. A strong body of British opinion has always...

P ERSONS in this country who take pleasure in pessimism (a by no means inconsiderable class) can find abundance to satisfy them as they survey the foreign field today. Quite...

While a U.N.O. committee; and a great many other people

in different places, are arguing about the political regime in Spain a move is in progress, I am very glad to hear, to spread some knowledge of Spanish culture in Britain, as...

If the audience which listened with admiration to Mr. R.

A. Butler's Presidential address to the Modern Language Association last Saturday had known that in his article in the Observer the next day he would be referring to " the...

corrigenda ; the prick of conscience is there in either case. (r) The Oxford Group specialises in moral re-armament, not moral disarmament. (Not very much prick.) (2) Lay...

T HE Prime Minister's statement on Wednesday on methods of consultation of the Dominions is more important than seemed to be generally appreciated—or appreciated even by the...

The neatest and aptest wit in the House of Commons

is un- questionably Mr. Oliver Stanley. The all-night sitting on Tuesday was brightened by one evidence of that. The Solicitor-General, Sir Frank Soskice, had been insisting...

Mr. Churchill announced on Monday that he had been told

by his doctor that he must go slow. On Tuesday he proceeded to go slow. Acknowledging the presentation of the freedom of the City of Westminster, he delivered a general...

By EDWARD ATIYAH T HE Anglo-American Committee's Report on Palestine has already taken its place in Arab eyes side by side with the Sykes-Picot Agreement, the Balfour...

By MRS. EDGAR DUGDALE O PINIONS will differ as to how far the recommendations of the Anglo-American Committee of Enquiry conta;r1 the elements of a satisfactory settlement of...

TOWARDS THE QUIET MIND

By W. RUSSELL BRAIN A HUNDRED and fifty years ago, on May II, 1796, a group of members of the Society of Friends opened The Retreat at York as a hospital for those Friends who...

thin Bible paper and weighing under one ounce, can now be sent by air mail to civilians any- where in Europe (except Germany) for £2 7s. 6d. per annum, or Li 3s. 9d. for six...

Out of the wintry heart You come like Persephone From the roots of the apple tree That grew in Paradise ; In Time and yet apart, As a wild water flower Stands in the running...

By SIR SYDNEY COCKERELL C HARLES HARRY ST. JOHN HORNBY, whose Ashendene 'Press shares the renown of the Kelmscott and Doves Presses all the world over, died at his home in...

By HAROLD NICOLSON H AVING just returned from Nuremberg, I am more convinced than ever that if one wishes to grasp the reality of events, it is essential to understand, not...

Frieda." At the Westminster.—Ballets Negres. At the Twentieth Century. THERE have been few recent plays as contemporary as Frieda, which is the story of an English airman who...

"Life with Baby." At the Empire. THE latest March of Time release has a title as hackneyed and un- promising as the film itself is novel and stimulating. Life with Baby is not...

The Royal Academy. IT is by no means easy to write a different notice about the same exhibition every year, and this year's Academy is in no discernible way different from the...

THE FATE OF THE SOUTHERN TYROL "

Snt,—In view of the reported trend of the discussions by the four Foreign Ministers on thz Southern Tyrol question, I hope you will give space for further expressions of opinion...

Sin,—The Palestine Commission's report refers to " the fiery spirit of nationalism so marked in Jewish schools." During my service with the Royal Air Force in Palestine, from...

Sin,—The decision of the Foreign Ministers' Conference in Paris to

refuse the return of South Tyrol to Austria perpetuates the worst and least excusable violation of the principle of self-determination sanctioned by the Peace Treaties at the...

Sm,—In the death of Edward Thompson, India has lost a true and sincere friend whose whole life was given to work and writing for the cause of Indian freedom. Janus writes truly...

Six,—There are two points which require an answer in Mr. Neil Mac- Pherson's letter in your issue of April 26th. Firstly, vested interests. The application of Liberal principles...

SIR,—May I add something to the valuable contribution of "H. T. S." in your issue of the 3rd instant? There are undoubtedly many abuses of the ground-rent system, when operated...

Silt,—Mr. P. E. Roberts, like Mr. Hugh Daltortp,ueats the maximum rate of death duties as 75 per cent. It is in fact a good deal more. There are expenses of administration, and...

Sis,—In the letter on "Prospects in Greece," published in your issue of May 3rd, your correspondent, Mr. Pat Sloan, makes the statement that "notorious Fascists and...

Sta,—While thanking you for taking notice of my book, may I point out that your review contains two statements that are obviously incorrect? Your reviewer says that what I tell...

SIR,—In view of the importance which you attribute to the problem of the Control of Atomic Energy, I .should be glad if you would find space for a correction to the note in your...

May Frosts The apple blossom is a glory to behold

; but whether this is a prelude to a glory of fruit will depend chiefly on the weather throughout the first fortnight of May. Many fruit-growers hold that if the bloom is not...

Sra,-f--In view of the parlous state of the food situation

in Europe, and the efforts being made by all the Dominions in this direction, it is a• little difficult to understand why dehydration plants in New Zealand; which formerly...

Premonitions Two strange examples have been brought to me of

dogs crying in obvious grief on the eve of the death of their master, and as explanation a "sixth sense " has been involved. Such an explanation carries us no further ; but it...

EVERY person who is interested in the Broads should feel

a generous sympathy towards the latest scheme put forward in co-operation by the National Truk and the Norfolk Naturalists' Trust. This Trust, which preserves a dozen or so...

Snt,—It is odd that one should find divergent views resulting

from the same practical test. Dorothy Buxton claims that from personal experience mere hunger does not help clear thinking. I beg to state that the reverse is the truth. I,...

SIR,—I honour greatly the achievements of General Booth, but. Com- missioner Lamb is not the first Salvationist to underestimate the value of what the Salvation Army got, and...

In considering the value of plants and shrubs, the length of the flower- ing period is often of forgotten importance. In our -order of merit 1 think Laurustinus would come first...

THERE is now a remarkable body of Chinese verse rendered into English. The first book of renderings (that I know of) is the " Chinese Shi King," translated by William Jennings....

A Charter for Health. By a Committee of the British Medical Association. (George Allen and Unwin. 6s.) 'nits present age of planning is making all previous ages appear times of...

The Big Three. By David J. Dallin. (Allen and Unwin. 8s. 6d.) THIS is an extremely good book. It should be read by everyone who is interested in the relations between states as...

Twelve Stories. By Steen Steensen Blicher. Translated from the Danish by Hanna Astrup Larsen. With an introduction by Sigrid Undset. (Princeton University Press and Geoffrey...

Russia in the East

Soviet Far Eastern Policy, 1931-1945. By Harriet L. Moore (Princeton University Press and Geoffrey Cumberlege. 16s.) THERE is nothing much to say about this book for the simple...

di THE SPECTATOR " CROSSWORD No. 374 [A Book Token

for one guinea will be awarded to the sender of the first correct solution of this week's crossword to be opened after noon on Tuesday week, May 21St. Envelopes must be received...

Houses : Permanence and Prefabrication. By Hugh Anthony (Pleiades Books, Ltd. 6s.) As an introduction for the general reader, this book could not easily be bettered. The author...

By CUSTOS IF anybody still• doubts the underlying strength of the stock markets, he can scarcely fail to be impressed by the performance of the past week. From Paris and...