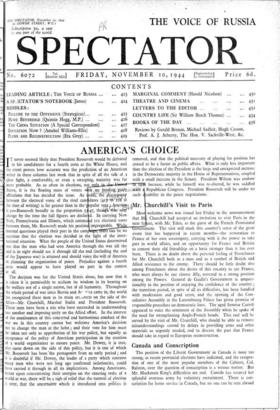 I T never seemed likely that President Roosevelt would be defeated in his candidature for a fourth term at the White House, and the event proves how accurate was the prediction...

hurchill's Visit to Paris Most welcome news was issued last Friday in the announcement that M . Churchill had accepted an invitation to visit Paris in the near fu re, with Mr....

The position of the Liberal Government . in Canada is none too strong, as recent provincial elections have indicated, and the resigna- tion of one of the most popular members of...

F OR a variety of reasons I do not and cannot

use this column as a vehicle for financial appeals. I think I have only made one exception to that rule, and that was in favour of a Malta fund some two or three years ago. That...

My quotation of Dr. G. M. Trevelyan's reference to a

certain work which he regards as " the best record of a nation's past that any civilisation has produced;' has not evoked many speculations about the identity of the work so...

. A signal illustration of how not to talk of

Americans was provided by Brigadier-General Critchley, Director-General of British Over- seas Airways, at a discussion arranged by the Royal Aeronautical Society last Saturday....

of 1942 provided not only for alliance in war but

for " mutual assistance thereafter," and that was specifically interpreted as committing the two countries to collaborating not only for security but for economic prosperity in...

except as a volunteer. So far the volunteers have sufficed

for all needs, but now the need of filling up gaps caused by casualties is acute, and Col. Ralston, on returning from a visit to the European fronts, declared that only...

It has been said that the means for what it

is perhaps sufficient to call restraining Germany must be always ready. What that means is defined by Marshal Stalin in language completely consistent with the decisions taken...

more true than of Britain and Russia. The necessary close

associa- tion will not always be easy to preserve. Our two countries have had very different histories, and their political ideas are far from

the authentic voice of Russia, and there are many reasons

why last Monday's speech is of special note. It was delivered on the twenty-seventh anniversary of the Russian revolution, a revolu- tion which through the last decade and more...

fact that Lord Cecil should have declared on Tuesday that

if the strong measures urged by M. Litvinov in 1938 in the matter of Japanese aggression had been adopted the whole tragedy in which the world has since been plunged might have...

But German militarism has still to be shattered, and there

PRELUDE TO THE OFFENSIVE

By STRATEGICUS I T seems almost an insult to describe the campaign which has cleared North Brabant up to the Maas and the Hollandische Diep as a prelude. The battles which...

By QUINTIN HOGG, M.P. uTT is orthodox Treasury dogma steadfastly held," said Mr. X Winston Churchill in introducing the Budget in 1929, " that whatever might be the political...

By A SPECIAL CORRESPONDENT T HOUGH General Stilwell's recall from China has caused some- thing of a shock, it springs naturally from a situation about which there has never...

By AMABEL WILLIAMS-ELLIS T WO reasons why the better education for the nation's children promised in the new Act will almost miss the whole present school generation were given...

I MAY not love the sun too much, or the grey hills and the sky. For I am afraid lest my love for them Should break my heart when I die. Who knows if the sun will rise...

By HAROLD NICOLSON rr the age of reason, and are no longer swayed by those extremes of affection or dislike which disturbed our young and middle years. Our hatred of the...

I am not aware, moreover, that any of my subsequent visits to Buda-Pesth were accompanied by circumstances which should perpetuate irrational distaste. I admit that I never felt...

It is natural and right that we should experience a

sense of horror when large human cities are destroyed. The fact that Buda-Pesth and Berlin are ugly cities should not make any marked difference. There are many rational reasons...

My psycho-analyst, I fear, would remain unimpressed by all these explanations. He would shake his head patiently, deny that such were the true causes of my antipathy, and begin...

Were I either leisured or enormously rich I might submit

to some psycho-analyst the complex of antipathies which tangle themselves around my concept of Hungary. I should seek to convince this examiner that my dislike of everything...

THE THEATRE 4 , Private Lives." At the Apollo.—" Too True

to be Good." At the Lyric, Hammersmith.—Anglo-Russian " Merry - Go - Round." At the Adelphi. THERE comes a time when it is apparent that some social explosive force is needed...

THE CINEMA "Adventures in Bukhara." At the Tatler. " The

Climax." At the Odeon.—" Spanish Earth." At the Academy. — " Ku Kan." At the London Pavilion. Adventures in Bukhara is a film depending as Much for its effect on atmosphere as...

Sin,—Mr. Churchill's last speech gives rise to a number of reflections generally and for us Poles in particular. Chancellor Hitler in 1938-39 urged Poland to join Germany in an...

EAST AFRICANS Sin,—I read with -great satisfaction Captain Broadbent's letter on Octo- ber 27th. The problem of the R.W.A.A.F. askari is matched by that of his East Afritan...

A GERMAN ON GERMANS

Stn,—I am afraid that this letter must seem very out of date, as I refer to a correspondence on the subject of the German people in the July issues of The Spectator. But we, in...

SIR, —Might I avail myself of your columns to appeal to the two main parties of the Coalition to try and reach an accord on Foreign Policy before the General Election? Under the...

a very important point when he says that the health of the community depends far more on its environment—and, I would add, on the quality of its food—than on bottles of medicine...

Sta,—Your correspondent, Mr. T. A. Clarke, drew attention to the dis- figurement of railway stations by advertisements, thus defacing whatever architectural merit they...

SIR, —I have only today read the correspondence on India's population. Lord Munster said recently " that the population of India is increasing by five million every year." Your...

SIR, —In your issue of Octhber 27th under "News of the Week "— "Home Truths for Lancashire "—you state, " We are hampered by a conservative tradition, by insufficient...

Sta,—The criticism by Mr. St. John Ervine of George McManus's Life of Eamon De Valera which appeared in your issue of October 28th appears to derive its theme from the writer's...

THE day on which was signed the " weapon-still-stand " of the last war is often an armistice between autumn and winter. It is on record that in the midst of the war the...

SIR,—I am glad to see that Edgar Anstey has called attention to the importance of the work of the Film Societies and of the Scientific Film Societies. They are both movements...

THE DECLINE OF NONCONFORMITY

SIR,—In your review of Mr. E. A. Payne's book "The Free Church Tradition in the Life of England " some reasons are given for the decline of Nonconformity. The Passive Resistance...

November Bouquets Whatever may happen on St. Martin's day, November's

opening was floriferous beyond the normal, though often enough it is possible to pick bouquets of three score and more of different flowers. Belladonna lilies were in splendid...

Sta,—I read with great interest Sylvain Mayer's article " Sarah Bernhardt " in The Spectator of October 27th. This informing and instructing article is really a work of art. May...

SIR,—In the article on Sarah Bernhardt in The Spectator of

last week there is recorded a remarkable incident that occurred in a Glasgow theatre where the great tragedienne was appearing in La Dame Aux Camilias. It is said that a man...

In My Garden The broad beans are just above the

soil and will not need the protectio which must be extended 'to the young lettuces. A constant supply these can be maintained if the seed is sown in warm soil and if th plants...

A Migrant Weed A belated query and criticism reaches me

about the willow-herb that has this last season, and even today, decorated blitzed areas in London and other towns. What should the flower be called, rosebay, or willow herb or...

A True Psalm An ardent naturalist recently filled his short

leave in Palestine in paying a visit to the Cedars of Lebanon and wrote home to say that the 104th psalm is quite right: the birds do make their nest there. The whole place was...

Visit to Spain An Interlude in Spain. By Charles d'Ydewalle. (Macmillan. 8s. 6d.) Tins book is the first of what is likely to become a long and exciting series : it is an...

Images from the Arab World. By Herbert 'Howarth and Ibrahim Shukrallah. (The Pilot Press. 9s. 6d.) THE sub-title of this book describes it as Fragments of Arab literature...

Architecture Arising. By Howard Robertson.—Our Building Inheritance. By W. H. Godfrey. (Faber and Faber. 10s. 6d. each.) ARCHITECTURE is everybody's business. It is the one art...

Tins is a true adventure story in the form of the author's lett to his publisher, because although he is a journalist this se' declared literary naïf could not trust himself to...

Third Class to Dunkirk. By Peter Hadley. (Hollis and Carter. 7s. U.) MR. HADLEY was a subaltern in what, from internal evidence, seems to have been a Territorial battalion of...

BEST sellers are notoriously tricky things to spot in advance. Publishers' readers have been known to turn them down and to have spent the rest of their lives regretting it ;...

SOLUTION TO CROSSWORD No. 294 SOLUTION ON NOVEMBER 24th The

one guinea taut be awarded to the sender of she first correct lotion of this week's crossword to be opened after noon on Tuesday week, arember 21st. Envelopes should be received...

How to Write. By Stephen Leacock. (The Bodley Head. 8s.

6d.) MANY authors, including the symbolist Mallarme, have written eloquently about that dread of the blank page, which prevents their beginning to write, an inhibition not yet...

Books. 9d.) PERHAPS the most welcome and unusual contribution to this number is Veronica Wedgwood's " Poets and Politics in Baroque England." Many people delight in Davenant's...

By CUSTOS HOPE deferred has so sickened the hearts of British investors in Argentine railways that recent news of important concessions in tariffs and exchange rates has...