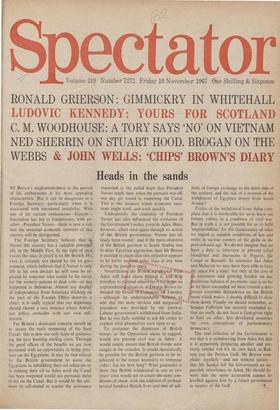 Heads in the sands

Mr .Brown's singlemindedness in the pursuit of his enthusiasms is his most appealing characteristic. But it can be dangerous in a Foreign Secretary, particularly when it is...

Every week has its quota of bloody violence; about accidents people are less blasé. An Iberia Airlines Caravelle crashed in Sussex, killing thirty-seven passengers; the...

Mr Harold Wilson bids fair to make his mark - in the history books as the most unsticcessful Prune Minister of modern times. This is not simply a matter of judgment: it is also...

POLITICAL COMMENTARY AUBERON WAUGH That Labour backbenchers should be more in- terested in a great economic affairs debate than their Conservative opposite numbers is only to...

If Arabs had wings

MIDDLE EAST LAURENCE MARTIN By the end of the June war Israel had virtually destroyed the Arabs' powers of resistance and stopped only where it suited her for political and...

A Tory says No

VIETNAM C. M. WOODHOUSE Monty Woodhouse, MP for Oxford until 1966, was a junior minister in the Macmillan and Douglas-Home administrations. There are two quite distinct...

AMERICA MURRAY KEMPTON Boston, Mass.—'A feeling of having no choice,' Miss Mary McCarthy has noticed, 'is becoming more and more widespread in American life.' We have become,...

The curse of gimmickry

GOVERNMENT RONALD GRIERSON Ronald Grierson resigned as chief executive of the IRC a fortnight ago. This critical appraisal of the Government's new policy to- wards industry is...

PERSONAL COLUMN LUDOVIC KENNEDY To take the personal side first. I came back to live here eighteen months ago because this is my mother's and father's country, where I was...

From the 'Spectator', 9 November, I867—The accounts of the battle of Monte Rotondo, or Men- tana, as the French call it, from a village nearer to Rome, are conflicting; but...

THE PRESS DONALD McLACHLAN is it significant that commuters can be seen extracting from their copies of The Times its Business Section and leaving it behind when they leave...

SCIENCE PETER J. SMITH The earth is slowly getting warmer, and one of the most significant results of this pro- cess is the gradual melting of the Antarctic ice cap. If this...

. . the reason why newspaper managements have been able to have their backs against the wall without reading the writing on it.' (Clive Irving, The Times, 4 November.) They...

THE LAW R. A. CLINE The Street Report on anti-discrimination legis- lation has rightly received respectful applause from that segment of public opinion which is professionally...

CONSUMING INTEREST LESLIE ADRIAN Those whom business or pleasure takes down the Kensington High Street have been wonder- ing for some time what was going on near the Royal...

Books to the wall

TABLE TALK PENIS BROGAN Showing that although I am no longer a pro- fessor. I still am a don, most of my indignation and interest this week have been due to the quarrel over...

The trouble with aunt Bo BOOKS

DENIS BROGAN Quite recently, I mentioned to a great friend of mine, a devoted if no longer a devout member of the Labour party, that the Webbs had been buried in Westminster...

HARRY G. JOHNSON The New Industrial State J. K. Galbraith (Hamish Hamilton 42s) 'The imperatives of technology and organisa- tion, not the images of ideology, are what...

NED SHERRIN Any book about television which devotes more space to TW3 than to any other single pro- gramme is obviously soundly based; and although Stuart Hood had no active...

GEORGE HUTCHINSON By this book, it may be thought, the President of Pakistan has done himself less than justice, for both in character and in outlook he is, I believe, more...

The Politics of the European Communist

Inside the apparat S. E. FINER faut une volontd unie' wrote Robespierre in his camel: and in 1921 Lenin echoed him in proclaiming 'the opposition's time has run out . . . we...

A Second Hand Life Charles Jackson (W. H. Allen 30s). Nineteen years since The Lost Weekend, Jackson's authoritative portrait of an alcoholic, but this routine study of a...

STUART HOOD It was good to see television celebrating a real event—the Russian Revolution—and not some spurious landmark in the history of conimunica- tions like Twenty Years...

Up a crumb tree

OPERA • CHARLES 'REID There was a page of prelude before the curtain went up on Richard Rodney Bennett's new opera at Sadler's Wells. Soft, high fifths and fourths dipped and...

CHRISTOPHER FILDES In a flurry of flying directors, whirling around the country in search of votes, the great struggle for Associated Electrical Industries is drawing to its...

NICHOLAS DAVENPORT Perhaps I had already been conditioned by the hilarious cartoon in the Evening Standard of the Queen, reading the speech from the throne, with the caption :...

PORTFOLIO JOHN BULL No new stock this week, but a second look at two already in the portfolio. In the insurance world, things have been moving to my advan- tage: but in the...

Bankers of the world, unite!

BUSINESS VIEWPOINT WALTER SALOMON Walter H. Salomon is chairman of Rea Brothers, the City merchant bank, and of Canal- Randolph Corporation. Now that the dust has settled, I...

CUSTOS Equity shares are trying to accustom them- selves to the rarefied atmosphere up above the 400 mark on the Financial Times index. Plenty of takeovers and plenty more...

Sir: If John Ashe feels- that Tories are disposed towards selectivity in that they oppose the waste of public resources, excessive taxation and the erosion of the instinct to...

Sir: In reply to Mr Graham Hutton (Letters, 3 November) I can only say that since I am re- motely a Nixon which is a sept of the Macleans I cannot be expected to accept my old...

Sir: In his sympathetic review (27 October) of A New Canon of English Poetry, edited by Martin Seymour-Smith and me, Anthony Bur- gess suggests that our representation of the...

Why all this fuss about libraries?

Sir: Mr Burgess (3 November) and J. Caesar would not be alone in their book burners' club. The philosopher Hume once wrote: 'Science, then, must limit itself strictly to...

Extinct volcano Sir: Arnold Beichman says in his review of

Jack Newfield's book, A Prophetic Minority : The American New Left (3 November), that 'there is no New Left in America except for a lot of rhetoricians who write about the New...

Sir: Mr Christopher Hollis's interesting and enter- taining note on Lord Attlee's personal character (13 October), prompts me to venture to mention a slight anecdote about the...

AFTERTHOUGHT JOHN WELLS During the glittering 'sixties there was perhaps no figure better known or better loved in London society than 'Chips' Brown, the ebullient Foreign...

Sir: John Higgins (27 October) is understandably critical of the performance of the 'non-play,' Tom Paine, at the Vaudeville Theatre, but he seems to have swallowed a major part...

Sir: While I was happy to see your very favourable review of my book The Wobblies I was sorry to see that it was credited to Patrick Kershaw and not to

No. 474: Sextet Competitors are invited to compose a six-line poem, or stanza of a poem, on any one of the subjects given below, using three of the follow- ing four pairs of...