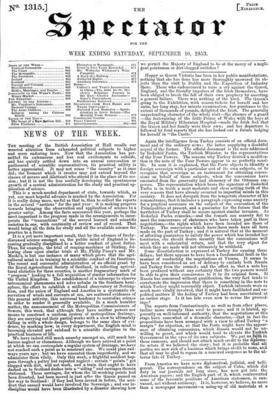 Happy as Queen Victoria has been in her public manifestations,

nothing that she has done has more thoroughly answered its ob- jects than the visit to Dublin and the Exposition of Industry there. Those who endeavoured to raise a cry against...

THE meeting of the British Association at Hull recalls our wearied attention from exhausted political subjects to higher and more enduring laws. Now that the Association has...

From America we have news diplomatical, judicial, and belli- gerent.

The correspondence on the subject of Cuba, which did duty in our journals not long since, has now got into the American papers ; and the English part of it, which controverted...

Again the intelligence from Turkey consists of an official docu-

ment and of the ordinary news ; the latter supplying a doubtful sequel of the former. The official document is the note addressed by Redschid Pasha, the Turkish Minister, to the...

At a General Court of the Metropolitan Commissioners of Sewers,' on Tuesday, Mr. Richard Jebb made a statement to show what had been done during the last twelve months. He...

Tna3 Queen left Dublin on Saturday, and is now once more in her High- land retreat at Balmoral Her Majesty went on board the Victoria and Albert yacht about half- past five on...

The annual meeting of the British Association for the Advancement of Science is held this year at Hull. The proceedings began on Wednesday. The President of the past year,...

The last days of the Queen's visit were well filled with incidents; her Majesty showing that activity which has become proverbial. On Thurs- day she visited the Exhibition...

FRANce.—A remarkable movement is noticed in the Department of the Herault this week. The President of its Council-General is the Free-trader Michel Chevalier; and the Council...

The election of a Representative Peer, to fill the vacancy occasioned by the death of the late Earl of &afield, took place at Holyrood Palace on Wednesday. Sixteen Peers were...

Lord John Russell, called to London by a special message, arrived from Edinburgh on Friday night. On Saturday he had a long interview with Lord Aberdeen, Lord Clarendon, and...

SAT1731DAY. A telegraphic despatch from Vienna, of Monday's date, states that the Russian reply to the despatch containing the modifications desired by the Porte is expected at...

Reports of the cholera, both at home and abroad, still

reach us. It was stated yesterday in the daily papers, that more than twenty cases of Asiatic cholera had occurred at Newcastle, all terminating fatally : there is some reason,...

There is nothing in the commencement of the Drury Lane season to indicate an elevation of the establishment. Mr. G. V. Brooke, intended by nature for a good tragedian as far as...

, • the Emperor and Empress of the French were

to leave Dieppe today for Paris ; but it is understood that the profuse preparations made at Boulogne for their reception will not be in vain. The day named for the Imperial...

The annual dinner of the East Suffolk Agricultural Association, at

Ips- wich on Thursday, was attended by the President, Lard Stradbrooke, Lord St. Leonardo, Sir Edward Gooch, and Sir Fitzroy Kelly. The speeches of the President and the late...

STOCK EXCHANGE, FIUDIT APIEMEGON. The present week has failed to produce any new feature in monetary affaira. With the exception of a dulness in the Corn-market, the various...

A friend who views the world of action "through the

loopholes of re- treat" gives us the impressions made upon an impartial mind by the reading of the latest newspapers on the Turkish question. "The Four Powers have erred in...

Le Nabob, the new comic opera by MM. Scribe and St. Georges, with-, music by Halevy, has proved successful, chiefly, it seems, on mita:rant of the ingenuity of its plot The "...

RELIGION AMONG THE CHINESE REBELS.

THS TRIMEIIIICAL CLASSIC." A religious Pamphlet, quoted by Mr. Oxenford in his Translation of the History of the Insurrection in China. The great God Made heaven and earth;...

No. 1 Adam Street, Adelphi, 5th September 1853. fin—In examining these curious specimens of blighted humanity, I find them to resemble in their facial expression the general...

, _ ,Leeds, 6th September 1853. Sin—In your remarks on this subject, page 856 of last Saturday's Spec- tator, I notice some observations on a suggestion of Mr. William Entwisle,...

THE SCOPE OF A NEW RFFORM Ir appears, by two Parliamentary returns recently published, that the boroughs and cities possessing the privilege of Parliamentary representation in...

BARNSTAPLE is a model borough. It illustrated at the last elec- tion all the characteristics of England : Lord Ebrington illus- trated the purity ; Mr. William Harris...

actual position of the dispute between Turkey and Russia, as conducted by the mediating Powers, passes comprehension. We find Turkey declining to acquiesce in what is...

FRANCE and some other countries have taken measures to secure large supplies of bread, corn, and similar articles of food, in the event of the scarcity which is apprehended ;...

Wine-duties appears to have settled Westifin as to the expediency of reducing the impost. The evidence satisfactorily shows that the duty checks consumption; that it protects...

A STORY OF A RAILWAY.

Tan romance of real life in our day, even in "the best-regulated society," appears to be almost as lawless as it was in the melodra- matic clays of the middle ages, wanting only...

Tire late Poet Laureate thought fit, when in 1837 he published a collected edition of his poetical works, to make very material alter- ations in his juvenile poem of Joan of...

TIIEBE is one branch of the service to be rendered by insurance- offices which has as yet been but partially tried, although the ad- vantage of the plan speaks for itself. It is...

CALLERY'S AND YVAN'S INSURRECTION IN CHINA' THE French compilers of this history of the rebellion in China are both practically acquainted with the language and the people of...

THE ABBE DE ST. MICHON'S RELIGIOUS JOURNEY IN THE EAST. *

LIE author of this vivacious volume of Oriental travel was at- tached as botanist to De Saulcy's scientific expedition to the Holy Land : his object, however, was far higher...

Tins fiction belongs to the class of what are called art-novels, its form being that of a musician's autobiography. The hero of the story, however, is less Charles Auchester the...

BOYER'S PANTHROPREON. * A wonix of eaters is no longer to

pine in want of the history and science of its most universal and necessary, not to say its noblest faculty. "Let me not burst in ignorance" has long been the inarticulate cry...

NATIONAL FOOD STATISTICS. In spite of Colonel SibthOrp, who contends that the Government has no more to do with the quantity of land which he has devoted to the cultiva- tion...