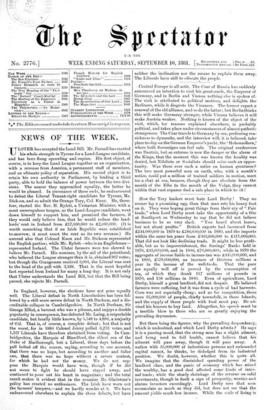 How the Tory leaders must hate Lord Derby ! They

no sooner lay a promising egg, than that man sets his heavy foot on it. They were hoping great things from their cry of " Fair trade," when Lord Derby must take the opportunity...

But these being the figures, why the prevailing despondency, which

is undoubted, and which Lord Derby admits P He says it is a passing mood, that the strong man has a slight ailment, and being used to full health, cannot believe that his...

In England, however, the elections have not gone equally well.

*** The _Editors cannot undertake to return Manuscript in any

TT LSTER has accepted the Land Bill. Mr. Parnell has exerted his whole strength in Tyrone for a Land-League candidate, and has been flung sprawling and supine. His first object,...

Central Europe is all astir. The Czar of Russia has

suddenly announced an intention to visit his great-uncle, the Emperor of Germany, and in Berlin and Vienna nothing else is spoken of. The visit is attributed to political...

A most unfortunate affair occurred at Limerick on Sunday. The

townspeople hissed and stoned some soldiers who were going by train to Cahir, and on their departure threatened a private of the Scots Greys, who happened to be on the platform....

The second ballotages in France were taken on Sunday, and

the total result was most favourable to the Republican Party. It has returned more than four-fifths of the whole Chamber of Deputies. Of the entire 557 Deputies, 43 only are...

The French are obviously preparing for a grand campaign in

North Africa. The Governor-General of Algeria has gone back, negotiations have been opened with Morocco, and rein- forcements are crossing the sea almost daily, both for Algeria...

The Marquis of Waterford is the first great Irish landlord

who has acted upon the provisions of the Land Act. He did not like the Bill, which he criticised in the House, and he does not like it now ; but he accepts it, since it is law,...

President Garfield still lives, and there is still hope. On

Tuesday, the physicians deciding that the White House was hot and unhealthy, he was conveyed from Washington by railway t4 Long Branch, a watering-place in New Jersey, where he...

Sir Stafford Northcote made an able, but we cannot but

say most disingenuous second speech, at Sheffield, on Friday week, in which he stated that the Liberal Government had taken office with many advantages,—a great majority, an...

M. Gambetta addressed the people of France at Neubourg on

Sunday, in a speech which, but for some hinted menaces to the Clericals, and a remark about the 6puration of the magistracy, was decidedly Conservative. He declared that he was...

The Times of Friday contained a letter which, if Mahom-

medans read English or understood hygiene, would have a circulation of millions. The centre of the Mahommedan world is Mecca, and the centre of Mecca is the well Zemzem, the...

The reports from Egypt are strange. It is stated that

the European officials are alarmed at the mutinous condition of the Army, and that the French and British Governments have agreed, should it be necessary, that the country...

The Court-martial on the loss of the ` Doterel '

ended on Saturday, in what Coroners call " an open verdict." The Court find that they do not know how the explosion was caused. That is their meaning, at least, though they say...

the Member for Oxford, to succeed Sir G. Jessel as a Judge of First Instance in the Chancery Division, the Master of the Rolls baying been permanently transferred by the...

Dr. Siemens had previously read-a paper to the Association on

the forcing of plants by electricity. He placed a lamp of 4,000 candle-power inside a glass house of 2,318 cubic-feet capa- city, and suspended another like it over some sunk...

On Monday, while the Mechanical Section of the British Association

were discussing the means of using the electric light in coal mines, Mr. Swan, inventor of the " Swan lamp," made a remarkable statement. He produced an electric lamp of...

The end of the present struggle in Afghanistan appears to

be approaching. The Ameer, with his army, has reached Khelat-i-Ghilzai, and Ayoub Khan is encamped about seventy miles off. He is evidently reluctant to make the decisive...

THE ENGLISH BYE-ELECTIONS. I T seems to us foolish to endeavour to explain away the recent defeats at the English Bye-elections. The result of a bye-election is, as we said...

M R. PARNELL has formally declared war against the Liberal Party, both in Ireland and England. At the {general Election last year, there can be little doubt that in the English...

in politics have ever been given to European statesmen than Prince Bismarck's surrender of the May Laws, announced to the world by the appointment of Dr. Korum to the See of...

THE MEANING OF THE " FAIR-TRADE " CRY.

T,UrE thought, and said, two months ago, that we hoped • V to escape a Protectionist discussion, as the Tory leaders would be wiser than the Tory talkers, but the hope has...

TR E finding of the 'Doterel' Court-martial is hypothetical in substance, though categorical in form. The Court assigns a cause and suggests an occasion for the explosion by...

ELECTRICITY AS A FACTOR IN HAPPINESS.

p ERHAPS the most marked feature of the hour, outside politics, is the anxious and hopeful attention paid to applications of Electricity. Investigation and experiment have been...

THE MEETING OF THE EMPERORS.

T HERE is nothing ridiculous in the commotion excited in Central Europe, and indeed in all diplomatic circles, by the meeting of the Emperors at Dantzic. Such meetings have...

O F course, the old landmarks of popular culture and amuse- ment alter from time to time, like other things ; and if report speaks truly, that very old friend the Royal...

RITUALISTIC MARTYRS. [TO THE EDITOR OP THE " SPECTATOR."] SIR,—Yon ask (in a note to Mr. Collins's letter), why could not the Bishop of Manchester have done what the Primate...

[To THE EDITOR OF THE " SPECTATOR." _I Sre,—In your review of Miss Brook's " French History for English Children," in the Spectator of the 3rd inst., you say that the authoress...

[To TER EDITOR OP THE " BEECTATOR."] SIR, —I hope you will kindly allow me, while expressing grati- tude for the generous and sympathetic treatment which " Links and Clues "...

MISS THACKERAY ON MADAME DE SEVIGNE.* THERE are some books which, in spite of their charm, perhaps: because of the peculiar quality of it, are particularly difficult to•...

THE RITUALISTS AID THE LAW.*

THIS handsome volume contains the illustrated history of a church which dates from the time of Edward the Confessor, and which is associated with some of the most striking...

PEOPLE who are well off themselves generally incline to the opinion that the world and its concerns are, on the whole, very well arranged, and that there must be something...

THE RESURRECTION OF OUR LORD.* IF the Resurrection of Jesus

Christ be a fact, it is manifestly of transcendent importance. Its bearings on all theories of the world, of man, and of God, as also on all problems of human life, duty, and...

THE Nineteenth Century is, on the whole, the most vivid of the- Magazines for September. Mr. F. Harrison, on "The Dead- lock in the Commons," is as eloquent as usual, and more...

SCHOOL BOOKS. In school books for teaching English History, we notice with plea- sure that the National Society have given the task of preparing their Reading-books on that...

The Story of Philosophy. By Aston Leigh. (Triibner and Co.)—

It is impossible to avoid the conviction that Mr. Aston Leigh does not possess that thorough acquaintance with his subject which alone can entitle a man to deal with it in...

Gill, Dublin.)—The author of this volume is an enthusiast on the subject of St. Patrick, and, indeed, on early Irish ecclesiastical history generally. It will be news, we...

On the whole, we can safely recommend this handbook to inex- perienced amateur actors. It gives most of the information they require on such matters as " make up," rehearsal,...