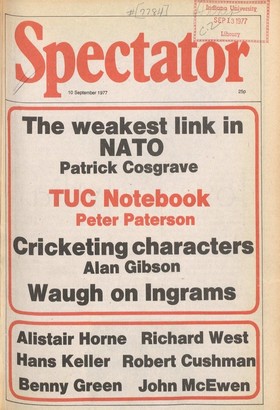 The British Foreign Secretary, Dr David Owen, and the American Ambassador to the UN, the Rev Andrew Young, have concluded a visit to Africa during which they presented an AngI9...

Ward politics John Grigg When the Scarman 'court of inquiry' was set up, responsible politicians on all sides hoped that it would lead to a settlement. Unfortunately it has...

The momentary expulsion of the mighty Transport and General Workers Union from the TUC on Monday provided one of those uncovenanted thrills that stirs the anarchy of us all. The...

Meditations in church Auberon Waugh At Gruissan, on the Mediterranean coast nine miles south of Narbonne, they have built a workers' paradise. It stands in the beautiful Aude...

Patrick Cosg rave An important paper is about to go into circulation in Washington which will give rise to considerable concern about the future strategic posture of the Unites...

Richard West Johannesburg My journey to Salisbury, Rhodesia began at Victoria Station which does not of course mean that I planned to get there by way of Cecil Rhodes's Cape to...

Xan Smiley Salisbury The fear of a wave of urban bombings following the blast that killed eight Blacks and three Whites in Woolworths a few weeks ago has it seems imposed new...

Brian McConnell A criminologist recently gave a lecture in the United States on Victorian murders. When he had finished, an eager student Of crime in the audience asked: 'Was...

Towards the psychopathology mental health

Hans Keller Ever since 1961, the year of the publication of Thomas Szasz's The Myth of Mental Illness, the professional world — psychiatrists, anti-psychiatric neurologists,...

Ironic surpluses Nicholas Davenport The type of humour which appeals to me is the ironic and as I move in the cynical financial world I often find much to raise a laugh. One...

Sir: Reporting on cancer treatment with laetrile, a food-derivative which though admittedly harmless in applied dosage has not yet been legally sanctioned throughout the USA, Mr...

Sir: In his article 'The Nemesis of Free Trade' (27 August) Lord Kaldor makes no mention of the consequences of the adoption of protectionist policies of which there is abundant...

Sir: John Grigg is wrong in his sweeping and bitter article on Presley (27 August). Myths of all kinds are omni-present and invariably gross and should be treated with...

Voice of the siren

Sir; The appearance of Banquo's ghost before Macbeth could not have aroused greater astonishment than I felt on reading John Grigg's article (3 September). Extraordinary it was,...

Sir: Alfred Sherman is correct to point out in 'Who gains from tourism?' (27 August) that tourism can impose social costs on tourist areas. However when he states that taxes '...

Auberon Waugh God's Apology: A chronicle of three friends Richard ingrams (Deutsch £5.50) There is the difficulty in reading a friend's book that one hears his voice on every...

Juliet Mitchell Marie Stapes Ruth Hall (Deutsch £5.95) The name of Marie Stopes is almost a synonym for contraception. She, herself, certainly considered that she had brought...

Richard West The Honourable Schoolboy John Le Carrel (Hodder and Stoughton £4,95) When Ian Fleming's novel You Only Liverwice appeared in 1964 there were strikingly different...

Peter Ackroyd Speed Boat Renate Adler (Hamlet) Hamilton 23.95) This is the first time you will have heard of it, but there is a new kind of fiction which has nothing to do with...

Benny Green A Dictionary of Catch Phrases Eric Partridge (Routiedge and Kegan Paul E7.95) That Eric Partridge is, in his own way, a great man, must by now be a truism; anyone...

Supper club singers Robert Cushman Mabel Mercer sings with an English accent, standard English at that. Since she wag born in Burton-on-Trent this may not-Seem surprising but...

Legendary Ted Whitehead Dean (London Casino) Shoot Up at Elbow Creek (Greenwich) 'I am neither a young rebel nor an old rebel, nor a tired rebel but quite simply an actor who...

Lifetime by John McEwen 'Whistler and his Influence in Brtain' (Tate Gallery till Oct 30) could hardly have come at a more appropriate moment. It commemorates the centenary of...

Postscripts Richard Ing rams The rise and fall of magazines is for obvious personal reasons a subject that interests me. But it can be of general interest given that a...

Characters Alan Gibson Whatever may happen to the Packer troupe, or gang, or brave company of Pioneers (you get into trouble with somebody or other, however you describe them)...

Lurch about Jeffrey Bernard The Lambourn Lurcher Show, held on Peter Walwyn's land at Seven Barrows, is my favourite annual event and just about the only Sunday in the...