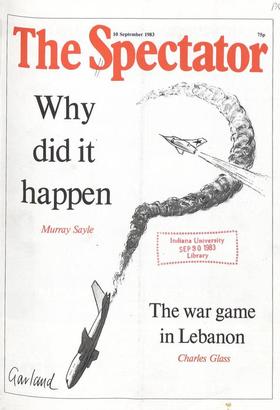 N ot long after the war Keynes said to Chaim Weizmann (to the latter's dis- quiet) that there was no answer to the Palestine conundrum, no peace which could be imposed to the...

Auberon Waugh's capacity for stirring things up in the sub- continent, while not yet on the scale of Mahatma Gandhi's, is pretty impressive all t he same. Some years ago he made...

Thoughts on the Budget Auberon Waugh An unusually winsome photograph of our .M1.new Chancellor which appeared in Monday's Times accompanied the an- nouncement that Mr Lawson...

Tokyo F irst, a statement of personal interest. As a frequent traveller in Asia, a sometime Passenger of Korean Air Lines and a regular voyager along Romeo 20, the now-famous...

Nicholas von Hoffman Washington president Reagan leaped on the shooting down of the Korean aeroplane with the zest and celerity of a younger politician. The news had barely...

The war game in Lebanon

Charles Glass Phis month sees the first anniversary of 1 the assassination of the Lebanese president-elect, Bechir Gemayel, and of the massacre of hundreds of Palestinian...

Nothing can be more right than the advice that Englishmen should take a warmer interest in the West Indian Islands. They are among our oldest possessions, they are perplexed...

Richard West T he strangest thing that I witnessed during a recent trip through the US was a de monstration by Vietnamese political ex- iles outside the Los Angeles City Hall,...

Allan Massie Edinburgh dinburgh is a very odd city. I can't think of an odder. Not even Florence so curiously combines old splen- dour and new mean complacency, though I...

Muddling through Jock Bruce-Gardyne T he international banking crisis is coming more and more to resemble one of those epics of the silent screen, in which each episode ended...

The quotation game Paul Johnson L et us all rally round to protect the principle of privatisation, by which I don't mean transferring British Rail to sensi- ble commercial...

Sir: Richard West (`An Earl from Oz', 3 September) might care to know that the courtesy title traditionally borne by the eldest son of the Earl of Stradbroke is Viscount...

Sir: It would appear as if P.J. Kavanagh is in astutely flashing form off the field and on it, if the nervous Mr Welch is anything to go by (3 September). And, though he may...

Sir: In his article on the press — 'An affront

to enter politics, in order to counterbalance the unpleasant lot who seem to be filling the profession up now. Alas, if the situation is as he seems to think (and he may well be...

Sir: I recently discovered that besides writing his unremarkable Low life column in your journal, Jeffrey Bernard is also being billed in Penthouse magazine as 'our authoritY on...

Eric Christiansen The Year of the Three Kings: 1483 Giles St Aubyn (Collins £11.95) T he year approaches when we celebrate the downfall of Richard III and the "risin g of...

Nigel Nicolson The Collected Letters of Joseph Conrad Vol.I, 1861-1897 Edited by Frederick r. Karl and Laurence Davies (Cambridge University Press 19.50) This is the first of...

Patrick Skene Catling How to be Poor George Mikes (Andre Deutsch 1.4.95) P I used to believe, was about a s 1 funny as terminal cancer of the Pr o- state. Not so, apparently....

Francis King Scandal A. N. Wilson (Hamish Hamilton 03.95) t is on the sad detritus of past political scandals that this highly entertaining novel has been constructed. The...

James Knox C onsidering that Charles Rennie Mack- Ni.,intosh practised as an architect in Glasgow, it is astonishing how many of his buildings survive. His masterpiece, the...

Themes and variations Julie Kavanagh New York City Ballet (Royal Opera House, Covent Garden) L oved the dancing — pity about all that Balanchine' was the unanimous v i ew of...

Shadow boxing Peter, Ackroyd T he Twilight Zone, from which this film has been adapted, was a staple of American television in the early Sixties, when television sets...

Witty and wise Giles Gordon Tales from Hollywood (National: Olivier) The Devil's Gateway (Royal Court Theatre Upstairs) 6 Do you have any linen?' an unkem pt , and unshaven...

Peace and quiet Richard Ingrams N ever having been a good sleeper, it is not often that I nod off during a pro- gramme. But this happened during Face the Press (ITV) on Sunday...

Better days Taki speisal T see that my old friend the Aga has been .I. to Newport, looking over his investrne nt in the Italian boat Azzurra, now thankfu ll Y eliminated from...

Bulldog breed P. J. Kavanagh rr his journal must not become incest- ' uous but an opportunity has arisen which makes the temptation irresistible. The Spectator television...

Write-off Jeffrey Bernard ? t numerous cotnplaints about the vulgari- !! Puerile racial abuse', because I happen to I 1111 told that recently there have been 1 - s comes...

Barney Blackley reports: Competitors were asked for 12 lines of verse commenting on this magazine and its features, the first let- ters of the lines spelling out THE SPEC-...

Anglomania Raymond Keene T his week's title is defined as a craze or in discriminate admiration for what is fl glish, and the term certainly seems to fit International Master...

A prize of ten pounds will be awarded for the first correct solution O pened on 26 September. Entries to: Crossword 624, The S Pectator, 56 Doughty Street, London WC1N 211....

rr wo thousand five hundred miles south- '. west of Anchorage, Alaska, a Korean Air Lines Boeing 747, having strayed from its flight path to Seoul, was intercepted by Russian...

ROBERT HEINLEIN: 'Stranger in a Strange Land' and 'Theory of Games and Economic Behaviour' by Neuman and Morgenstern. An- drew Ashbridge, Attorgarth, Distington, Work- ington,...