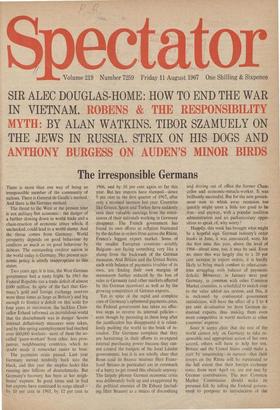 There is more than one way of being an irresponsible member of the community of nations. There is General de Gaulle's method. And there is the German method. The threat to the...

The report of the Estimates Committee on Space is a suitably modish document. Sadly rejecting the idea of a Minister of Space, it settles instead for a Minister of State for...

The end of a shabby affair

When Colonel Leslie Lohan's understand- able sense of injury over certain privileged innuendoes made about him in Parliament by the Prime Minister was referred to a tribunal of...

There was a lot of action down on the Scilly Isles, what with a royal visit, the Prime Minister arriving on holiday, and several Cabinet ministers in the offirxg: no wonder Mrs...

Robens and the responsibility myth

POLITICAL COMMENTARY ALAN WATKINS 'Mr Lloyd George . . with his quick sense of drama, had a tendency, when public feeling was aroused, to search for eminent scapegoats.'— Sir...

GREECE RUDOLF FISCHER I am urging all my friends to go to Greece this summer. Primarily for their sake. The weather is more reliable, the beaches are less crowded, and the...

Back to the valley

AMERICA MURRAY KEMPTON His little defects, as always, look larger than his substantial virtues. His response to the urban disorders was temperate and farseeing, and he could...

JEWS IN RUSSIA TIBOR SZAMUELY Fifteen years ago this week, on 12 August 1952, twenty-six men were secretly executed in Mos- cow. In itself there was nothing at all uncom- mon...

How to end the war

VIETNAM SIR ALEC DOUGLAS-HOME, MP When the Secretary-General of the .United Nations makes a major speech in the context of war and peace it is right that the world should take...

THE ENVIRONMENT REX MALIK What are we going to do about London's trans- port problems? Four months after the Gtx elections and what seems like centuries after the election of...

THE TWELFTH STRIX When, but not until, I start brushing my hair, the two Labradors uncurl themselves and go through that elegant, effortless stretching-and- yawning routine...

NIGEL LAWSON It was, of course, rather foolish of Lord Robens to have gone on television im- mediately after the disaster to assert (in- correctly, as is now abundantly plain)...

THE PRESS DONALD McLACHLAN Every editor, if he watches himself carefully, will detect somewhere behind his back a third hand which from time to time places a wig on his head...

Believe it or not

A TEACHER'S DAY-3 DAVID ROGERS Monday morning. The discussion lesson in classroom four, with my fifteen year old East Enders. 'It's easy enough to believe in God. It's the...

From the 'Spectator,' 10 August 1867—A Parlia- mentary return just published shows that the Ecclesiastical Commissioners have in twenty-one years spent 206,800/. on Bishops'...

TELEVISION STUART HOOD Unlike the programme companies, the BBC likes to feel that there is a rationale for its choice of programmes. Watching Kenilworth I have found myself...

MEDICINE . JOHN ROWAN WILSON A year or two ago Mr Peter Sellers gave a memorable interview on television, in which he described how he had been saved from almost certain death...

PERSONAL COLUMN GILES PLAYFAIR A horribly artificial occasion I found it, the Moors Murder trial, and I questioned whether any of the promised books about the case would...

Grain to the daily

ANTHONY BURGESS We tend to think, not unjustly, that the nine- teenth century produced the most minimal of Britain's minor poetry. Not the most dipso- maniacal,...

Government, Church and Civilisation edited by J. M. Hussey (cup 75s) Byzantium DAVID KNOWLES It is just over a year since the first part of this volume was published and...

DAVID WILLIAMS Sourly commenting in 1594 on the Englishman's passion for living abroad, Thomas Nashe asks: 'What is there in Fraunce to bee learned more than in England, but...

PHILIP LARKIN This is an absorbing book in more ways than tine. Primarily it is an account of the careers and aims of four jazzmen--not, in fact, be- boppers, despite the...

MAURICE PRIOR In his third Harlem novel, Run Man Run (Muller 18s), Chester Himes , had adopted a' rather different style than in his previous books. Drunken white New York...

The grand design ANDREW SINCLAIR U.S.A. John Dos Passos (Penguin Classics 21s) What was U.S.A.? Dos Passos asked himself this question at the beginning of his immense trilogy...

BRYAN ROBERTSON When a number of artists banded together re- cently to deprecate, in a letter to The Times, the announcement of Moore's gift to the Tate of a substantial group...

BALLET CLEMENT CRISP Gamblers all, we are fascinated by chance and by she implications of choice and possibility; in the past few years the antics of random selection have...

MUSIC CHARLES REID This is the point at which we usually begin to sort out our Proms impressions. Or, better still, begin letting them sort themselves out. Forme one...

Beyond us HILARY SPURLING America Hurrah (Royal Court, members only) Sista Here Please (Whitehall) The Flip Side (Apollo) The Taming of the Shrew (AkIwych) America Hurrah, by...

NICHOLAS DAVENPORT A foolish headline in The Tittles Business Sup- plement of 4 August—Insurance Companies Unload Gilt-edged'—reminded me that the in- vestment policy of what...

JOHN BULL Remarkably fierce take-over battles have been fought in the City this summer. If there is a general conclusion to be drawn it is this: de- fenders, in spite of the...

CONSUMING INTEREST LESLIE ADRIAN There's no snobbery about the rum business. The rum distillers admit quite cheerfully that they colour the spirit, which like brandy and whisky...

CUSTOS Equity prices have been drooping this week. On Monday and Tuesday the Financial Tittles or- dinary share index dropped back five points to 353. This is still a high...

Sir: Rhodesia beyond recall! (4 August). If this is so, it will be a tragic outcome of the Rhodesian dispute and a sad confession of the failure - of British statesmanship. The...

Sir: Surely Mr Cohn Welch (21 Jul)) is doing the cause of freedom a disservice when he sug- gests that the only argument for freedom is the .non-rational, conservative one? F....

Sir: Mr Leonard Cottrell (Letters, 4 August) is entitled to his fun, and I take no exception to his misinterpreting me while he is having it; for his letter is very...

Sir: Addison's sPura - rort never printed any thing which excelled Colin Welch's 'Waiting for Lefty' (21 July); what a pity, then, that it was marred by the omission of an 'as'...

to imagine what shocks the future may have in store for us equal to those pro- duced by the automobile and television. If he were ever to read the colour supplements he contemns...

Sir: I must commiserate with John Wells (28 July) on his narrow failure to trace Mr Harold Wilson's political lineage back to Zaphnath- Paaneah, but it serves him right for...

Sir: Allowing Mr Phillips's contention (Letters, 21 July) that pensions 'have been purchased by money which had up to three times the purchasing power of that in which pensions...

Sir: It was kind of you to publish a long review of the first three titles in 'The Making of the Twentieth Century' series, edited by Christopher Thorne, by D. C. Watt (28...

Sir: Printing and the Mind of Man offers re- viewers an irresistible and legitimate opportunity to play the game of 'if this why not that?' This, of course, would have been much...

Sir Denis Brogan writes: To begin with, I think the

view of Mr P. Muir that reviewers should review books before they are published and give the publishers the benefit of their erudition is odd. It surely would have been very...

A ballade of royal progress , - JOHN WELLS Written on the occasion of HRH the Duke of Edinburgh playing polo on a bicycle. There was a time, not very long ago, When twinkling...