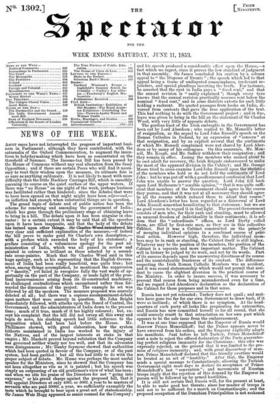 Russia has not yet retracted; Turkey does not quail ;

and mat- ters have gone too far for our own Government to draw back, if it were so inclined; of which there is no symptom. At the head- quarters of each party all looks like...

AscoT races have not interrupted the progress of important busi- ness in Parliament ; although they have contributed, with the saturnalia of the Oxford Commemoration, to augment...

The Governor of Jamaica has just opened the session of

the Colonial Legislature with a speech which augurs so ill for the spirit of the island authorities as to create serious alarm for the sequel. The case of Jamaica is not...

For the first time since his election to the office of Master of the Trinity House, Prince Albert presided on Saturday over the annual dinner of the corporation. A goodly...

AT a Court held at Buckingham Palace on Saturday, the Queen received the Lord Mayor and the deputation from the City of London, who went up to present an address of...

The great annual " breaking-up " of the Oxford University, the Com- memoration, has been celebrated this week ; the Earl of Derby has been installed ; and the chief members of...

FRANCB.—Although Paris is the scene of great excitement on the Turkish question, and the journals arc full of criticisms on the events passing at Constantinople, we have no...

The Bank of Ireland has raised the rate of discount on English bills from 3 to 31 per cent. No alteration has been yet made in the rate on Irish bills. The accounts show a...

By the death of Sir John Hope, a vacancy is created in the representa- tion of Mid Lothian. The Earl of Dalkeith, eldest son of the Duke of Buccleuch, has been named ; and a...

The following correspondence between the Earl of Aberdeen and Mr. Monsell, respecting the resignations of Mr. Monsen, Mr. Keogh, and Mr. Sadleir, appeared in the morning papers...

There was an Irish dispute in the House of Lords

last night, arising out of a motion for papers by the Marquis of WESTSIEATH. The Mar- quis complained of indulgences to persons under sentence, granted by Earl St. Germans,...

SATURDAY. Whether the telegraph keeps pace with the progress of events in the East, or not, unquestionably it fails to keep pace with the public cu- riosity. The Monitear, in...

But the most important event of the theatrical week is

the appearance of Mademoiselle Rachel in the play of Diane; its importance consisting in the fact that a new character is added to the repertoire of so great an act- ress. But...

The Duke of Genoa has deferred his departure for the

Continent until Tuesday next, in order that he may take leave of her Majesty at the drawingroom to be held on that day. The King and Queen of Hanover are expected to arrive in...

Can any Member of the House of Commons inform us

why it is that the Votes are now delivered some hours later than they used to be ? If busy Members get the paper so late as we do, they must often be put to serious...

Regatta, between the picked crews of the Oxford and Cambridge Universities —the Oxonians winning by a foot and a half.

Mr. Mitchell has put forth his programme for the German

season. Herr Emil Devrient is still the chief actor ; and the new pieces produced will be the Wilhelm Tell, the Braut von Messina, and the Fiesco of Schiller, the Torquato Tasso...

We lately gave some account of the celebrated Kffiner Manner Gesang- Verein, in anticipation of the arrival of a large body of its members for the purpose of performing choral...

Mr. Buckstone has signalized his management by the production of

a great number of pieces, which have, at least, all the form of dramatic importance. A play from the pen of Mrs. Crowe, the authoress of Susan Hopley, is one of the novelties of...

The principle of making ballet the leading attraction of Drury Lane— originally invented by Mr. Bunn--has been adopted by Mr. Smith, the present lessee ; who, after keeping his...

Weather was favourable to the opening of the aristocratic races on As- cot Heath, on Tuesday ; but the splendour of Majesty did not shine over the otherwise brilliant scene....

THE DARDANELLES AND THE SOUND. IT has been the fashion of late years, at least in the higher cir- cles of English society, to talk of the wisdom and moderation of the Emperor...

plan for reconstructing the Indian Government, foreshadowing the " bill," appears to be at least as promising as it looked on its first announcement. It seems to us to bp a real...

IT has generally been recognized that the enhancement of the rate of discount at the Bank of England is a great fact in commerce, but that it stands apart from the state of...

OFFICIALISM IN THE SENATE OF LONDON UNIVERSITY.

a debate in the House of Commons might indicate to the Senate how strongly public opinion, and especially the opinion of the classes most interested in the University, is...

THE TRUE NUCLEUS OF PUBLIC EDUCATION.

ACCORDING to the reply which Lord John Russell made to the Public School deputation last week, the machinery for the very imperfect education existing in this country is an...

INCLEFIELD'S SUMMER SEARCH FOR FRANKLIN.. THE voyage of Commander E.

A. Inglefield to the Polar Basin was a lucky one. Captain Inglefield started late in the season— on the 4th July 1852—as volunteer commander of a small screw steamer which had...

Tins narrative of long journeying through " the bridle-roads Spain" has many merits and many drawbacks. The author has a lively style, and a turn for that Bean Brummel sort of...

THACKERAY'S ENGLISH HUMOURISTS. * Mx. THACKERAY is amongst us once again,

and gives welcome notice of his reappearance by the publication of the famous lectures we heard two years ago. Since that time they have drawn crowds of interested listeners in...

BOOBS. ,Tohn De WycliP, D.D.: a Monograph. With some Account of the Wycliffe MSS. in Oxford, Cambridge, the British Museum, Lambeth Palace, and Trinity College, Dublin. By...

BRITISH INSTITUTION: EXHIBITION OF OLD MASTBBS. The collection of pictures by the Old Masters and deceased British art- ists, which the Directors of the British Institution for...

The section of Animals (or as a friend from Guy's insists on our calling it, The Inferior Animals) is the one best represented in the exhibi- tion—that in which works of the...

A sumptuous portfolio of ten coloured lithographic views of the chief spots in the buildings where Wellington lived and died has been issued by Messrs. Colnaghi. The series...

On the 21st April, at Bombay, Lady Yardley, of a daughter. On the 1st June, at Beddington, Surrey, the Wife of the Rev. George Faithful, of a son. On the 1st, at the Rectory,...