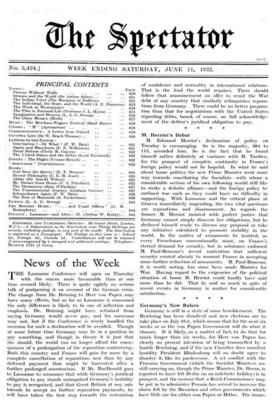 Tuesday is encouraging. So is the majority, 884 to 115, accorded him. So is the fact that he found himself rather definitely at variance with M. Tardieu, for the prospect of...

THE Lausanne Conference will open on Thursday with the omens more favourable than at one time seemed likely. There is quite rightly no serious talk of postponing it on account...

Subscription to the SPECTATOR costs Thirty Shillings per annum, including postage, to any part of the world. The SPECTATOR is registered as a Newspaper. The Postage on this...

Germany's New Rulers • Germany is still in a state

of some bewilderment. The Reichstag has been dissolved and new elections are to . . take place on July 31st, which means that for the next six 'weeks or so the von Papen...

The Franchise in India The reception given to the report

of Lord Lothian's Franchise Committee in India is on the whole satisfactory, and the fact that in different quarters the committee is criticized both for going too far and for...

Mr. Hore-Belisha mentioned in the House of Commons last week that 123 foreign firms had opened factories in this country since the general imposition of tariffs, but the...

The Cabinet and Disarmament • Sir Herbert Samuel, speaking at

Oxford last week, made a statement which, if it means what it appears to mean, has attracted too little attention. He was in favour, he said, of the simultaneous and universal...

The visit of Lord Hailsham and Mr. J. H. Thomas to Dublin, the return visit of Mr. de Valera to London, and the rejection by the Irish Senate of the effective clauses of the...

The Import Duties Advisory Committee, in appointing a committee to prepare schemes for reorganizing the iron and steel industry, has taken the Government at its word. We have...

The Chicago Conventions The Republicans will assemble in Chicago for

their nominating convention a few days hence, to be followed by the Democrats at the end of June. It is taken for granted that Mr. Hoover will be the choice of his party by...

So Lord Strickland has been to Canossa. There is something

almost mediaeval about the language in which a Prime Minister of Malta "humbly and unreservedly asks pardon " for clashing with the Church and her authority, as result of which...

The March of the Veterans

A Blow for Prohibition The transference of Mr. J. D.

Rockefeller, Junior's, weighty support from the Drys to the Wets in America would be a minor sensation in days when the appetite for sensations was less cloyed. Even as things...

An Anglican Lay Ministry It has often been suggested of

late years that the hard-worked and ill-paid incumbents of poor urban parishes might be assisted by lay ministers with fuller powers than the lay reader possesses. But...

Lord Brcntford's death awakens regret as that of many greater men would not. For Sir William Joynson-Hicks was not in any sense great. He was a man of deep convictions and...

7p00 little attention has so far been paid to the report -I- of the Departmental Committee on Persistent Offen- ders issued a week ago, for what is recommended in it is the...

Ottawa and the World

By SIR ARTHUR SALTER. IN last Week's Spectator Mr. H. V. Hodson gave an interesting review of the issues at Ottawa. He rightly Pointed out that several questions may be...

By THE MARQUESS OF DUFFERIN. A NY large extension of the franchise is bound to be to sonic extent a leap in the dark. From experience we can lay down certain broad principles :...

The Individual, The State, and The World

BY PROFESSOR A. E. ZINIMERN. A NOTE in the Spectator last week drew attention to the issues opened up by the recent condem- nation at Lille of a French schoolmaster who had a...

T HE most important business of the week has been the announcement of future business by Mr. Baldwin on Thursday, which shows that the Government intends Parliament to rise...

The Film in National Life

BY PROFESSOR 3. L. MI RES. THE Report of the Commission on Educational and 1 - Cultural Films, published on June 10th, brings to a clear issue much informal discussion, and the...

BY L. A. G. STRONG. T WAS lunching the other day with a man much my -I- senior in the world of letters, and, during the meal, he let fall a very interesting judgement. Some-...

BY MOTH. O all the habits contracted by the human race in the process of its evolution, there is hardly a single one which does not appear absolutely extra- ordinary, and...

DinacT subscribers who are changing their addresses are asked to

notify the SPECTATOR office BEFORE MIDDAY OR MONDA Y OF EACH WEER. The previous address to which the paper has been sent and receipt reference number should be quoted.

has been the chief, almost the only event of the London Season so far as music is concerned. Was the Festival a success? As to the financial aspect (to take first things first...

A Letter from Oxford [To the Editor of the SPECTATOR.' SIR,— On an unusually dry and pleasant Hilary has followed one of the latest, wettest and coldest Trinity terms on...

"M." Directed by Fritz Lang. At the Cambridge Theatre THE cinema to-day enjoys an unwholesome prominence as the handmaid of crime. " I seen it on the films" is, for first...

Happily a champion has been found, but if he is

to win his battle, he will need sturdy backing. Mr. Burrowes, who loves his birds and his England "has entered into a contract to purchase the strip of coast, binding himself to...

It seems that the votaries of grass are enough to support, not only a magazine, but a great scientific organization. And, I suppose, grass is almost the most English thing in...

Tree worship descends to us from the Druids. `` The Men of the Trees," who are now an influential body of priests, have headquarters in London, issue some delightful literature,...

In general the birds that are less punctilious multiply at

the expense of the more sensitive ; that is peculiarly apparent with owls. The barn owl, which is most particular, grows scarce. The brown owl, which has nowadays the courage to...

; and the knowledge of the station is available to all who cultivate a lawn in the 2s. 6d. journal published, when occasion serves, from The St. Ives Station, Bingley, York-...

The aims of the lawn-keeper and the farmer are in

some respects diametrically opposed, but it is interesting to see how Jealots Hill—that great research station for the farmer—and St. Ives work to the same end. The chief...

It is hard to explain why some sorts of birds have such an exclusive taste in nest-building sites. Why should the Kentish plover only nest at Dungeness and the roseate tern only...

A RARE SANCTUARY. England is of an infinite variety that even the bungaloid custom cannot stale ; but there are not many bits of it which are without parallel. There are just...

Fin view of the length of many of the letters which we receive, we would remind correspondents that we often cannot give space for long letters and that short ones are generally...

THE CONDITION OF EUROPE

[To the Editor of the SPECTATOR.] Sin,—I applaud your article on the above (May 28th). I should applaud it still more if the facts were more candidly stated, if you had cast...

[To the Editor of the SPECTATOR.] SIR,—In his letter under the heading above, in your issue of May 7th, Mr. Hardie refers to the growth in our trade with Manchuria since the...

TIIE blocks are moved releasing her. She swings Speeding like wind across the grass-blown ground. Swift in the winter sunlight, wheeling round She pauses, breathes and shivers...

THE UNITED STATES AND THE DEBTS [To the Editor of

the SPECTATOR.] Si L—An American orthodox economist and his political dupe would probably say that if European nations reduced their expenditure on armaments they would have...

'PENAL REFORM [To the Editor of the SPECTATOR.] Si,—Hot 'TOR

the heels of the Dartmoor Assize comes the publication of the Report of the Persistent Offenders Com- mittee. It begins with a condemnation of the present system which has...

POINTS FROM LETTERS A FESTIVAL OF CHURCH MUSIC.

A Festival of Church Music at St. George's Chapel, Windsor, seems to be the first effort of its kind, and to give church music lovers an opportunity to enjoy many masterpieces...

THE "SPECTATOR," JUNE llrn, 1832. The Reform Act is now the law of England. The Bill was read a third time by the Lords on Monday ; the amendments were agreed to by the Commons...

RULES AND CONDITIONS Entries must be typed or very clearly written on one side of the paper only. The name and address, or . pseudonym, of the competitor must be on each entry...

Whitehead's Philosophy of Organism. By Dorothy M. Emmett. (Macmillan. 8s. 6d.) The Approach to Philosophy. By .1. F. Wolfendon. (Arnold. Is. (id.) THE breakdown of the...

God Save the Queen

Akbar. By Laurence Binyon. (Peter Davies. 5s.) • A Boole by Mr. Laurence Binyon arouses pleasant anticipations, for his writings, in a measure rare even among artists and poets,...

The French Revolution and After

Empress Innocence. By M. E. Ravage. (Heinemann. 12,s. 6d.) M. PIERRE GAXOTTE'S French Revolution is an original and very interesting study of a subject which might well have...

The Decameron, of Giovanni Boccaccio, faithfully translated by J. M. Rigg, with an illustrated introduction and fifteen photo- gravures from original drawings by Louis Chalon....

Whips and Scorpions. Specimens of Modern Satiric Verse. • Collected by Sherard Vines. (Wishart. (is.) GREAT satire (at any rate the great satire of English literature) aims at...

' The Rise of Mammals

Dn. Bnoom is among the foremost living palaeontologists. In particular he is one of the world's greatest authorities on the question of the evolutionary emergence of mammals...

Russia; Market or Menace ? By Thomas D. Campbell. (Longmans. 7s. 6d.) THESE are all slight books—of the "fleeting glimpse" type. I enjoyed reading Mr. Griffith's account of his...

Schopenhauer. By Helen Zimmern. (Allen and tinwin. 7s. 6.1.) Tins delightful book is a very old friend of ours in a new dress. When it was originally published, a few years...

A Scot in Russia

An American journalist who has worked in London for eleven years should know a good deal about England and the English. It is no surprise, then, to find Mr. Harold E....

[We shall be pleased to reply to any inquiries arising from The articles we publish on the Modern Home page. Inquiries should be addressed to the Editor, The SPeeraroa, 99 Gower...

MR. DU QUESNE By John Beresford Any friend of Parson Woodforde is sure of a welcome. Mr. Du Quesne, who was his near neighbour for twenty-three years . and was often mentioned...

Lacking the sweep of J. E. C. Bodley's famous study and the brilliance of some recent impressionistic sketches of France by friendly Germans, this sober, straightforward...

Lausanne—and After.—II TirERE are at least two great forces at the present time which may be said to be preventing the return of confidenc e which is essential for any return...

16/011E CONFIDENT MARKETS. Tut new account on the Stock Exchange began cheerfully on Monday in consequence of the strength displayed in Wall Street over the week-end, and a...

For the time being the Stock Exchange is less inclined to look for any immediate attempt to convert the 5 per cent. War Loan to a lower interest basis than was the case a little...