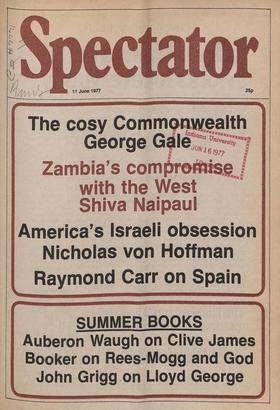 On Jubilee Day, the British people demonstrated a strength, a unity, and a good-humoured dignity which many of our critics, both at home and abroad, had thought altogether...

Avoiding the people John Grigg It used to be an axiom among courtiers and monarchists of the less enlightened sort that the Queen could not afford to behave too naturally in...

While the country celebrated the Jubilee in appropriately British fashion with a form of four-day general strike we left London to walk along the Ridgeway. There were no...

The sweet and sour Auberon Waugh Perhaps it will be considered cheap and tendentious to treat the National Theatre, as Denys Lasdun's hideous edifice on the South Bank is...

Nicholas von Hoffman Washington In late May and June, American politicians spread out across the country to have the cowls emblematic of an honorary doctorate dropped over...

Zambia's compromise with the West

Shiva Naipaul I became alarmed when, without the slightest hesitation, the New Zealander with whom I had been-travelling (and New Zealand, it ought to be recalled, was, at that...

Old Boy ties in the Commonwealth

George Gale In a way, the oddest thing about this most odd institution, the Commonwealth, is its continuing existence. What exactly is it? It is an international body with a...

Market worries Nicholas Davenport I have only to be away from the City for two weeks — writing, you may have observed, a blue-print for a social revolution in our capitalist...

Sir: Mr Kenneth de Courcy (21 May) rightly stated that Nazi persecution of the Jewish minority was not generally canvassed as a specific casus belli. But surely detestation of...

Sir: I would like to compliment the Spectator for printing the very fine article on education by Ross Hutchison (7 May). This was marred, I feel, by the statement in the final...

Sir: In discussing Louis Kelso's theories, Nicholas Davenport (28 May) does not mention that they are now out of the ivory tower and romping away in the real world of the US....

A word for radio

Sir: I think it's terribly unfair of George Gale to attack BBC radio (Notebook 28 May). Radio is very modest in its costs in comparison to television. Woman's Hour in particular...

Sir: Since your Alastair Forbes (21 May) seems to know some French, he must surely have heard of `Le style, c'est rhomme% So what a man is he likely to be! Not much of a man, I...

A special breed of men

Patrick Marnham Art Anti-Art Helene Parmelin (Marion Boyars 0.50) The Tate's bricks are on show again though judging by the lack of response, they seem to have lost their...

Auberon Waugh Fan Mall: Seven Verse Letters Clive James (Faber VI .95) 'Of these verse letters to friends those which appeared in periodicals during 1974-5 have already...

Christopher Booker An Humbler Heaven William Rees-Mogg (Hamish Hamilton £3.50) In the past ten years, Mr William ReesMogg has established for himself a unique place in the...

Peter Ackroyd Gaudete Ted Hughes (Faber £4.50) God knows I must be a weak little helpless person, but I can't take all this suffering any more. Every time I open Ted Hughes's...

Benny Green The amorist who tells you that you must never judge a book by its cover would be confounded utterly by the thoroughness with which his philosophy is shoved out of...

Confusion in Cannes Richard Combs Cannes In the wake of any major film festival, critical energy is traditionally expended on spotting trends and finding threads in the maze...

Good news at Glyndebourne Rodney Milnes Man condemned to hell-fire for abusing women at Glyndebourne (on stage, I hasten to add); man saved from lynching by mother-love at...

Battersea John McEwen One great advantage sculpture has over painting is that it can be shown out of doors. This makes the Jubilee Battersea Park Sculpture Show, providing the...

Ornery radical Clancy Sigel Bound for Glory (ABC 2, Shaftesbury Avenue) The Prince and the Pauper (Canton) As through this world I ramble I see lots of funny men Some will rob...

A new hero Ted Whitehead Hamlet (Old Vic) Drums Along the GInnel (Almost Free) Was Shaw being anything more than provocative when he said that he 'despised' Shakespeare? I...

Ubiquitous Richard Ingrams Writing perforce before the telly's full Jubilee yawnorama is launched on the public I can predict with some confidence that everyone will be...

Irma's Oaks Jeffrey Bernard The weekend's racing was spoilt and overshadowed by two things. Firstly there was Irma Kurtz's horrid letter about me in this journal and secondly...