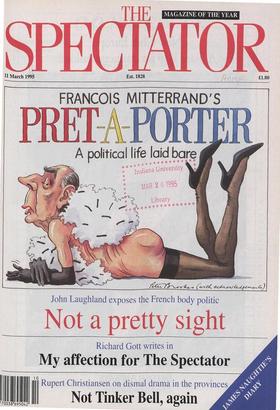 B arings, the merchant bank that col- lapsed last week, was bought for £1 by a Dutch bank called ING (Internationale Nederlanden Groep) which proposed to put some £660 million...

No one protests at the new 'One Bonk and You're Out' rule. The Tories are resolutely defeatist BORIS JOHNSON A I roamed around Westminster over the last few days, I was struck...

JAMES NAUGHTIE A week that ends in Edinburgh is always a good one, even without the exhila- ration of seeing a Welsh dragon having its fire put out (26-13). And the...

Mrs Peter Baring is one of the many who mistakenly believe that inequality of wealth is unfair CHARLES MOORE R uskin wrote that 'sin sticks so fast between the joining of the...

Christian Caryl argues that the murder of Russia's top TV presenter can be interpreted to fit all prejudices. The truth is more complex Moscow I HEARD the news about the...

Will of the week Professor Sir Geoffrey Rudolph ELTON, of

persist. . . IT HAS LONG been denied by many eminent people, professors among them, that there is any philosophical justifica- tion whatever for the practice of punish- ment. I...

PUTTING THE BOOT IN

John Witherow, the editor of the Sunday Times, reports on the Left's outrage at their heroes being linked to the KGB UNTIL WE ran our report based on Oleg Gordievsky's...

ONLY THE BUTLER REMAINS

Martin Vander Weyer recounts a cautionary tale of capitalism, or how Sotogrande-on-Tees and Samsung replaced the Londonderrys SINCE CAPITALISM has not yet passed into legend,...

DOES spelling count? Well, teachers do not seem to be able to decide, if my daughter Veronica's experience is any- thing to go by. She appears to have accepted the principle...

William Oddie argues that the Church of England is the ecclesiastical equivalent of Barings: out of control and financially paralysed WHEN, ABOUT three and half years ago,...

No partners' desks when the garden gnomes take over PAUL JOHNSON t he miserable collapse of the great British bank of Barings, and the still more contemptible way in which the...

Quite unspoiled by failure, Barings' bonuses barge their way up the queue CHRISTOPHER FILDES o that's all right then. The Barings bonuses are safe. Those deserving chaps can...

Sir: I am delighted that, with your editorial reminding readers of Rupert Murdoch's Leninist past (Leader, 4 March), you should have come round to my own view that dealings with...

Sir: In your issue of 4 March Professor Fred Halliday, accused by the Sunday Times of being a KGB contact, has chal- lenged Oleg Gordievsky to 'show a single sentence where I...

Sir: As a practising and indeed well-prac- tised homosexual I

can confirm Alasdair Palmer's opinion that there is no correla- tion between intelligence and penis size as suggested by Dr Rushton. The largest penis of my acquaintance was...

Sir: Taki (High life, 4 March) may not have `seen war and combat from close-up', but Anthony Howard has. He fought at Suez as a second lieutenant in the Royal Fusiliers in...

Sir: With reference to the article by Alas- dair Palmer (`Does white mean right?', 18 February) and further letter from Frank Price (25 February), I would make the fol- lowing...

Sir: I note that the Duchess of Devonshire (Diary, 4

March) shares the belief that John Peel had a hound called True. My understanding was that a monosyllabic name for a foxhound would be every bit as unacceptable as, say, Rondo...

Sir: Delightful Deborah Devonshire makes several plaintive pleas under the catch-all, `Can we do away with . . . ' (Diary, 18 February) Oh, Debs, I do know how you feel! Can we...

Sir: I agreed with virtually all the Duchess of Devonshire's

loves and hates (Diary, 18 February), but must take issue with her over 'flowers in fireplaces'. Of course we all hate the feeble dried arrangements put in front of the...

Mr Gummer approaches regional government rather as Henry VIII approached divorce SIMON JENKINS S ometimes Parliament does capture the essence of a thing. A week ago the Envi-...

Pent up in frowzy lodgings

Kate Grimond WHATEVER HAPPENED TO MARGO? by Margaret Durrell Deutsch, £14.99, pp. 226 M argo became a landlady. In 1947 she bought an Edwardian house in Bournemouth and...

A passion of a vegetable fashion

David Horspool THE BLACK ALBUM by Hanif Kureishi Faber, £14.99, pp. 230 hahid, the young hero of Hanif Kureishi's second novel, spends most of his time trying to make his mind...

Not so clever Hans

Francis King A SAFE CONDUCT by Peter Vansittart Peter Owen, £14.99, pp. 184 I t would be idle to pretend that A Safe Conduct, produced in Peter Vansittart's 76th year, is an...

Something old out of Africa

John Hare FREELAND by J• D• F. Jones Sinclair-Stevenson, £14.99, pp. 293 D enied access to the ocean by a series of ancient islands, 'splashed like cowpats across the chart',...

In Rory O'Keeffe's article last week it was Jack Lang and not Pierre Rosenberg who was protected by the council of ministers from interrogation by Benjamin Rajbaut. We apologise...

A people of polite persuasion

Zenga Longmore THE WEATHER PROPHET by Lucretia Stewart Chatto & Windus, £14.99, pp. 248 T he most important ingredient for a good travel book is a likeable writer. So many...

Michael Bywater DIVORCING JACK by Colin Bateman HarperCollins, £4.99, pp. 282 P oor Colin Bateman, peace breaking out in Ireland like that. His book is about an Ulster...

Dick Kingsett SILVER FOR SALE: CHRISTIES IN THE THIRTIES by Arthur Grimwade Michael Russell, f20, pp. 354 I n As You Like It, Orlando says to Adam, '0 good old man, how well...

Bits of his heart in the right place

Carole Angier DIARY OF A MAN IN DESPAIR by Friedrich Reck-Malleczewen Golden Square Books, £7.95, pp. 219 T his is a most extraordinary document. But not quite in the way that...

Glasgow belongs to him

John Martin Robinson `GREEK' THOMSON edited by Gavin Stamp and Sam McKinstry Edinburgh University Press, £35, pp. 336 A s Wood is to Bath or Wren to the City of London, so...

Regional theatre Money for old rope Rupert Christiansen is at his wits' end over the amount of public funding squandered on third-rate drama 0 ne evening last November I found...

Catalan charms Giles Auty T hose who have been denied a break this winter or experienced one or more doses of this season's particularly virulent 'flu would find it hard to...

Mein camp Ian Hislop Y ou girls look as if you know where the action is,' says Clive James to a group of beautiful young women in the car next to him at a Berlin traffic...

Adventure playground Ursula Buchan A sk a garden designer in what direc- tion she (for they are often she) thinks gar- den design is going in this country and the chances are...

Mining the tycoons Taki Gstaad O nce upon a time the glitzy types left Gstaad on the last day of February. No longer. Arriving last week, having sat out the 'season' in...

Clap and celebrate Jeffrey Bernard I t took them years to discover the bad side effects of Valium but it won't take them such a time to see the ill effects of Prozac as long...

Company car crisis Holly Budd M y company car is a six year-old Rover and we have shared 50,000 content- ed miles. I chose it because of its shape and feel and because it was...

Vain or just conceited? Nigel Nicolson E dward Seago told me three stories to illustrate the extraordinary modesty of his painter-friend Field Marshal Alexander. After his...

Lox, Stock & Bagel I'M SORRY, I was just too ill to go to a restaurant this week. Instead, I did as the Americans and Ordered In. I realise that a home-delivery outfit in...

Absent friends Raymond Keene AFTER HIS TRIUMPH in Sanghi Nagar the indefatigable Karpov travelled directly to the tournament in Linares, Spain. Traditionally, Linares is the...

A first prize of £25 and a bottle of Graham's Malvedos 1979 Vintage Port for the first correct solution opened on 27 March, with two runners-up prizes of £15 (Or, for UK...

Cheltenham thrills Frank Keating CAN IT be possible? This time next year I will be celebrating my Cheltenham half century. In 1946, my pa turned up at lunch- time at school...

Dear Mary.. . Q. Recently I and my dining companion were occasioned considerable discomfort and annoyance by a lady at a neighbouring table of the fashionable restaurant we...