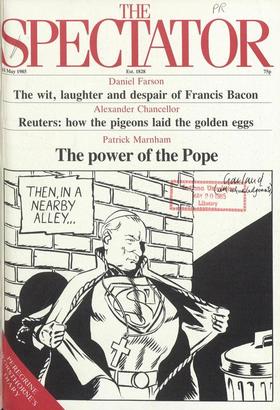 'It's my bunker, I go down there when I can't bear to hear any more about the second world war.' r esident Reagan visited the former concentration camp at Bergen Belsen, and,...

ILLUSIONS OF VICTORY I t is now conventional for the Labour Left to call this Government 'fascist'. Mr Neil Kinnock pandered rather cleverly to this convention in his speech in...

THE Guardian's Moscow correspondent, Martin Walker, has excelled himself again. Like most other correspondents, Martin Webbovich led his account of the May Day parade on Red...

IN A summary of his evidence to the Mansion House Square public inquiry pub- lished in the Architect's Journal last September, Professor Geoffrey Broad- bent, Principal of the...

On Tuesday night, for the third year running, the Spectator

won one of the much prized awards of the Periodical Publishers Association. Jeffrey Bernard was named Writer of the Year, in succes- sion to Murray Sayle. His column, written...

Mr Walker finds a market worth penetrating CHARLES MOORE I n the memorable phrase of Mr Peter Jenkins in the latest Sunday Times, `. . . the banana skins came home to roost in...

A s a committed and consistent pro- semite — even to the point of defending Israel's incursions into Lebanon — I have to admit that the Jews come out of the Bitburg business...

Prince Charles: the unspoken dread of a new development AUBERON WAUGH A Japanese friend I made in the ancient town of Saga on Kyushu island, not far from Nagasaki, surprised...

THE POPE REASSERTS HIS POWER

Patrick Marnham on how the Pope will use Vatican II to out-manoeuvre the progressive forces in the Catholic Church Rome THE unexpected announcement of an extraordinary synod...

Geoffrey Wheatcroft investigates a Zimbabwean murder mystery Harare IF NOT the best then the most striking paper in Southern Africa is the Windhoek Observer. For years, its...

Brian Eads on the plight of Vietnamese refugees imprisoned in the free world Hong Kong 'A bundle of belongings isn't the only thing a refugee brings to his new country . . ....

Andrew Brown discovers the route from Sheffield to the promised land IT'S a good title, but the man is difficult to argue with. He doesn't hector, but he is difficult to stop...

THE THREE FACES OF MARGARET

Ludovic Kennedy on the charm, abrasiveness and artificiality - of Mrs Thatcher POLITICIANS can be divided into two categories; those whose public face is diffe- rent from...

The press: Paul Johnson attacks the way industry is reported I SUPPOSE we have to reconcile ourselves to the fact that our subsidised theatres, especially the Royal...

THERE are worse faults than charity and amiability, so I am obliged to Keith Whit- ten, who this week (Letters, page 21) charges me with them — charitably and amiably. The key...

THE troubles of the Treasury (I was saying last week) include a peripatetic Chancel- lor, who from no choice of his own has had to spend his time since the Budget on the endless...

GOOD news from the world's biggest doubtful debtor: 'The Brazilian plan for settling the foreign debt means, bluntly, that with fundings at £66, readjustments must be made in...

The Government may have stumbled on a winning formula JOCK BRUCE-GARDYNE On balance the inspection of our navels seems rather more constructive. As the great and good were...

The Government of the United States has taken a great stride towards the annexation of the Isthmus of Panama. It was necessary during the recent emeutes there to land Marines...

Sir: May I, belatedly, add an historical detail to your excellent portrait of Peter Quennell (Survivors, 9 March)? In the late 1950s I sent off — for the untold time — a...

Sir: As one of Mr West's academic histor- ians I suggest there is really no mystery ('The war that never ended', 27 April) why we 'handed back' Vietnam to the French. In August...

Sir: I think that the person who writes your letters should write the rest of the maga- zine. J. C. R. Post 36 Craven Street, London WC2

Sir: I don't understand why Auberon Waugh gleefully writes of the Bishop of Durham: 'When a paid-up bishop gets in on the act the whole edifice crumbles' ('Another voice', 27...

Sir: Dr Edward Norman, in his review of B. A. Santamaria's book on Daniel Man- nix (6 April), does an injustice to the memory of the famous Archbishop of Melbourne when he...

Sir: Christopher Fildes takes a charitable and rather too amiable view (City and Suburban, 27 April) of the losses now coming to light at Lloyd's. In the case of his friend's...

Alexander Chancellor The Price of Truth: The Story of the Reuters £££ millions John Lawrenson and Lionel Barber (Mainstream £9.95) A 'though the title of this book, The ..Price...

'Because I'm almost as glad To be miserable as I am Unhappy to be sad,' Said the lone bird to the lamb, 'I'll attempt a song.' And the raven, On his worst day of despair, Cocked...

Brandon Russell Out of Bounds Frances Hill (John Murray £8.95) O ut of curiosity, why would a woman who named her own child after a South American monkey (cf. the dedica-...

As slowly they collapse with strokes, cancers, booze, the ones who dandled us, our warm life falls apart, an eggshell; what comes out is us, at best cadet wrinklies, fledgling...

A. L. Rowse Shakespeare's Theatre Peter Thomson (RKP £6.95) Q hakespeareans who are not historians are mesmerised by what they call his lost years'. They do not realise that...

A cause for celebration Daniel Farson A major retrospective of Francis Bacon's work opens at the Tate Gallery on 22 May R umour has it that Mrs Thatcher ex- IN.pressed dismay...

All that j azz Peter Ackroyd The Cotton Club ('15', Odeon Leicester Square) T he history of this film is well known, at least to those who read the Sunday supplements: the...

Different Rodney Milnes T he programmed reaction to the Royal Opera's revival of Tippett's Priam should probably be 'not as good as Kent Opera's revealing production of last...

Euro-week Alexander Chancellor A t the opening of his chat show last Monday (BBC 1) Terry Wogan was professing himself 'drained of all emotion' after the 175-minute Eurovision...

Hypocrisy Taki I Thad planned to miss the celebrations of America's defeat in Vietnam that the US media so proudly put on last week, by flying to London for a friend's...

So to speak Alice Thomas Ellis O ne of our sons, who does a bit of acting on the side, was recently re- quired to portray a juvenile delinquent for a TV series and one of the...

Excuses Jeffrey Bernard I f I hadn't been invited by the editor to dinner last Tuesday evening it would have been a toss up between attending a talk on the life of the...

Changes P.J. Kavanagh I n that excellent magazine the Spectator — sorry, I mean New Scientist; difficult to tell which these days, without one's glasses — there is a little...

Thud & blunder Raymond Keene L ast week I argued that quality of play (or lack of it) cannot possibly provide grounds for terminaling a world title match. Here, for example,...

No. 1371: Ben trovato Set by Charles Seaton: A short story by Lord Byron, which recently came to light In a bank vault, is due to be published next week in the Times Literary...

Jaspistos reports: Competitors were asked for a song by the Sirens suitable either for the ears of Odysseus or of a present-day sailor. Oddly enough a namesake of Sir Tho- mas...

Very good with drinks T have been to two cookbook

launchings this week, both interesting and original in their own ways. The first was for Jean Conil's Cuisine Vegetarienne Frangaise (Thorsons, £9.95) held at the Arts Club in...