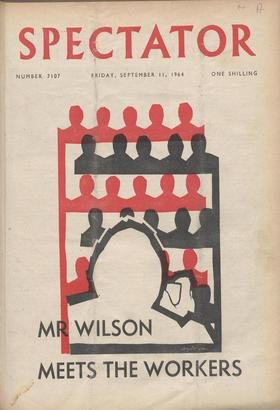 — Portrait of the Week— THOUGH HIS PIPE burnt a

hole in his suit, Mr. Wilson hardly set the TUC on fire when he kicked off Labour's election campaign as the Congress's fraternal delegate. Nevertheless, a news agency misprint...

I tti remarkable how discussions of the 'British nuclear deterrent have come to hang on the emotive word 'independent.' For some Conservatives it has become a battle-cry, for...

BARBARA LUCAS writes : The third session of the Second Vatican Council opens in Rome next Monday, when the 3,000 bishops of the Roman Catholic Church will again assemble...

The Battle of the Pylons

JOHN MADDOX writes: Ever since the mid-Thirties, British electrical engineers have been proud of their lines of steel pylons. For most of that time they have been well aware...

From MURRAY KEMPTON IsfEW YORK T HE New York Democrats rather disliked Robert Kennedy while they quarrelled over whether to nominate him for the United States Senate. But then...

Mr. Wilson Meets the Workers From DAVID WATT At the moment Wilson appeared on the plat- form to be introduced as fraternal delegate, look- ing as bronzed and golden as Shirley...

Colour Problems By RANDOLPH S. CHURCHILL L ORD THOMSON at seventy, like Ulysses and Mr. Harold Macmillan, is 'a man of many devices.' He has been rebuffed by Sir Hugh Fraser...

By CHRISTOPHER HOLLIS Primer's ink is often a cause of eczema.—Scientific Paper. Though men have died from overwork In thinking up a use for leisure, What honest citizen would...

By WILLIAM DEAN N o area in the world is less accessible to Western observation than the frontiers between Russia and China. The two countries face each other for some 4,500...

It was interesting, listening to Mr. Grimond's forcefully delivered speech on Saturday, to ob- serve the ferocity of his attack on the Labour Party. It must be horribly obvious...

Some distinctly bitter complaints against the newspapers were voiced at this conference. Well, one should never expect politicians to feel that the press does full justice to...

The Prime Minister, I hear, has now com- pleted his arrangements for his own campaign- ing at the election. He has been looking around for someone to act as his travelling...

There seems a good case for the suggestion that a 'rural Buchanan Report' should be commis- sioned to consider the traffic problems of the National Parks. The suggestion has...

At times the transistor seems the most undesir- able of all science's offerings. Any moron with a small radio can effortlessly inflict unwanted din upon scores or even hundreds...

THE Liberals were no doubt tempted to abandon their annual conference, as the other parties have done. Such gatherings (of any party) are either potentially explosive—as when...

SIR,—As a practising newsagent I hasten to con - gratulate Mr.

Churchill on his excellent and factual report on 'The Newsagent's Lot.' How refreshing it is to find a contributor who is prepared to gain first-hand practical experience of a...

Sin t —From your commentator's latest article, it would seem that the typical newsagent. alreadY makes a reasonable profit on delivery. There was a time when we had our...

Bryn Griffiths in his interesting letter is right about the

'Thomas bandwagon,' loaded with blinkered parasites and little men chewing away at the choice remains. It certainly rolls on, as tawrence's does, and Fitzgerald's, and soon, no...

his interesting article on the Newsom IcePort (Spectator, August 28), Mr. Mason rightly leachers. Unfortunately, perhaps through lack of condemns the cursory dismissal of the...

S1R,—The Advisory Centre for Education are naive if they suppose that those who failed to graduate will be the best source of accurate information about the reasons for the...

SIR,—What a pity Watchman in 'Spectator's Note- book' should have

spoilt his plea for tolerance for ininority movements (Scotch and Welsh National- ists) with supercilious asininitie,s; 'Dotty, as, I fear, their ultimate purposes irremediably...

COLOUR AND THE ELECTION

SIR,----I never heard such a feeble argument as Mr. David Watt now puts forward. Has he not heard the ancient proverb 'he who pays the piper calls the tune'?` Does he expect...

have been commissioned to edit a book of Letters of Composers. I would be grateful to hear from anyone having any letters from lesser-known composers of general interest....

town the newsagents, so far as evening newspapers are concerned, close for a complete Week in August. This means that a newspaper has to set up its own selling organisation just...

SIR,—We must be deeply grateful to Mr. Lee for his learned, pertinent and interesting letter. Mr. Reichardt's assertion that the cults of Cybele and Attis were cults of the...

Sta,—In the Spectator of September 4, David Watt refers to two criticisms of our methods; the way in which we adjust for people who are on holiday, and the fact that we do not...

Si,—Jan Botha's letter in the Spectator of August 21 calls for some comment, in particular because the views he propounds in his capacity of National Public Relations Secretary...

From IAN CAMERON VENICE That would be a dangerous way to run a festival even if the selection committee and jury weren't a pack of old squares. The outcome here is a festival...

POETRY COMPETITIONS SIR.—May we let your readers know of two

SIR,—! like Strix. It's delightful to have him back as a regular contributor to the Spectator. Wouldn't be surprised if even Alan Brien liked him, too. STANLEY FROUD 817 West...

must answer Mr. Quentin de - la Bedoyere's question because I provoked it, but may I say that my answer is that of an ordinary layman, not a historian? I realise that things are...

One's second abiding impression is of the still unrealised enormity of the debt owed by inter- national art today to the prophetic signs and messages tossed up by the Surrealist...

The Night of the Iguana. (Empire, 'X' certificate.) —The Best Man. (Leic- ester Square Theatre, 'A' certificate.) DESPITE his golden (though garrulous) tongue, Tennessee...

The Striplings. (New Arts.) The plot is simple and far from childlike. Mother has been fatally thrown by a horse. The children set out to run the riding school them- selves, but...

By CHRISTOPHER BOOKER But seriously, I did try. It was nine long weeks ago that, with the words of Mr. Michael Peacock promising a Great New Look for BBC-2 echoing in my ears,...

Poor Old Chap! By SYBILLE BEDFORD T HE theme is mortality. A Single Man* is the tale of one poor player strutting and fretting his hours through one Californian day. It could...

Curved, casual, cool, That form remained aloof: Prodigious human flesh, Its character expressed To feed the eye and mind. Image of a female Body nearly naked On the beach, and...

THE first volume of Richard Church's auto- biography gained many friends. I recall strange scenes of illusory but convincing levitation, to- gether with the brilliance of a...

Lorenzo with a Brush

In at the Kill

GENERAL GRIVAS is a very brave man—and he is not afraid of telling us so on nearly every page of this book. That, however, does not destroy the excitement, spirit of adventure...

The Italian Girl is Miss Iris Murdoch's eighth novel, and is as impeccably written as one would expect from a positive talent immediately recog- nisable by its jaunty elegance,...

By MALCOLM BRADBURY M UCH of the literary criticism that has been written on the fiction of Evelyn Waugh has complained, in one way or another, about the author's snobbery or...

By CUSTOS TNVESTORS returning from their holidays will be astounded at the strength of the share markets — each week registering a new high — but when they become aware of what...

Sterling and the Dollar By NICHOLAS DAVENPORT This question of the so-called 'reserve' cur- rencies keeps cropping up because there is no international money to use. The IMF...

By MARY HOLLAND Without wishing to be unduly coy and/or vain I've never understood what is meant to be so heartwarming about the appreciative holler in the street, let alone...

Rent Collector By WILLIAM HARDCASTLE • AT the age of eighteen, I tried to become an estate agent and 4 - ) auctioneer. This was on Not that I entered the estate agent's...

By ALAN BRIEN THE very pretty, young, ' There sva: nothing to do but start to investigate 1 he problem. Eric Partridges Shakespeare's Bawdy lists many references to the belief...