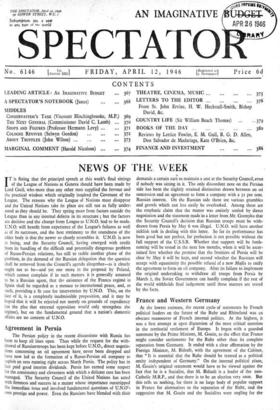 The Persian policy in the recent discussions with Russia has been to keep all lines open. Thus while the request for the with- drawal of Russianotroops has been kept before...

At the lowest estimate, the recent cycle of statements by French political leaders on the future of the Ruhr and Rhineland was an obscure manoeuvre of French internal politics....

NEWS OF THE . WEEK I T is fitting that the principal

speech at this week's final sittings of the League of Nations at Geneva should have been made by Lord Cecil, who more than any other man supplied the fervour and the practical...

In a strictly formal sense the Greek elections are not yet over. Thirty-seven seats remain to be allocated under the proportional representation system, and at the time of...

There may be more bad news to come about the world food situation, but at least there ought not to be many more shocks. The prospect of long-term shortage which, as the recent...

To flog a willing horse was always a work of supererogation if nothing worse, and the more intelligent horses have been known to show a resentment at such treantent nicely...

Those who want to know on what lines nationalised industries and services are going to work will learn nothing from the Civil Aviation Bill. It is no more informative about the...

N his first normal Budget the Chancellor of the Exchequer has I prudently decided on sternly sound finance. The situation which he had to handle was far more hopeful than could...

By VISCOUNT HINCHINGBROOKE, M.P. W HEN Conservatives vacated office last July Britain was much more of a Socialist country than when they assumed office fifteen years ago. The...

By COMMISSIONER DAVID C. LAMB G ENERAL GEORGE CARPENTER will retire from the leader- ship of the Salvation Army under the age-limit in June. A meeting of the High Council of...

By PROFESSOR HERMANN LEVY rr HE high and still-rising costs of distribution have become a I puzzle to consumers, farmers, manufacturers and economists alike. Consumers,...

PPROACHING Cologne from the east by the American tem- porary wooden bridge, you are confronted with a skyline of jagged ruins, only relieved by the towering cathedral, which...

By JOHN WILTON I 1 0 N days of atomic disintegration and international plain speech, not to say decreasing rations, there is perhaps comfort to be found in idle meditation on...

By HAROLD NICOLSON I MET a friend of mine yesterday who informed me that he was thinking of emigrating to South Africa. I was astounded, and indeed enraged, by this proposal. I...

Sir John in Love." At Sadler's Wells Theatre. VAUGHAN WILLIAMS'S opera on the subject of The Merry Wives of Windsor, which was produced for the first time at Sadler's Wells...

SIR,—Mr. Lancelot Forster's article touches the central problems of education. What is education for? On what principles should we set about it? Mr. Forster seems to me to see...

THE EDITOR A SOCIALIST DICTATORSHIP ? SIR,—" Janus," referring to the alarm of " Atticus " of The Sunday Times lest the appointment of Sir Arthur Street to the...

" ORGANISING HEALTH" should be grateful if you would allow me

to comment on your leading article entitled " Organising Health " in The Spectator of March 29th. With the scheme of a complete health service for the whole popula- tion all...

Snt,—In his article on the new French constitution Mr. Carr says that no attention has been given to " the crucial question of the dissolution of a chamber in conflict with the...

SIR,—A writer in the current number of The Round Table quotes with apparent agreement an analysis by Professor Bowman of the basic differences between Eastern and Western...

" A Spectator's Notebook " in your issue of April

5th, Janus comments on the failure of the publication of the National Health Service Bill to produce any sign of public controversy, or of the flooding of the Press with letters...

Snt,—I have just returned from the American zone, and on going through my back numbers of The Spectator came across the unsigned article " American Zone 1946 " in your issue of...

POLAND BEHIND THE , g IRON CURTAIN " ?

Sni,—The "Polish scientist's " letter alleging that there is a prohibition of the import of books into Poland is completely misleading. The so-called " prohibition " mentioned...

sER,--In his letter published in your issue of 15th February last, Mr. A. J. Moore Bennett falls deeply into the error of mischievous misrepre- sentation which he so much...

SIR,—Today I received by post a large, fat, strong envelope filled with pamphlets adjuring me to " Repent, Repent, Hell yawns. Flee the Wrath to Come." In this land of freedom...

The Domain of Preservation

Every county ought to possess an active society to keep an eye on local interests, especially in the domain of preservation. Subjects for its beneficent intervention are...

'SIR,—I was very perturbed to read such an illogical letter from a brother medical man as that of Dr. Lampard. The statements in my letter were correct. If Dr. Lampard only...

A Precious Area It is a remarkable thing that committees

representing three counties, Oxford, Herts and Bucks, have without consultation come to the same conclusion on one point of preservation. These committees or sub- committees...

thin Bible paper and weighing under one ounce, can now be sent by air mail to civilians any- where in Europe (except Germany) for £2 7s 6d. per annum, or Li 3s. 9d for six...

In My Garden A sudden warm spell in spring is

always welcome and does good. but it has some drawbacks. It encourages the evil habit—as evil in plants as in horses—of bolting. This spring has proved the case of those who...

.SIR, —A letter appeared in your issue of April 5th bearing my signature and my address. I did not write the letter and had not, in fact, read the earlier letter (by Mr. Herbert...

A Naturalist's Domesday It has been brought out in investigations

by those county sub- committees—even near London and much more in remoter counties— that " British flora and fauna are still largely unexplored." Technical local knowledge is...

A FAVOURITE phrase in local weather lore is "our blackthorn winter." This year the blackthorn came out fully on the hottest spring day recorded in the annals. People say that...

The Chinese Communists. By Stuart Gelder. (Gollancz. 7s. 6d.) FOR some time past there has been a growing tendency to discount differences between the Chinese and ourselves,...

Trends in U.S.A. and Canada

Now that Harry Hopkins is dead, Henry Wallace is one of the few real links remaining with Franklin D. Roosevelt and his ideas. He served his friend and President loyally and...

" Cass Timberlane," says its blurb, " is a novel of the stature of Arrowsmith, Babbitt and Main Street . . . the intense story of a marriage . . . written with unsparing realism...

A Hapsburg in Mexico

!Mexican Empire. By H. Montgomery Hyde. (Macmillan. 18s.) Tins is a readable book on one of the maddest adventures of nine- teenth-century European politics—the attempt made by...

SOLUTION TO CROSSWORD No. 368

By CUSTOS ALTHOUGH it is not difficult to detect the conflicting influences of political principle and economic expediency in Mr. Dalton's second Budget, I must record my view...

Green-Belt Cities. By F. J. Osborn. (Faber and Faber. -12s. 6d.) THE publication of this survey by a writer with wide experience of town-planning -- Mr. Osborn is chairman of...

Looking for a Bluebird. By Joseph Wechsberg. (Michael Joseph. 9s.

6d.) MR. JOSEPH WECHSBERG writes for the New Yorker. He is therefore at the top of his profession. This collection of autobiographical stories by a Czech musician who became a...