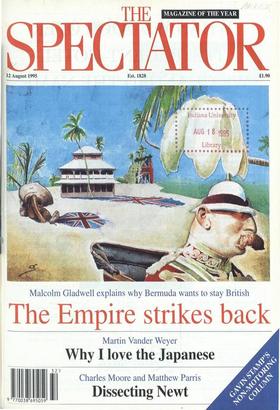 D r Brian Mawhinney, the chairman of the Conservative Party, went on a grand tour of Britain to encourage prospective parliamentary candidates. He announced his intention to...

Fraud and mismanagement stalk Labour councillors across the land BORIS JOHNSON T hey're loony! They're Left! And they're back! Not even the most incompe- tent Tory spin-doctor...

IAN JACK H ow innocent was your childhood? Answer with tick: (a) more innocent than that of today's children; (b) less innocent; (c) more or less the same. I have been reading...

The Newtists are engaged in something dramatic and important. We British should heed them CHARLES MOORE N ewt Gingrich, the Speaker of the House of Representatives, is quite...

WHERE THE BRITISH SUN NEVER SETS

Bermudans will vote no to independence next week, writes Malcolm Gladwell, because colonial status is just too lucrative to renounce Hamilton, Bermuda ON THE evening I...

LAST WEEK I was complaining that the heat had made me crabby. That is nothing to what it has made some of you. Among the bags of kind letters from readers that I have received...

THE GAME IS UP

Robin Harris takes issue with British 'anti-Croat invective' â and attempts to redress the balance UNMISTAKABLY, and to those who know this son of Peterhouse, unnervingly,...

persist.. AN ENGLISHMAN'S home is his cas- tle, wherein no one may enter without permission except the Inland Revenue, the Customs and Excise, burglars, venge- ful ex-lovers...

IN Mr. Churchill's statement about the atomic bomb issued by Mr. Attlee on Sunday exultation at having anticipated the enemy gave way to awe. Mr. Churchill spoke of this...

GOD IS A MONETARIST

The Holy Ghost may play a vital role in the forthcoming Polish presidential election, writes Anne Applebaum Warsaw THE RECTORY is painted yellow; it has a columned porch....

SOME OF MY BEST FRIENDS

Despite the recent outbreak of Japan-bashing, Martin Vander Weyer recalls the country with affection IT WAS mid-way through Earl Mountbat- ten's funeral when I realised how...

Ross Clark visits the River Test, and finds it, like many other British beauty spots, to be heavily subsidised HAMPSHIRE landowners like to say that the River Test is worth...

WHAT A SCORCHER Tourists come from near and far to stand in lines at Madame Tussaud's. Daisy Waugh joins them A WOMAN from Frankfurt told me that it gets like this during...

A French cry for help to repel American verbal borders PAUL JOHNSON T he latest sign of French official despair at the state of their language is a preposterous proposal from...

A house is a machine for living in, so price wars grease its wheels CHRISTOPHER FILDES N ot being a banker or a builder or a Conservative candidate, I like to think that...

A credit to the Swiss

Sir: Christopher Fildes' considerations on the collapse of Barings (City and Subur- ban, 22 July) is deeply unfair in at least one respect: 'You might ask how this sea- going...

Sir: Alasdair Palmer's article (Now then, what seems to be the trouble?', 29 July) contains several errors and half-truths. He asserts that the GMC has put the protec- tion of...

Sir: Auberon Waugh is, of course, right to say that a great deal has been done to allevi- ate the suffering of Bosnians (Another voice, 5 August). What I had meant to write was...

Sir: Robin Harris ('This man is dangerous', 29 July) is wrong to accuse the Foreign Sec- retary of agnosticism on the question of devolution. Malcolm Rifkind has consistently...

Sir: If the monetary union boffins are so 'downcast by the fact that no one can agree even on the name for the wretched Euro- coin due to be minted by 2003' (Politics, 5...

The vision starts to liquefy And lower lip to tremble, The voice begins to thicken And features to resemble The back end of plucked chicken, As infant breathing fills the lungs...

He shot me down Helen Osborne FAT CHANCE by Simon Gray Faber, Â£5.99, pp. 144 R evenge is one of the few sweeteners in the life of a working writer, if he has a drop of...

Matthew Parris TO RENEW AMERICA by Newt Gingrich HarperCollins, Â£18, pp. 272 I first caught Newt Gingrich on CNN in the small hours of the morning, in a hotel in Chile....

To thine own self be true

Alasdair Palmer RE-WRITING THE SOUL: MULTIPLE PERSONALITY AND THE SCIENCE OF MEMORY by Ian Hacking Princeton, Â£19.95, pp. 336 H ow could I have done that? Everyone has asked...

In Valletta honey-coloured softstone churches powdered the air at noon While sun kissed flies and slept in ditches, Gilded the sea's back, struck gold samphires into light....

An interview with George Orwell

D uring the war George Orwell worked as a Talks Producer in the Indian Section of the BBC's Eastern Service. In November 1942 he broadcast an imagined interview with Jonathan...

The Making of Eve

And kneeling one day at the sea's edge God scooped a fist of mud from the earth and pressed it into a shape called man. Its coldness spread like an ache through his fingers and...

Pain in the backside Charles Duff believes sitting still for two-and--half hours is not a rewarding activity h ere is bad news from Stratford. Julius Caesar is being given...

Working in cycles Alistair McAlpine O n 26 August, Phillips are holding a sale in Edinburgh of what they claim to be the first ever offering of cycles and cycling ephemera. As...

Communicating Doors (Gielgud) Boom Bang-A-Bang (Bush) Something About Us (Lyric Hammersmith) What is going on? Sheridan Morley T he problem, in old magical terms, is too...

Waterworld (`12', selected cinemas) Total meltdown Mark Steyn T he best image in Waterworld comes even before the titles: the camera closes in on Universal's famous spinning...

Bum show Ian Hislop G etting the bit between the teeth, Ji lly Cooper's Riders' said the continuity announcer and then added 'in more ways than one.' It was kind of her to...

Delicious steamy smells Gavin Stamp T wo surprises in last week's Spectator: one welcome, one not so. It was cheering to find that, despite starting a 'Motoring' col- umn,...

Halcyon days Taki Gstaad T hirty-five years ago, spending the sum- mer in Gstaad was like committing social seppuku. (This is the samurai suicide of slashing one's stomach.)...

What are friends for? Carole Morin S wans are supposed to be monogamous but the bad-tempered ones I feed in Regent's Park, instead of swimming nicely together, are always...

A bunch of silly girls Jeffrey Bernard I seem to have a gift for inspiring women to utter some of the worst lines that have never been written. I suppose the most well-known...

Teach yourself Greek Nigel Nicolson M y first visit to Athens was in 1935 when my adulation of the ancient Greeks was as intense as any teenager's devotion to his local...

After goulash Andrew Robson BECAUSE IT IS WRONG to double a slam unless you can be sure of beating it whatever partner leads, a 'Lightner' slam double (after Theodore...

IT WASN'T exactly that I was trying to keep Alounak

a secret, but each week I somehow found myself not writing about it. I tend towards the evangelical mode gener- ally: my desire is to broadcast my enthusi- asms, to force them...

Buried treasure Raymond Keene ONE OF THE REVELATIONS of my early chess studies was encountering the weird games of the Hungarian master Julius Breyer. Breyer, active in the...

PC Grundy J aspistos IN COMPETITION NO. 1893 you were invited to write a letter to a public librarian from a PC angle, complaining about the contents and implications of some...

A first prize of Â£25 and a bottle of Graham's Late Bottled Vintage 1988 Port for the first correct solution opened on 29 August, with two runners-up prizes of Â£15 (or, for UK...

Flight from suburbia Simon Barnes LAST WEEK Torvill and Dean retired. A nation is in shock. Half of us thought they had retired years ago; the other half thought they would...

Dear Mary.. . My friend A.G., of Bruton, has come up with one solution for the Duchess of Devonshire, my favourite columnist nobody else writes so feelingly about hens. But can...