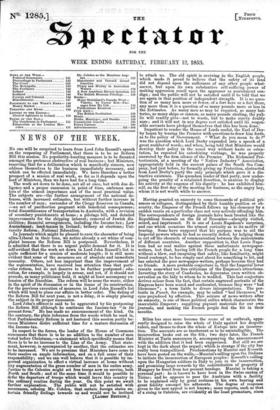 Milan has once more become the scene of an outbreak,

appa- rently designed to raise the whole of Italy against her despotic rulers, and thence to draw the whole of Europe into an insurrec- tion. The accounts are so incoherent as...

H EWS OF THE WEEK.

No one will be surprised to learn from Lord John Russell's speech on the reopening of Parliament, that there is to be no Reform Bill this session. No popularity-hunting measure...

Having granted an amnesty to some thousands of political pri-

soners or refugees, distinguished by their humble position or ob- scurity, the Emperor of the French follows up his clemency by a sudden razzia on a particular class not very...

The Times of yesterday made an important diplomatic announce- ment

respecting the position of affairs in Montenegro. That small Christian province is now invested by a large Turkish army, of- fert ng attractive terms as the price of an...

Tux Quash held a Privy Couneil on Monday, at Windsor Castle ; and pricked the list of High Sheriffs for the English and Welsh counties. The Duke of Wellington, Lord Drumlanrig,...

At a meeting of the Court of Aldermen, on Tuesday, Mr. Alderman Sidney submitted a resolution asserting that it would be unwise and un- just- to prosecute retail dealers within...

The Liberals of Oldham, on Friday sennight, celebrated the return of Mr. W. J. Fox by a public tea-party, to which Mr. Fox was invited. On this occasion, the ladies of the...

The public will receive with very deep regret the announcement of the death of the Right Honourable David Boyle, late Lord Justice-General of Scotland and Lord President of the...

Before the levee held by the Lord-Lieutenant on Monday, his Excel- lency received the customary addresses from the Corporation and Uni- versity of Dublin. In reply to a clause...

FRANCE. âBefore Paris and Europe had finished their meditations on the amnesty of the four thousand of the lowest.claw, Louis Napoleon, M. de Persigny, and M. Pietri, the...

The Queen has intimated to the Archbishop of Canterbury her inten- tion to receive the address of the Prelates and Clergy of the Convocation of the Province of Canterbury on...

SATURDAY. Practically there was little business done in either House of Parlia- ment last night ; but several questions were put to the new Ministers, and answered. In the...

The Milanese news continues to be very imperfect. It consists

of a letter from Turin, of February 8th, comprising a proclamation by Count St:resoldÂ° Lieutenant-Marshal, dated on the 7th, and a private letter from Mi lan of the same day,...

The plot of a one-act piece, produced on Monday at the St. James's Theatre, might up to a certain point serve as a model for our farce-writers. Rarely do we see a number of...

against Mr. Hudson in the action between him and the York and North Midland Railway Company. The Master of the Bolls decreed as follows-" Declare the defendant trustee for the...

&roux ExcuArrox, FRIDAY Arrinixoon. At the commencement of this week the English Funds exhibited increased firmness ; and Consols on Tuesday were done as high as 99 1 , with...

Dublin, 8th February 1853. Sr aâOne of your correspondents, in a late number of the Spectator, at- tributes the acknowledged success of Lord Eglinton, in his dealings with!...

10th February 1853. SraâI regret that the press of England should have thought it worth while to notice the insane ravings of M. Billet ; who is doubtless sufficiently...

The famous Requiem of Mozart was performed in the Moorfields

Ro- - man Catholic Chapel at the funeral of Weber ; but, except on that and perhaps one or two similar occasions, it was never publicly heard in this country (for we do not...

Novelties are stall rare in Parisian records. The Bteuf Gras, whose pro- cession marks the end of the carnival, has succeeded the Emperor's mar- riage in engrossing the...

TILE GENTLEMAN IN PARLIAMENT. IT is not by the tactics of the whipper-in that credit and success are to be attained in the Parliamentary session now opening. Even party...

PALMERSTON AS THE LONDON HERCULES.

MR. COBDEN AS THE MONITEUR ANGLAIS.

Mn. COBDEN has many times been called the English O'Connell, and he seems to be resolved that the parallel shall continue to the end. O'Connell was remarkable for the fertility...

MANCHESTER AND DISRAELI GRAND JUNCTION. THE positions of Derby and

Disraeli are reversed : "last half," it was Derby that was tacit, Disraeli quick of tongue; this half ses- sion, it is Derby who rushes into words, and is contemptuously "...

PIRACY AND MUTINY IN AUSTRALIAN WATERS.

A STORY told in a letter from Geelong is more unpleasant than surprising. The Georgians sailed from Greenock on the 12th July, with 300 Government emigrants from the Isle of...

IF we were to seek a proof that the state of information and opinion in this country has made a decided advance on the subject of slavery in the United States, we should find it...

IT is very proper that the British Museum should be supplied with a copy of every book published ; we are not quite so certain that it is proper to charge the furnishing of that...

MAJOR STRICKLA.ND'S CANADA WEST. * THESE reminiscences of a settler's life and experience in Upper Canada, by the brother of Agnes Strickland, is a book of consider- able...

Vtiazrrn is Brussels, and Currer Bell might have called her new novel " Passages from the Life of a Teacher in a Girls' School at Brussels, written by herself." Of plot,...

PASSAGES FROM MY LIFE."

THE name of the late Baron Muffling is well known as that of a military writer, as the officer charged on the part of the Prussians to maintain the confidential communications...

THE BRITISH INSTITUTION. THE exhibition at this gallery opened to private view on Saturday last, and to the public on Monday,âmitiating, as usual, the year's picture-shows....

La Rosa : Album Vocak. Composto det Luigi Gor- drgiani di Firenze. This is a remarkably elegant publieation both in form and matter ; not only ornamental on a drawingroom-table,...

Mr. Selman, we need scarcely tell our musical readers, is a pianist and composer of talent and reputation. The theme of this piece is in the style of the rapid, whirling...

Der Willkommen me Osborne : Waltzes for the Pianoforte. By