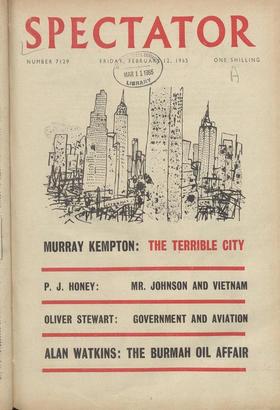 TUB NATIONAL HEALTH SERVICE seemed to stand in danger as, in the first flush of anger at their new pay award, hundreds of GPs threatened to return to private practice. The...

L IBERAL opinion-formers this week have not been at their best. It is a painful if recurrent practice for British reactions to an international crisis to have all the appearance...

Government and Aviation OLIVER STEWART writes : Out of the techno-political turmoil in which it has been embroiled, the British aircraft in- dustry emerges battered, but with...

I T has long been the boast of the Young Con- servative movement (more accurately the boast of those who address them) that they are the largest political youth movement in the...

PAUL VAUGHAN writes: The Review Body did their best,' said a senior BMA official on Monday, 'but all they have suc- ceeded in doing is to show up the deficiencies of the...

DREW MIDDLETON writes from Paris: Post-mortems on General de Gaulle's press conferences go on and on and on. The oracle will not speak again until midsummer. The elysee-...

Jobs Before Colour in South Africa

The Burmah Oil Affair By ALAN WATKINS ' T HE rule of law and the independency of the judiciary,' intoned Sir Eric Fletcher on Monday, 'constitute the bulwarks of our free...

Time and Again By CHRISTOPHER BOOKER O N the morning of Sunday, January 31, the Sunday Times trailed a new series—two long (9,000 words) instalments of a forthcoming book on...

It is hardly surprising that some concern has been expressed at the recent decision by the Court of Appeal that for most practical pur- poses the job of assessing the cash value...

1 ATE but seriously (which is, of course, the l_ d motto of the Cecils) the Spectator has de- cided to get into the act. 'Throw its hat in the ring,' is how James Margach would...

Vietnam: The Choice Before the President

By P. .1. HONEY I TN the course of a private conversation with of my personal friends a few weeks ago, a senior Viet Cong (Vietnamese Communist) cadre described the prospects...

I was pleased to see that Frank Tuohy, a former Spectator novel reviewer, has just been awarded the James Tait Black fiction prize for his novel, The Ice Saints, which was...

I view with some concern the Government's decision to prohibit cigarette advertising on commercial television, coupled with a vague threat on future action against other media....

By the Right The speed with which both Government and

Opposition have- moved to the right on immi- gration is remarkable. Sir Alec's call for tougher measures was answered next day by Sir Frank Soskice, who looks unhappy in his new...

Where is the Ombudsman?

By T. E UTLEY W RAT is happening to Britain's Ombuds- man? His sudden appearance as a promising embryo in the womb of British politics last summer occurred in .a sufficiently...

while Mr. Maudling was speaking to a motion of censure. This week he did a Ken Barrington by walking out when he was caught. His insults to the House of Commons grow more...

Apply Here Recently a friend of mine was asked to

be a referee by an applicant for a job with the BBC. My friend agreed. He was amazed, a few days later, to receive from the corporation a Portentous-looking envelope containing,...

A Kind of Vagrancy

By R. C. H. WEBBER T HE building industry's shop floor is an indeterminable area where the worker, liter- ally and figuratively, seldom has his feet firmly on the ground. One is...

Old Sarum At the by-election at Old Sarum

Everything was harum-scarum. Pale people prefer pink pills, And the Labour candidate, Mr. Mills, Percipiently detected That, if more people voted for him than for any of the...

From MURRAY KEMPTON NEW YORK H ow to explain that an American came back for good to New York six months ago be- cause he felt deprived in Washington, a city of comparative...

SIR,—As a member of the association set up by patients who have lost their patience, as Leslie Adrian puts it in an entertaining article, I should like to comment on the...

SIR,—May I try to dispel Mr. Birnberg's doubt about the efficacy of an Ombudsman? Probability of detection remains the best known deterrent. One can therefore hope that an...

LETTERS TO THE EDITOR From: Lord Boothby, Conor Cruise O'Brien,

Where Honour is Due

SIR,—The Prime Minister has announced that an 'honours list' for industrial achievement is to be compiled based upon US custom. The first recipients should be the US aerospace...

Sus.—1, like Miss Quigly, enjoyed Seduced and Abandoned, but the director, Pietro Germi, is not the magician she thinks. The wife—lorlyish and rather fat'—in Divorce, Italian...

SIR,-1 write as a matter of some urgency to warn you that Quoodle is in danger of an action for defamation of chess character. Not from your un- fortunate correspondent who is...

SIR,—It is difficult to imagine Ulster MP Sir Knox Cunningham not being aware that, as a rule, workers from Scotland, Wales and England do not chase jobs as far afield as...

SIR,--Can some expert in modern English usage please explain why it is that the current idiom prefers 'this' to 'that' and the phonetic 'ah' to any other pronunciation of the...

SIR,' --Brian Crozier's contribution on the United Nations in your January 15 issue seemed remark- ably out of place in your pages. Surely is it not the normal practice for...

A YEAR'S SUBSCRIPTION to the 'Spectator'

costs £3 Ss. (including postage) by surface mail to any address in the world: OVERSEAS AIR MAIL RATES: £4 12s. to Europe, North Africa, and Middle East; LS 10s. to South...

Sta,--Robert Morley, who has always regarded him- self as a popular figure of fun, would welcome any evidence in the form of letters, anecdotes and in- sults that either...

SIIL—Referring to your article 'Britain Without Churchill,' I should like to suggest that if the present Government's attitude towards European co-opera- tion is ostrich-like,...

The New Sound W E went to the Festival Hall's reopening with ears cocked for the new sound, which some of us hadn't noticed or even suipected when the new resonators were...

The Case For Theatre By MALCOLM RUTHERFORD The Zoo Sum); and George Dandin. (Stratford East.)—The Marriage Brokers. (Mermaid.) T ins was a very good week. There had been times...

Clarification S ul KENNETH CLARK is the most civilised of our commentators on the arts. His television appearances are marked by qualities so rare and also so unfashionable in...

By CONSTANTINE FITZGIBBON A CLIClig of contemporary political writing is that ideologies are the modern equivalents of religions. Like all clichés, this one contains its...

The Josh White Song Book. (Elek, 25s.) ONE of the biggest problems facing any auto- biographer who has spent his life in the arms of the Muse called jazz is to know how many of...

Lament for a Maker

This man you see hunched up, blinks at his task, Tobacco smarts his eyes, has to smoke, Else he'd not work, hunched up at his desk. Sometimes he breaks off work, ambles to...

By MALCOLM BRADBURY T AST year The Times Literary Supplement ran two special issues in which a number of critics, English, European and American, wit- nessed to their views on...

The Bad Samaritan is a tarragbn-toned novel constructed with the intense precision (though without the comic bravura) which characterised Anne Rider's first book, The Learners....

CELIA FREMLIN'S g arrulous suburbs are always seethin g with repressed violence. In The Jealous One (Gollancz, I5s.), Lindy is the kind of subtle charmer who turns wives into...

De Gaulle's Gold Standard By NICHOLAS DAVENPORT I T must be a heavenly experience to attend one of the half-yearly press conferences of Presi- dent de Gaulle and listen to the...

By CUSTOS T HE Treasury, on the advice of the Bank of England, is still playing a damping game in the gilt-edged market. Short-dated bonds were moving up well on the firmness...

By LOTHBURY T HE Royal Bank of Scotland has, with its two subsidiaries, Williams Deacon's and Glyn Mills, had a good year. Group profits rose from £1.67 million to £1.99...

Armchair Diplomacy B y LESLIE ADRIAN 'FURNITURE: says this frustrated and frustrating industry's Economic Re- view for 1964, 'is at present not a significant status symbol,'...

B y MARY HOLLAND MY relationships with rac- ing cars and their drivers have been rare and tenuous, to say the least, but not unimpressive. At least, they have impressed me. At...

By ALAN BRIEN HAD intended this week to write about the legend of Don Juan—a folk-tale fantasy hero if ever there was one—but I have re- ceived so many letters from • readers...