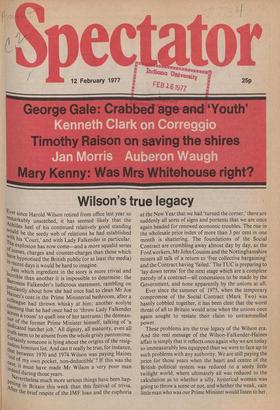 Ever since Harold Wilson retired from office last year so r A e lnarkably unscathed, it has seemed likely that the 'chilies heel of his continued relatively good standing w9ul4l...

The memoirs of Mr Joe Haines, former Principal press secretary to Sir Harold Wilson, provided the best political scandal the country had seen for a long day when they were...

For whom the tumbrils? John Grigg Resignation, as Frank Johnson was arguing recently in this column, is a mug's game for individual politicians. It seldom, if ever, pays for a...

When did so few last add so much to the gaiety of nations? First came the news of Mr Edward Short's title of nobility. In case You had not noticed it, he has adventur° LIMY, or...

Roots, roots, roots Auberon Waugh In the year of the Jubilee it is only natural, I suppose, that some anniversaries should receive more attention than others. 1 January of...

Nicholas von Hoffman Washington We've been very busy over here the last two weeks being ourselves. We are enjoying several major crises, one or two second-rate sensations and...

Jonathan Benthall If, as seems likely, Britain is experiencing a general reaction towards what may loosely be called conservatism, one would expect the phenomenon to be spread...

Timothy Raison Let us avert our eyes from the painful progress of the Government's Scotland and Wales Bill as it lurches its way forward, rather like a brand-new warship which...

Christopher Booker I wish to discuss, this week and next, the fate of two remarkable and unique nineteenth century buildings. The two have almost nothing in common, except that...

George Gale Last Friday I was invited by Thames Television to take part in their Friday debate, which was to do with youth and which was based upon a conference at Wembley...

Mary Kenny Last week the Daily Mail brought us interesting news from the world of advertising and commercial promotion; the latest rage in the selling of clothes, the marketing...

Mistakes Jeffrey Bernard I offer you the story of last Saturday's events at Sandown Park in the hope that you might learn something from my idiocy. After three races I was £20...

Back to Bank rate Nicholas Davenport It continues to astonish me that events which occur in the City of great importance to our working lives fail to get much notice, if any,...

Merchants Merchants of death Sir: How evocative of the 'thirties

was the ti tle—Merchants of death--of the article on arms sales by Julian Critchley (5 February)! Much of what he says makes good sense, and yet . . . What future is there for...

Honest Enoch Sir: Belatedly I read the speech The humbug

of 'compassion', by the Rt Hon Enoch Powell, M P (29 January). This like his widely mis-reported speech on the 'race issue' revealed to me that he was an 'honest politician,'...

Sir: A few months ago Mr Daniel Farson wrote in the Spectator in defence of dogs. He rebuked Mr Bernard Levin for his anticanine arguments and paraded the usefulness of some...

Sir: With regard to recent correspondence in the Spectator concerning the use of the term 'hopefully,' maybe its ambiguity can best be demonstrated by analogy such as...

Sir: A. E. Dean, in his letter (5 February) rushing to the defence of Messrs W. H. Smug, seems to think that the people of Taunton are well served by their local branch of this...

Sir: When the Daily Mail—once a great newspaper—follows the Daily Express to the dinosaur's graveyard, someone seeking a deeper cause for the long decline may dig up David...

Sir: In your issue of 22 January, Nicholas Davenport recommended the Institute for the Study of Conflict's new report, The Survival of the Capitalist System, to your readers. In...

Sir: One was aghast to hear on television recently a worker for the 'Shelter Charity Collection' say that school children should be instructed in school as to which charities...

Postal delays Sir: Some months ago in your correspond ence page

a spokesman for the GPO stated that it was not true that second-class mall was deliberately delayed in transit. On 27 January, I received eighteen such letters from different...

Hugh Dalton Sir: Could I make an appeal to any

reader who knew Hugh Dalton, Labour politician , economist and writer, or who possesses anY documents relating to him ? I have been commissioned by Cambridg e , University Press...

Sweetness and light Kenneth Clark The Paintings of Correggio Ceci l Gould 1Faber and Faber £50.00) The historian of art must always be prepared for ridiculous changes in...

Rose, thou must die

Jan Morris The Cousins Max Egremont (Collins E6.50) I sometimes pine for a cultivated oligarchy: something less than autocracy, but more than populism, to give us government...

Benny Green The Acts of King Arthur and his Noble K nights John Steinbeck . (Heinemann 26.50) E very epoch gets the Round Table it deserves, and as it is now five hundred...

Tricks of the light

Fake cross Clancy Sigal Cross of Iron (ABC, Shaftesbury Avenue) Next Stop, Greenwich Village (Rialto) Anyone who ever served in the armed forces as an other-ranks will feel...

More banality Richard Ingrams Haying last seen Professor Galbraith discussing the ideas of Adam Smith while seated in a French marketplace surrounded by clucking hens, I was a...

John McEwen This is Richard Long's second exhibition at the Whitechapel (till 27 February) in six years, which all too accurately reflects the awe in which the institutions...