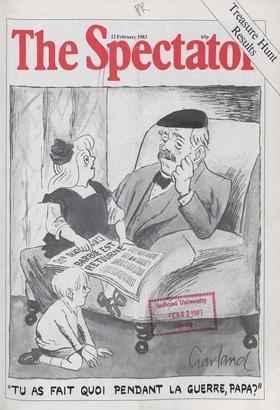 A matter of responsibility

T he Kahan report on the massacres of Palestinians in the Sabra and Chatila camps in Beirut last September compares very favourably with the Franks Report on the invasion of the...

Underspending: a new crime Colin Welch M r Robert Adley, Conservative MP for Christchurch and Lymington, does not normally sound or look like a pas- sionate romantic. But...

I s there another Cliveden set myth in the making and if so, who is the con- temporary Claud Cock burn responsible for its fabrication? These questions are Prompted by an...

Sloth Auberon Waugh ' If the Fourth Commandment is reject- ed by the State, what hope is there for the rest?' demanded Mr William Benyon, Conservative MP for Buckingham,...

Barbie and the collaborators

David Pryce-Jones p lenty of former Nazis more important than Klaus Barbie still find shelter in South America. First and foremost among them is Josef Mengele, who at Auschwitz...

Alexander Chancellor Jerusalem I t was at a Cabinet meeting on the evening of Thursday 16 September last year, about one and a half hours after the first Phalangist soldiers...

Timothy Garton Ash Berlin I f you look at the map of Europe you will notice that someone has made a mistake. Poland has been placed between Germany and Russia. Obviously this...

Nicholas von Hoffman Washington E nglishmen betray their country for sex and/or love; Americans do it for money. But did Michael Straight, the Anglo-American, betray his, or...

The Jewish World, the organ, we believe, of the Reformed Jews in England, pronounces this week in most unmistakeable language against all pro- jects for a restoration to...

Mary Kenny T here is one reason why I am relieved that Charles Haughey has survived as leader of the Irish opposition: my mother remains one of his most steadfast fans. She has...

Roy Kerridge W hen I tell people that I spend a great deal of my time living in YMCAs, they are usually rather surprised. There are three main fallacies about the YMCA. One is...

Richard West T he Greater Â£.ondon Council's Women's Committee has put out a leaflet 'Call- ing All Women': 'Are you happy with your lot? Do you like belonging to the largest...

The results of the Treasure Hunt, together with Christopher Booker's report and the names of prizewinners, appear on pages 32-34.

A graduate on the dole

David Taylor `M r Taylor, alternatively, seems to me a young man of fortitude and resolve. I would have had him in my regiment'. This eulogium is, I am pleased to say, quite...

Old editorial Adam Paul Johnson F leet Street has always constituted a con- vincing argument for the doctrine of Original Sin. It means well. Nearly all its editors have...

Sir: I read the Reverend Mullen's lament for the Church

of England with every sym- pathy. If, as he says, it has become in- distinguishable from Rome, it is because we Roman Catholics have suffered exactly the same ghastly...

It passeth all understanding

Sir: While respecting the Church of England's pursuit of its lost sheep, it seems to me that the Alternative Service Book is not just an aesthetic disaster but a blurring of...

Stray sheep Sir: If your editorial (5 February) is right, the British public is happier to spend Â£1,860 million in 1983-86 to defend the indefensi- ble â the Falklands â...

Sir: Like other regular readers of the Spec- tator, I must occasionally endure opinions expressed therein with which I disagree, but when these occasions are based on...

Sir: Your correspondent Nicholas von Hoffman commits the routine American er- ror of believing (29 January) that all per- sons born between the Rio Grande and the North Pole are...

Francis King Cal T hough they are concerned with entirely different social strata, one high and one low, these novels resemble each other in their succinctness, their...

P. J. Kavanagh Ivor Gurney: War Letters Ed. R. K. R. Thornton (Carcanet Â£12) I n the past it has been maddening, the number of people who patronised Ivor Gurney (the few who...

Alan Bell By Safe Hand: Letters of David and Sybil Eccles 1939-42 (Bodley Head Â£16) S econd World War reminiscences are by no means all concerned with battlefields and...

THIS WEEK'S CONTRIBUTORS Victor Anant works for the United Nations

Enchantment Peter Ackroyd Heat and Dust (`15', Curzon) T he film begins with pictures of its actors framed in oval, as their names appear upon the screen â a deliberately...

Wells farrago Rodney. Milnes The Count of Luxemburg and The Mikado (Sadler's Wells) The Pearl Fishers (Scottish Opera at the Dominion) W hat is to be done with Sadler's...

For the birds Richard Ingrarns w ith all the excitement about breakfast television (where are they now?), Channel 4 has been rather overlooked. I see that in the Daily...

Fresh start Jeffrey Bernard BreakBreak fast television is something of a fast to a man who wakes up, stares at the ceiling and wonders what the hell he did last night and what...

Title-tattle Taki New York S ome of the biggest laughs I've had since the Queen withdrew the knighthood from Anthony Blunt, have been upon hear- ing some of the titles being...

Dying arts Patrick Marnham I t was either Ben Jonson or someone completely different who was told that the stage designer had been paid more than he had for writing a play and...

No. 1256: Togetherness Set by Jaspistos: Communes of one sort or another offer alternative life - styles all over the country. An extract, please (maximum 150 words), from a...

Jaspistos reports: Competitors were asked for a poem either welcoming breakfast TV or heartily wishing it goodbye. I shall not rise the moment dawn breaks To dine on Auntie's...

A prize of ten pounds will be awarded for the first correct solution opened on 28 February. Entries to: Crossword 594, The Spectator, 56 Doughty Street, London WC1N 2LL. 4 5...

Solution to 591: Eve minus apple

Superkids David Spanier T hree British players have risen to the level of very strong grandmasters in- vited to 'super-tournaments' and they make an interesting contrast in...

'Great Spectator Treasure Hunt' took the form of twelve sets of clues published in the Spectator between 9 October and Christmas. The clues are reprinted below with answers....

O nce again talks intended to settle the national water workers' strike broke down. During the third week of the strike seven and a quarter million people were forced to boil...