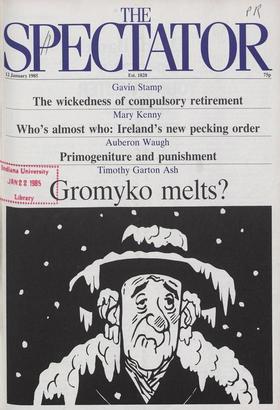 M rs Kim Cotton gave birth to a daugh- ter, conceived by artificial insemina- tion, which she planned to hand over to the American father. He had paid an agency £15,000 for...

Winning back the Tories S ome Tory backbenchers had started to L./ grumble again even before the new term began on Wednesday, this time about the brevity of their Christmas...

T he contention that Britain is now in- tensely parochial in its attitude to events abroad has been illustrated by Unita's capture of three more Britons in Angola. It has taken...

L ast week Nicholas Coleridge com- plained in his Diary about the new safety locks on London taxis, fitted after a campaign by Esther Rantzen to stop chil- dren and the disabled...

P rhe case of 'Baby Cotton' has aroused much public indignation, and much Public confusion about the causes of that indignation. The baby was born as a result of artificial...

T he Spectator, which has so often and so eloquently called for the destruction of closely-knit mining communities, and the dispersal of their inhabitants, can hardly object to...

Let Curzons holde Auberon Waugh T he year 1985 marks an anniversary which may not be judged important in all our lives, so idle have the times become, but which surely reveals...

N ew Year was marred for me by the news that Cirio tomato juice is no longer to be sold in cans. Anyone who is as addicted to Bloody Marys as I am knows that Cirio is far and...

Timothy Garton Ash A fter extensive researches by the Spec- tator Infight team we can reveal that Andrei Gromyko, the supposedly hardline Soviet foreign minister, is a leading...

Andrew Brown Gotheburg M ost of Lapland looks as if the Third World War has already been fought there; and at this time of year conditions approximate to those predicted for...

Christopher Hitchens New York T he speaker was a young man who had followed me into the lobby. I had watched incuriously as he came through the door; it was late at night and I...

Richard West Miami-Managua-Miami T o fly from England to Nicaragua, with an overnight stop in Miami, all you need is a valid United States visa and this, I discovered on New...

Lord Wolseley has decided to make an immediate rush on Metemneh, close to Shendy, where the Mahdi . has stationed a force variously estimated at from 5,000 to 3,000 men....

Do not go gentle

Gavin Stamp O ne of many depressing events in 1984 was the 'retirement of Sir John Sum- merson from Sir John Soane's Museum. His reason, which is understandable but still...

Jupiter celebrates Paul Johnson rr here is a feeling in some quarters, as Geoffrey Dawson might have put it, that too much fuss has been made of the Times bicentenary; Sir...

Bogey for pensions There was a heady moment when the 1 newly-installed Conservative Chancel- lor was tempted to take away the tax relief on mort g a g es. No, not today's...

N ow the CBP of Great Geor g e Street must choose their strate g y for pen- sions. Attrition, or coup de main? They s have a radical Chancellor, who found plenty of excitement...

The jungle is neutral

A t this critical sta g e of the ar g ument, I offer the Chancellor a text from his successor as a city editor — Patrick Hut- ber: 'If a sin g le word had to be found to sum up...

Sir: Your article (Politics, 5 January) has interesting overtones of another Walden. Thoreau was an unenthusiastic taxpayer, and was honest enough to ask the state for nothing...

Sir: John Casey ('Orwell's silliness', 5 January) duly reminds any uncritical admirers of Orwell that he could some- times get matters out of perspective. So evidently can Mr...

Sir: Ronald Butt's article 'The Politics of fashion' (15 December) raises more ques- tions than it answers. He is right, of course, in what appears to be his main, rather...

Sir: Being neither an historian nor a psychologist I feel I am not qualified to disagree with D. Watkins (Letters, 5 Janu- ary) over his censure of Dr Johnson's support of...

Sir: The title assigned to my last dispatch ('Only MIC leaked', 15 December) cries out to be corrected. What offends is the word 'only'. Though factually it is quite possibly...

Generalised judgments Colin Welch T here is much about the Polish dictator Jaruzelski which, to borrow an ex- pression from a prominent charwoman, fair gives me the dry...

Mary Kenny Who's Who in Ireland: The Influential 1000 Compiled and edited by Maureen Cairn- (Vesey Publications, Dublin £IR 17.50, £14) A A 11 Constitutions in emergent...

A. L. Rowse Nottinghamshire: A Shell Guide Henry Thorold (Faber & Faber £8.50) w hat a marvellous series the Shell Guides have been, opening our eyes to all sorts of visual...

Stan Gebler Davies The Inquisition: the Hammer of Heresy Edward Burman (The Aquarian Press £9.95) I t is just as well the Church of England has not got an Inquisition...

Christopher Hawtree The Collected Stories Frank Tuohy (Macmillan £12.95) P ossibly I am present in this story only as a small punctuation mark in a sentence that was already...

His own small sky

Peter Levi An Umbrella from Piccadilly Jaroslav Seifert (London Magazine Editions £5) O ne advantage of the Nobel Prize is that people tend to learn the name, if nothing else,...

The exuberance of Strindberg

Andrew Brown August Strindberg Olaf Lagercrantz Translated by Anselm Hollo (Faber £20) T he man is a byword for moanings and gloom —'Strindberg had a little skunk/ Its coat was...

Pride and prejudice Christopher Edwards Coriolanus (National: Olivier) T he National Theatre's programme for this production of Coriolanus makes a patronising attempt to...

No ordinary men Peter Phillips I t is, then, 1985, and we are perforce to spend it in the company of several musical geniuses. The emphasis of those Who plan festivals and...

Stamping out slugs Ursula Buchan T have sometimes wondered what strong .11-inner compulsion drives gardeners to struggle outside in early winter, equipped with rakes and...

Sign of the times Alexander Chancellor A s a nation, we are not reputed to be fond of abroad, particularly at the moment. This makes it all the more sur- prising to me that so...

• Casualties Alice Thomas Ellis T once heard a person remark with great Ifeeling, 'I hate babies.' He didn't really hate them at all, but I knew what he meant — all the...

Source of wonder Jeffrey Bernard T he label on a bottle of Smirnoff vodka in front of me states that Pierre Smir- noff ceased purveying the stuff to the Czars of Russia in...

Soame Jenyns P. J. Kavanagh • T owe an apology to readers for reverting to a topic, but it is others, not I, who will not leave it alone. For instance, only yesterday in the...

Happy old year Raymond Keene 1 984 was remarkable for English chess. IJon Speelman set the tone for the coming twelve months by winning at Hast- ings and the rest of the year...

Jaspistos reports: Competitors were asked for bromidic advice to youth in the form of a Miltonic sonnet ending in three lines supplied from Housman's 'Fragment of a Greek...

No. 1354: Thriller filler Set by Charles Seaton: At an interesting point in a paperback thriller some spilt liquid has obliterated part of a page and it now runs: 'I turned the...

Some like it hottish I t is the Epiphany today as I am writing. I've just been to High Mass on my motor-bike in the middle of a snowstorm, very terrifying, couldn't see much...