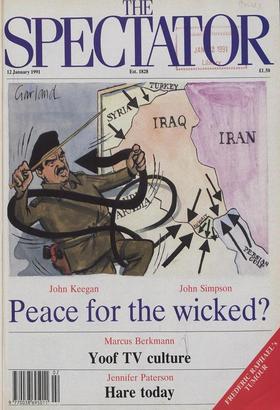 After tilting at the ERM windmill, Don Quixote sets out against Giant Saddam. P atrick Sheehy, the IRA terrorist most wanted by Britain, was found dead next to a telephone box...

I am very glad to enter the New Year in one revised piece, having had a tumour extracted at the tail end of the last one. I shall not boast of the number of ranking...

Noel Malcolm will resume his column next week.

The Tory houses that are built are on sand CHARLES MOORE I t was the General Election of October 1974. I was a schoolboy, and I was standing on a doorstep in Slough,...

THE INSTRUMENT OF CATASTROPHE

Western forces can easily win a war against Iraq. But John Keegan hopes, for the sake of stability in the Arab world, that war will be averted I VERY much hope that there will...

John Simpson meets Yasser Arafat and hears his private views on the Gulf Baghdad FOR a moment there was silence. People reached across the luncheon table to spear pieces of...

Stephen Robinson on American television's preparations for war Washington THE Vietnam war, as every media execu- tive and disgruntled GI vet knows, was lost on the television...

THE despatches in regard to the puni- tive expedition undertaken against Witu last summer, prove the operations to have been singularly well executed. Nine Germans having been...

WHO IS THE ENEMY?

Stephen Handelman finds that the battle-lines of the Gorbachev revolution are getting tangled Moscow SERGEANT Stepan Gudkov woke up in a foxhole near Moscow 46 years after he...

Winston Fletcher argues that politics is not subject to the law of supply and demand WHEN election battle plans are drawn up by the parties, the word 'marketing' is yoked to...

persist . . THE vice-chancellor of the university paid a visit to our hospital last week. I haven't seen such a kerfuffle in a hospital since the one in which I worked many...

newspapers should make more effort to teach the young CAN journalistic skills be taught as a subject? Are schools of journalism any good? Should universities have faculties of...

Sir: I would like to add one observation to Amanda

Sir: You were right to take Sir Leon Brittan to task for confusing sovereignty and authority (Leading article, 15 Decem- ber). A lawyer with his very considerable brains ought...

Sir: The account by Amanda Craig of the gruesome procedures

of legal abortion reminds me of a similar description I read many years ago. At that time, I naïvely thought that people simply did not know that such things went on, and that...

Sir: In your editorial you raise the question of 'ultimate

authority' in our political system, specifically in the area of Euro- pean integration. You appear to think that 'ultimate au- thority' is a sine qua non of organised society....

Sir: What a pity The Spectator should appear to lend support to the Roman Catholic-led anti-abortion campaign by publishing the highly emotive article by Amanda Craig (Poor...

Sir: Congratulations on Amanda Craig's article on abortion. Thanks not

least to its calm, matter-of-fact reporting, it leaves us in no doubt that abortion is a horrendous act. But may I now ask two things: that we stop calling the unborn child a...

Of cars and crows

Sir: May I add to the examples of fractured English (Letters, 8 December) from the Middle East? While travelling in Morocco some years ago, in Tangiers, my husband and I re-...

Sir: Felix Pryor (Letters, 15 December) is lucky to have had any sort of communica- tion from the National Television Licence Records Office (NTLRO). I have written them four...

Sir: As we stand on the brink of a nuclear and chemical onslaught ferocious enough to reduce the Middle East to a Waltham- stow landscape, let us unite to pray for one thing: an...

Sir: In contrast to Mr Moore's experience, (`Another voice', 22/29 December) mine has been one of feeling close to Jesus, particularly when He speaks to me, some- times with...

Sir: I know Paul Johnson meant it kindly (The media, 15 December) when he con- trasted Eve Pollard and me with the stridency of women in the political arena but I can't accept...

Correction from the Gulf

Sir: I was surprised to find Anthony Blond (Books, 8 December) asserting that Sir Roger Casement was shot for treason. He was in fact hanged at Pentonville. Peter Macfarlane...

BOOKS A t the end of this novel, John le Carre

lets out a big secret. The pilgrim of the title, a British intelligence officer on the verge of retirement called Ned, is sent out by the new broom at the Service to urge some...

They watched his indiscretion Then arrested him. They will not name it, What he did. With just six words They broke him - In their report they wrote We stood at a respectable...

Side by sighed by Sartre

First Venetian of the Renaissance

Between the office and the garret

No one will survive

In Peril in Venice

Carried off like Leda on a British Airways swan and landed somewhere on the Lido feeling deathly as Donne in his hymn about shipwreck. Madonnas, madonnas everywhere hold out...

Ulysses with a toothbrush

Ian Thomson THE GENERAL IN HIS LABYRINTH by Gabriel Garcia Marquez, translated by Edith Grossman Cape, £13.99, pp. 304 I am condemned to a theatrical des- tiny,' proclaimed the...

Gracious living Giles Auty 0 ne great blessing of my life is that I have seldom experienced envy. Even when driving past the stately houses belonging to ancient families or to...

Reversal of Fortune (`15', Odeon Haymarket) Trial by cinema Mark Amory T here was no murder. People slip into referring to it but Sunny von Bulow is alive and will most...

The Nutcracker (Covent Garden and Birmingham) A tough nut to crack Deirdre McMahon T he Nutcracker celebrates its centenary In 1992 and its enduring popularity has been...

Accidental Death of an Anarchist (Cottesloe) Instructive pleasure Christopher Edwards D ario Fo's play was inspired by events in Italy in 1969. A bomb exploded in a Milan...

Crucial difference Marcus Berkmann I f you ever need confirmation that, contrary to your lithe, youthful appear- ance, you are in fact sad, old and complete- ly past it, you...

Party poopers Taki New York Thank God my poor daddy isn't around. After all the publicity about my parties he would have died of shame. When I was in my teens he hoped against...

Sawlt of the earth Martyn Harris C lass is largely an English creation. Even Marx who tried to turn it into the engine of history was really only talking about the English...

Lost deposit Jeffrey Bernard But, if I was right that most people got what was coming to them, I would like to know why I have been kicked twice where it hurts in the last two...

The mystery of Mr Prairie Zenga Longmore T he beauty of my sister Boko's tele- phone messages is that they are always concise and to the point. Most people, when ringing to...

Ring out the cold

COMPETITION 12 YEAR OLD SCOTCH WHISKY I n Competition No. 1658 you were in- vited to parody the traditional Christmas quiz. Not an easy task, because the best Christmas...

T he Foreign and Colonial Grandmaster group at Hastings attained category 14 on the World Chess Federation scale for the third consecutive year. There has never been a category...

Limericks, please, three at the most from any one competitor, in which the last word of the first line or the last line is the name of a drink. Entries to 'Competition No. 1661'...

ENGLAND try once again at Cardiff next Saturday, and Scotland ditto in Paris. England's rugby union team has not beaten Wales at the Arms Park for 28 years; Scotland have not...