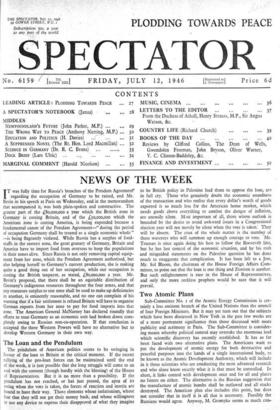 Sub-Committee No. t of the Atomic Energy Commission is cer- tainly a less eminent branch of the United Nations than the council of four Foreign Ministers. But it may yet turn...

IT was fully time for Russia's breaches of the Potsdam Agreement' . regarding the occupation of Germany to be raised, and Mr. Bevin in his speech at Paris on Wednesday, and in...

The Loan and the Pendulum

The pendulum of American politics seems to be swinging in favour of the loan to Britain at the critical moment. If the recent rallying of the pro-loan forces can be maintained...

If ever a lull in the food situation seems likely to occur, the discovery of some factor which was there all the time is certain to wake things up. The latest discovery is...

The report on the Bolton Cup-tie disaster of last March, when thirty-three people were killed and hundreds injured, shows that such disasters could easily be repeated. One of...

Friendly Societies and the State

It was obvious from the start that Lord Beveridge was fighting a losing battle for the friendly societies in the House of Lords en Monday. Given that some candidates in each...

The proposal for a central bureau of scientific information, made at a conference of the British Association and the Royal Society this week, is yet another expression of the...

A debate on colonial affairs from which the questions of Palestine and Malaya were excluded could have fallen flat. But Mr. George Hall's wide-ranging report and the debate...

In any normal contest between publishers and authors I am

naturally on the side of the authors. I am well content, therefore, that a team of the latter, slightly reinforced by literary agents, should have defeated the well-known...

Meanwhile, other incentives to reflection on the paper question present

themselves. It is melancholy to realise that the admirable, almost indispensable, World's Classics series, which were once obtainable at Is. a volume now cost 3s. 6d ; an...

It was essentially a pre-war Garden Party, and the weather

was for once perfect, at any rate for the gossamer-clad ladies. Men, as usual on such occasions, came off worse, for most of them stuck to strict orthodoxy in the matter of...

A resident in West London sends me a package of

seven letters which arrived by the same post addresed to persons supposed to be occupiers of the house where he lives ; actually none of them has lived there for years. The...

By JOHN PARKER, M.P. E LECTIONS for Newfoundland's National Convention have just taken place. This will be called together at a date most con- venient to its members, who have...

THE WRONG WAY TO PEACE

By ANTHONY NUTTING, M.P. W HILE nobody would seek to minimise the difficulties en- countered by the British, American and French Foreign Secretaries in Paris, the agreement...

By H. DAVIES* T HERE appears to be a widespread opinion that, since the Labour Government came into office, politics have begun to play an important part.tin influencing...

By the RT. HON. LORD MACMILLAN j T is a nice point of literary ethics whether it is legitimate to . publishafter an author's death writings which he himself during his life...

By Dr. R. C. EVANS I HAVE just returned from an extended tour through Germany and Austria, visiting many of the scientific laboratories of those countries. It was a mission of...

By LARS ULRiC A PPLICATION for a Dock Brief, my Lord!" These some- what mysterious words, uttered in emphatic (albeit essen- tially respectful) tones by the warder from the...

By HAROLD NICOLSON T 0 those who do not enjoy social revolution or who feel themselves victimised by the fight against inflation which our Government are so wisely waging, -I...

The International Music Festival THE twentieth festival of the I.S.C.M. (International Society for Contemporary Music), the first since 1942 when a festival was held in San...

AMERICA AND ARAB NATIONALISM Sia,—The Zionist protests to America against the hesitating policy of the British Government in implementing the findings of the Angio-American...

Six, May I difter from Mr. Edward Crankshaw in regard to the analysis of Soviet methods which he makes in his extremely interesting review of The Dark Side of the Moon? I, of...

Snt,—I strongly object to the suggestion, implicit in Mr. Crankshaw's

recent review of The Dark Side of the Moon, that N.K.V.D. methods are characterised by any " ecstady of inefficiency." I have lived for years both under N.K.V.D. and under...

Stn,—Let me assure Mr. H. A. Schabbel that Mr. Bevan's reference to " judicial sabotage of socialised services " did not pass unchallenged. On the contrary, as the official...

Sirt,—Your correspondent -Robert S. Hill reminds us that the Jewish people have a claim on Christian charity because they were the race chosen as the vehicle of divine...

Snt,—As a Gentile and a former British officer who served in Palestine for five years during the war, I consider that the present widening gap between the Jews in that...

Snt,—The Minister of Mod established a case in the House on July 3rd for the temporary rationing of bread, and has suggested that this will effect a saving of some 5 per cent,...

Sns,—It is idle for Maung Ohn to represent that U Aung San and the A.F.P.F.L. have been handled too severely by Mr. Manton and that the Government of Burma should encourage this...

Snt,—Miss Ellen Wilkinson, Minister of Education, is reported to have said in a recent speech at Dtirham: " Mr. Churchill, by alleging in the food debate that the food shortage...

Sra,—Canon Roger Lloyd, in his article on Advancing Christianity, gives a feeling of optimism which is not fully confirmed even by the extensive evidence and data of Prof. K. S....

In My Garden Concentration this week has been upon the

trimming of the yew hedges. What labour well spent it is! The firm, square shapes that emerge as austere divisions of the various riots of midsummer colour in the garden remind...

SIR, —I assume that Mr. T. V. Gozzer is Italian. If he is not, then the fact that he stumbles into the wildest assumptions about myself, and the " decadent " circles in Rome in...

Yet only two years ago the doodle-bombs were hurling over that cricket-field at ten-minute intervals, chased by our fighters. I saw a battle waged while a match was in progress....

THE wishful-thiAking prophets who predicted that English life would never be the same again after the two phases of world-war may be right. Custom and tradition are subsiding...

during the past week that have brought a lump to my throat, because of their reminder of les neiges d'antan. I went one afternoon to talk to a Women's Institute party in the...

By a slip for which the author was not responsible

the word " exclusion" appeared as " inclusion " in a sentence in the article entitled Sarawak Sea Dayaks in last week's Spectator. It should have read "Thanks in part to the...

IT would be an interesting experiment to ask half a dozen readers of The Spectator to say what they considered to be the most remark- able achievement of the nineteenth century....

The Creator of Peter Rabbit

Between Wickets. By Ray Robinson. (Collins. 8s. 6d.) THE essence of a good cricket correspondent is that he should make the reader feel he has seen things. Neville Cardus has...

English Literature at the Close of the Middle Ages. By E. K. Chambers. (Clarendon Press. 12s. 6d.) FIFTEENTH-CENTURY literature remains largely in the hands of the specialist....

IF Dr. Pulay, who is evidently both widely read and deeply sincere, had only made up his mind which ball he was going to play with and then—in golfing phraseology—firmly kept...

The Duchess of Malfi. By John Webster. With introductory essays

Mountain Holidays. By Janet Adam Smith. (Dent. 15s.) THE mountaineer will not be in need of encouragement to. read this book because, next to the pleasure of exposing himself to...

TO OUR READERS To ensure regular receipt of Tax SPECTATOR,

readers are urged to place a firm order 'for it with their newsagent or to take out a subscription. Subscription rates 3os. for 52 weeks, 15s. for 26 weeks. Instructions, with...

[A Book Token for one guinea will be awarded to the sender of the first correct c l u don - of this week's crossword to be opened :after noon on Tuesday week, ;o r 53rd....

SOLUTION TO CROSSWORD No. 381

By CUSTOS DESPITE the holidays, the heat and the increasing difficulty of find- ing anything which looks really cheap, markets give me the impres- sion of straining at the...