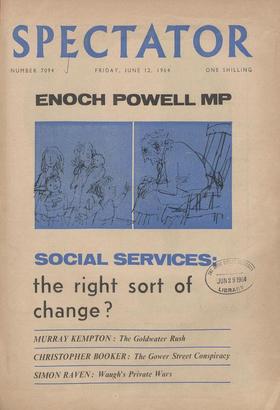 I s there nothing more to be done to avert tragedy in Southern Rhodesia? The Com- monwealth Prime Ministers (almost unanimously) have decided that Mr. Ian Smith shall not be...

BLUE STREAK WAS FIRED at last, with a nine-minute flight from Woomera, after four false starts, the first positive result of £100 million of work. Other- wise this was a week of...

U NDERSTANDABLY enough, a faintly baffled note has recurred in the obituaries of Lord Beaverbrook. For all his love of self-publicity he remained a paradox and a puzzle. The...

XCHANGES between Government and Oppo- sition in recent days on the rising cost of building land are a foretaste of what promises to be one of the more bitter themes at the...

Danger—Capitalists at Work By DAVID WATT T o us night-club photographers of politics the past week has been a great relief. What with a languid statesmanship and pre-election...

From MURRAY KEMPTON WASHINGTON A A ND now there would appear to be no lions 1,,.visible in Senator Goldwater's path to the Republican nomination and only a pride would serve....

The Right Sort of Change?

1 THE SOCIAL SERVICES `Benefits for all are . the enemy of care for the few' By J. ENOCH POWELL, MP rr HE social services today reflect the legislation I of twenty years ago...

W.I The lass with the lager is my wife Enid. She's just had her hair done. The day I was ordered to drink beer by FREDDIE TRUEMAN D URING THE cricket season I can't get home...

By STRIX TN my own interests, I suppose, I ought to keep the episode as dark as possible. There would be nothing furtive in doing so, it is not a question of hushing something...

• A dramatic list of the splendid achievements Of the BBC given in the Sunday Telegraph ends thus: . . It has put on pure mathematics at peak time. What does the Spectator...

Out of the Ashes

Others will have commented on the verdict of the Rivonia trial. The Spectator has its own tailpiece in continuing the story of what is hap- pening to Randolph Vigne, the former...

Tailpiece Not the least puzzling part of Mr. Harold Wilson's

aimless journey to Moscow is why he took with him Mr. Michael Stewart, Shadow to the Minister of Housing and Local Govern- ment. Does either of them think the Soviet methods of...

Happenings is what they weren't in the Deni- son Hall at the beginning of the week, these much-heralded free theatrical events brought over from Paris to throw the...

But when I expose the frequently inadequate knowledge and defective reasoning of burn- ingly sincere do-gooders, anxious to exterminate all vestiges of colour privileges or...

1. The most interesting two-year-old in the Free Handicap isn't mentioned in it. And, of course, it is Irish - trained. J. M. Rogers thinks Santa Claus is the best horse he has...

By CHRISTOPHER HOLLIS Tradesmen in Stratford are complaining that the Centenary Celebrations have brought fewer tourists to the town than had been expected.-At the same dine,...

From BERTRAND DE JOUVENEL PARIS C mu are contemporary changes in the a functions of government that they must in- evitably bring profound changes in the struc- ture of public...

FAIRLIE By HENRY S ENATOR GOLDWATER is, I suppose, something of an inconvenience; no one, certainly, has managed to persuade me that he is anything more, or that he will be...

Open Letter to the Governor of Ford Prison

By JAMES ROBINSON D EAR GOVERNOR, — You may not remember me: I was one of the 1,000-odd men con- fined at your prison during 1963, spending seven months in your charge between...

SIR,—I have been' most interested to sec the article 'The Two Worlds' by Charles Longbottom, MP, in your May 22 issue as well as the letters from Ritchie Calder, Sir Herbert...

SIR,—Mr. Randolph Churchill has tried a double- barrelled defence of Christopher Booker's attack on the Guardian and especially on its editor, Alastair Hetherington. Neither...

SIR,—Since it is of course true, as Sir Cyril Osborne says, that Mr. Thomas and Mr. MacDonald were not responsible for their illegitimacy (and I presume he would hold the same...

A TASK FOR YOUTH

SIR,—One million, seven hundred thousand elderly people have confessed to being lonely, says a recent government survey. No recommendations, however, were made about a remedy....

THE SIXTH OF JUNE

SHOWS AND CHAOS Sia,—Before the Chelsea Flower Show moves I

suggeit Olympia and Earls Court move. Kensington High Street is packed solid nearly every time there is an exhibition at Olympia. Quoodle should see the stationary - Traffic...

SIR,—Under the above heading Quoodle aspires to plain talk, but I still find him too nice in his ex- pression to be useful. 'Personal hygiene' does not mean rinsing one's hands...

SIR, —No doubt you will have discovered by this time that your sneer at the Church of Scotland in 'Portrait of the Week' was unjustified, but what disturbs me is the ignorance...

By CHRISTOPHER BOOKER WELL, is the BBC doing a grand job, or isn't it? The important if largely super- fluous discussion over the future of local radio, coupled with the...

SIR,—I am a 'floating voter,' inclined to be Con- servative,

but being neither a politician nor a politician's hack, both of whom find it difficult not to be ambiguous most of the time, I can afford to be self-complacently honest. Would...

SIR, — Little do you know that you are unpopular with me. . . ! I don't mind being called a simple soul, but I resent being called an old woman, back- ing horses in the name...

SIR,—I do not wish to appear pedantic, but as the Person responsible for the English adaptation of The Cherry Orchard at the Aldwych, I would like to question Mr. Prycc-Jones's...

Martin's Lie, whose world premiere in- augurated the Bath reluctant to accept the proffered honour: Canterbury Cathedral, for which it had been commissioned, turned it down and...

IT would be hard to imagine two ballet com- panies so different as those of Copenhagen and Stutt- gart. To see them both within the same week makes the contrast as re- vealing...

Henry V. (Stratford-on- Avon and Open Air Theatre, Regent's Park.) ry — A Thousand Clowns. (Comedy.) THE Stratford Henry V, coming out of sequence at the end of the cycle, is...

That Side of Paradise

Waugh's Private Wars By SIMON RAVEN TN 1961, when the publication of Unconditional 'Surrender at long last completed Evelyn Waugh's trilogy about the Second World War, it...

Because the relationship was at fault The room became at loggerheads With dropped ceiling and inclined walls, And the floor caved under lights that Dipped like spiralling...

Poet in Exile : Ezra Pound. By Noel Stock. (Manchester University Press, 32s. 6d.) YET another commentary on the career of Ezra Pound: is this periplus really necessary? Does...

THE right and duty of the literary intellectual to concern himself with public issues is a distin- guished tradition in France, from Voltaire and the Great Revolution, through...

There's an empathy between the trees and me in England, an air between us that's constantly beneficent. With a look, the English transplant me elsewhere, though their civil...

IDIOSYNCRASY always adds interest to verse (save, perhaps, to truly great verse), and somewhat lessens that of criticism. That is why, among the various products of Donald...

Pick of the Paperbacks

THERE'S some fascinating reading among the new Penguin fiction. The Apprenticeship of Duddy Kravitz (4s. 6d.), by Mordecai Richter, a brilliant story of a Jewish family in...

ALTHOUGH this is Mr. Malamud's second collec- tion of short stories, there is a makeshift look about it. Perhaps this is because he has had to include work that goes back as...

Out of the Past

The Day the Call Came. By Thomas Hinde. (Hodder and Stoughton, 16s.) Smoke Island. By Antony Trew. (Collins, 18s.) 'THAT was the day the call came. It came without warning. For...

Armageddon 1918. By Cyril Falls. (Wcidenfeld and Nicolson, 27s. 6d.) Armageddon 1918, in the `Gicat Battles of History' series, is the story of the final campaign in Palestine...

The Rootes Deal By NICHOLAS DAVENPORT Ir is always a shock to a socialist to be re- minded that capitalism is an international system— that there is nothing to prevent a...

By LOTHBURY ' Sir the 'tone of Hawker Siddeley's chairman, 'Sir Roy Dobson, in his report to shareholders. He says: `The present year shows signs of being better than...

By CUSTOS A PART from the shares which are involved in bids and rumours of bids the equity markets are still dull and the gilt-edged market positively nervous. There is a...

By BARBARA GRIGGS In my university days, this q uestion of how the summer vacation could be g ainfully spent agitated us intermittently, I recall, throughout much of the summer...

The Persuasive Voice By LESLIE ADRIAN JUST what is a misleading advertisement? I still don't know, in spite of the brave efforts of BBC-1's Choice last Friday ni g ht. After...

By ALAN BRIEN LAST week in the Sunday Telegraph, the columnist Mandrake described a hand-made Italian mouse- trap, built from a Russian design, which was said to be able to...