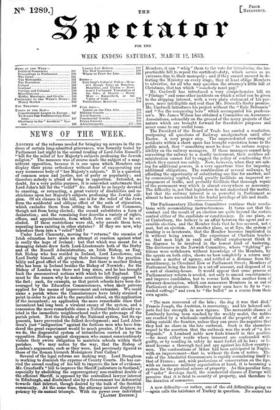 A new difficulty—or rather, one of the old difficulties going

on —again calls the existence of Turkey in question. No sooner has the Austrian Ambassador accomplished his mission of dictating to the Sublime Porte how it shall govern its...

ANOTHER of the reforms needed for bringing up arrears in the re- dress of certain long-admitted grievances, was formally tested by Parliament last night in the second reading of...

It turns out that the conduct and the result of an election are quite beyond the certain. control either of the candidate or constituency. In one place, as at Canterbury, the...

"The man recovered of the bite ; the dog it

was that died." Francis Joseph, the Austrian, is recovering; and his beloved sub- jects feel his strength in new rigours. The mercantile classes of Lombardy having been reached...

Probably the Oldest Inhabitant cannot remember a season in which

winter and spring had so close a struggle. Cold and warmth alternate ; and in the midst of a brilliant sun, which in- vites the green kids from their brown hiding-places, we...

Prince Albert, accompanied by Sir William Molesworth as head of the Board of Works, visited St. Paul's Cathedral on Monday, to inspect the proposed site for Wellington's tomb....

The Queen continues to take carriage-exercise, and to share in the amusements of the Metropolis. On Tuesday and Thursday, her Majesty drove out with Prince Albert in an open...

Colonel Boyle, who has resigned his Crown appointment, was reelect- 'ed, at Frome, on Monday. There was something like an unpremeditated "coalition" between the Liberals and...

At a meeting held in Edinburgh on Monday,—the Duke of Bucclench in the chair,—it was resolved to erect a marble statue to the memory of the late Right Honourable David Boyle, to...

FRANCE.—The Emperor's summary method of finance has now visited the English. In 1847, three English companies established to form rail- ways, from Hazebrouck to Fampoux, from...

Two meetings of the members of the Irish Brigade were held in London last week, to determine on which side they should sit in the House of Commons ; and what policy they should...

Lord Stratford de Redcliffe was at Paris on Wednesday. He had been in conference with M. de la Cour, the new French Minister to Constan- tinople. Mr. Layard M.P. has gone to...

On the 2d March, at Adderbury, Oxon, the Wife of H. N. Goddard, Esq., of Clyffe- Manor House, Wilts, of a daughter. On the 6th, in Eaton Square, the Lady Gilbert Kennedy, of a...

A meeting of the Associated Societies of the University of

Edinburg h was held on Wednesday evening, to nominate candidates for the proposed office of Honorary President. Sir Edward Bulwer Lytton, who had agreed, if elected, to deliver...

The Francis Ilenty, from Melbourne, arrived at Plymouth yesterday. The

telegraphic summary of her news is rather striking, but will need to be confirmed. It states that there was a great dearth of provisions ; and that such numbers of persons were...

SATURDAY. The second reading of the Jew Bill in the House of Commons was car- ried last night by an increased majority, though with a strong opposition. Sir FREDERICK....

The proceedings before the Norwich Petition Committee were yester- day

continued by the examination of Colonel Dickson. He entered into an account of his negotiations with Colonel Forester, Mr. Forbes Mac- kenzie, and Major Beresford, for a seat at...

A decree by the Emperor of the French, issued yesterday,

appoints the opening of the Exhibition of Industry of All Nations for the 18t of May 1855, and directs its close in the September following. It is now quite confidently...

The Royal Italian Opera is to open on Tuesday the 29th of this month. So says the advertisement in the daily papers, and further par- ticulars are promised. Nothing whatever has...

Those Oriental fabulists who delighted in illustrating the doctrine of fatality would have found the history of Drury Lane Theatre a fertile source of apologues. Destiny has...

Mr. Webster will take a farewell benefit on Monday, previously

to his retirement from the Haymarket Theatre. For something like sixteen years he has fought a good fight in the cause of the drama ; and if his farewell be not duly honoured,...

The appearance of M. Lafont on Monday last has completed

Mr. Mitchell's pra3-Paschal company. This favourite actor, who is perhaps more familiar to the London public than any other importations from the French stage, was received with...

A new drama in five acts, by MM. Theodore Barriere and Jaime has been brought out at the Galte, and is the chief novelty of the day. It is called La Boisiire, — a word which...

STOCK EXCHANGE, FRIDAY AFTERNOON. In the early part of the week great dulness was exhibited in the English Funds : Consols until yesterday had only ranged between 991 1 and 1....

CONSTITUTIONAL LEAGUE IN EIrROPE. ALTHOUGH the mission which a sect of enthusiasts wished to force upon Lord Aberdeen last week has no practical bearing on the actual state of...

TO SECURE FAIR PARTJ A mENT.ARY ELECTIONS. BRIBERY and corruption

continue to be the means of returning many Members of Parliament, although the parties most imme- diately interested would sincerely desire to abolish bribery and any other...

OBSTINACY IN THE " ACCIDENT " SYSTEM.

MORE accidents of a very shocking character have stimulated pub- lic attention to Railway affairs. In these brief periods of horror, the public mind is temporarily open to...

Jr the three Lunacy Bills brought in by Lord St. Leonards were at this moment law, a great amount of risk, expense, trouble and pain would be saved to numbers of people. On a...

WHERE TO DRAW THE LINE.

AN illustration is furnished to Lord St. Leonards as to the neces- sity for one of the most valuable of the new provisions in his bills, by the appearance of an unfortunate...

Lmn_inrEs for the working classes are the rage : there is going to be one in the City, the Lord Mayor approving ; one in Marylebone, one in 'Westminster ; there is one in...

EARL GREY'S COLONIAL POLICY. * THOSE who expected any "revelations" from this work, or any exhibition of "the temper of Grey," will be disappointed. The facts it contains are...

THE freshness of the field, the objects of the author, together with considerable powers of observation and description, give a good deal of attraction to this volume from the...

NEWIIIN'S UNRHYMED TRANSLATION OF THE ODES OF HORACE. * PROFESSOR NEwsfax

has published this version of The Odes of Horace mainly for the benefit of that increasing class among us, who, though their early education has not given them the mastery over...

BANNERFORD, OR THE VALLEY OF GOLD. * LIFE and adventures in

California are the most striking feature of this romance, though complicated and overlaid with other sub- jects: an introduction in England, occurring years before the opening...

Tins novel, like the previous works of the authoress of "Passages in the Life of Mrs. Margaret Maitland," is less distinguished for its story than its delineation of Scottish...

Boom. White, .Red, Black. Sketches of Society in the United States during the Visit of their Guest. By Francis and Theresa Pulazky. In three vo- lumes. A Critical History of...

GIIIZOT ON THE FINE MITS.* To the students of M. Guizot's works this book will present interest on more grounds than one. It is an early production; having been composed...

NAVAL GAZETTE. ADMIRALTY, March 5.—The following promotions have this day

taken place con- sequent on the death, on the 4th inst. of Admiral of the Red the lion. Sir T. B. Ca- pel, G.C.B.—Admiral of the White the Right Hon. James Marquis of Thomond,...