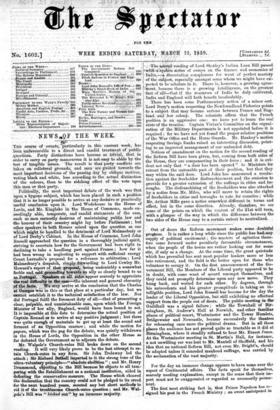 Out of doors the Reform movement makes some doubtful progiress.

. It is rather a long while since the public has had:any supply of political excitement ; the masters of agitation there- fore come forward under peculiarly favourable...

NEWS e OF THE WEEK.

TIEE course of events, particularly in this current week, has been unfavourable to a direct and candid treatment of public questions. Party distinctions have become so trivial,...

ibtotr'en series of essays on the finance and economics of India,—a dissertation conspicuous for want of perfect mastery of the subject, especially amongst some whom we might...

For the day an immense change appears to have come

over the aspect of Continental affairs. The facts speak for themselves, scarcely needing explanation, except in the sense that their im- port must not be exaggerated or regarded...

Amongst the distinguished arrivals which are notified in va- rious

parts of the vrorld,—the Grand Duke Constantine at Malta, Mr. Gladstone in London, and others,—there is none less ex- pected, or more decidedly agreeable to the public, than the...

The presence of a Reform, or as Ministers call it, a Representation Bill, in Parliament, has imparted some life to the out-of-door agitation. In the Metropolis there have been...

Considerable light has within the last few days been thrown on the position of France and Austria, and the relations of both to Germany. First in point of date, though not of...

Mr. Sotheron Estcourt was reelected on Tuesday for North Wilts without opposition. He was proposed by Sir John Awdiy and seconded by Mr. Lovell. In his speech Mr. Estcourt spoke...

In the General Report of the board of Trade on the railway and canal bills of the present session, issued on Wednesday, it is remarked of the infra-metropolitan lines—" My lords...

The public were startled on Tuesday with news that Poetic, and his companions, sixty-nine in number, had entered Cork harbour in the David Stewart. It may be remembered that the...

The Queen held an Investiture of the Order of the Thistle at Bucking- ham Palace on Monday ; when the Marquis of Allan was invested with the insignia of the Order. The Queen...

ST Ital.—The principal events in France will be found elsewhere; but some remain to be chronicled under this head. Thus the Finance Commission of the Legislative Body called...

Lord Murray, a distinguished Scotch lawyer, died on the 7th March, at his house in Edinburgh. He was in his eighty-first year. "In the case of one so well-beloved, says the...

SATURDAY AFTERNOON. The great meeting in the Guildhall yesterday must be added to the list of Metropolitan demonstrations. It was not very successful. There was great uproar....

de- livered a lecture "On the Metals obtained from Lime and Magnesia, and their congeners." These metals—Calcium, Magnesium, Lithium, &c., were stated to be remarkable for their...

A report has been set on foot in Paris, and

transmitted to London by more than one channel, that the retirement of Prince Napoleon is to be softened by his elevation to-the post of Grand Admiral. Should such a course be...

STOCK EXCHANGE, FRIDAY AIPTEENOON, The advance which took place in the English Funds on. Saturday, owing to the article in the Moniteur, was followed on Monday by a further...

In the House of Commons last night the main subject

of discussion was the expenditure on the Navy. When it was proposed to go into Committee of Supply on the Navy Estimates Lord CLARENCE PAGET drew attention to the vast sums...

TRADE has been very unequal during the last week, in the 'various general warehouses of the City ; an universal flatness having been ex- perienced the last day or two, while...

There is a variety in the spring patterns of waistcoats chiefly marsella, which material has lately been worked in an unprecedented manner, and which will supersede all other...

(Trona our mon (Jorrespondent.) it is high time that our gay and brilliant carnival should have come to a conclusion ; for it is certain that our belles dames must sooner or...

IN our last number we noticed some dashing remarks made by Mr. George Francis Train, on the delay of the English Government to reduce the post- age between this country and the...

The prevailing fashion favouring the use of lace has considerably stimulated the Honiton trade. The high art bestowed upon this lace in design and care in manufacture, over that...

TO CORRESPONDENTS AND ENQUIRERS. In several cases correspondents have asked us for the address at which newly in- vented or improved articles of trade may be procured. We...

The present week has hitherto been barren of events, but tonight (Saturday) Miss AmySedsewielr will take her betefit at the Haymarket, and a new piece, entitled The World and...

The patrons of the Grand Opera are now occupied with a vast work by M. Felieien David, produced on Friday the 4th instant, with the title Hfrcuianum, such being apparently the...

The Royal English Opens at Covent Garden closes this day

week, by which time Mr. Gye will require the theatre in order to prepare for com- mencing the Royal Italian Opera season on the 2d of April. Mr. Harri- son is to have his...

SHAM REPRESENTATION OF MAJORITIES: ELECTORAL LMPOST1JRE8. fint—The return made at the recent election for Marylebone has been spoken of as an indication of the state of feeling...

l'HE GOVERNMENT REFORM BILL COMPARED. IN order to present our opinion upon the Government Reform Bill, and the present bearing of the whole question, we will put it...

ON first setting his foot in the land of freedom, Poerio is saluted with the question whether or not he and his companions shall be prosecuted for piracy ? The question is asked...

It appears from official documents that 773 miles of railway

have been opened in France during the year 1858. The total length of railway in working order, amounted on the 31st of last December, to 5424 miles. The gross receipts from all...

PITCH REFORM IN FRANCE AND ENGLAND.

EVERY one who is at all conversant with music knows that the indefiniteness of what is called musical pitch is a great practical inconvenience. When we speak of any particular...

LORD JOIN RUSSELL'S LEFT OF FOX.* WHEN the member of a great historical family who has passed his life in polities, and filled the highest offices in the state for some- thing...

MARY HOWITT'S HISTORY OF THE UNITED STATES. * A B.EALLY philosophical

history of the United States of America has yet to be written ; for though Bancroft's is an excellent nar- rative, especially in its plan, and Hildreth's is a plain and...

IT is more than a compliment, it is a praise to say of this Hand- Book that the careful digest of useful and necessary matter renders it less available for literary notice than...

THE REVEREND S. W. KING'S PENNINE ALPS.* THE field of

Mr. King's Alpine explorations was the Italian slopes: of the great mountain range called the Pennine Alps, that sepa- rates Piedmont from Switzerland. The most stupendous part...

A novel by Mr. Trappe, a volume of poetry by Mr. Patrick Scott, and annotations upon Paley's "Moral Philosophy," are the chief publi- cations of the week. The novel we expect...

. No less than 4150 pictures have already arrived for

the great Paris Exhibi- taco,. and some two thousand more have been promised. The term for sen ding in paintings ended with the first of March; a large number of artists,...

Through the aid of Mr. Graves and at the price

of 300 guineas, the Historical Portrait Committee have obtained a very choice likeness by Garrard of the celebrated Countess of Pembroke, "Sidney's sister, Pem- broke's mother."...

THE NEW TURNER AND VERNON GALLERIES. The Chancellor of the Exchequer has shown great tact in the settle- ment of the vexed questions for the fit accommodation for the National...

The little stir or promise there is in the publishing world seems with Messrs. Chapman and Hall. They announce in the course of the month Mr. Thomas Adolphus Trollope's "Decade...

On the 30th of January, at Calcutta, the Wife of Sir James Cohill of a son. On the 1st of March, at Pinner Grove, the Lady Milman, of a daughter. On the 3d, the Baroness de...