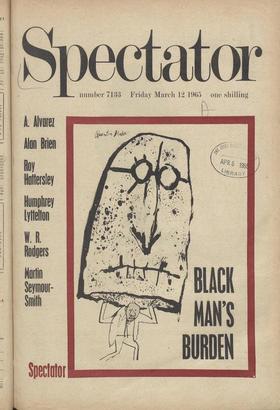 Portrait of the Week— WILSON'S WEEK: the Prime Minister went

to Ger- many and put on a skilful performance, saying all the right things in all the right places. The Germans were reassured on reunification and on plans for an Atlantic...

T HE Government defeat last week could not have come at a better time for the Opposition, nor a more awkward one for the Government. For the Tories it came immediately after...

Mr. Wilson and the Germans SARAH GAINHAM writes from Bonn: The very factor that could have made the Prime Minister's visit to Bonn disastrous in fact turned it into a success....

OUR MOSCOW CORRESPONDENT writes : Not so much a meeting, more a rendezvous of the reluctant: they came, they talked, and they left without achieving much. The real im- pact...

PAUL VAUGHAN writes : While the ceiling falls down in the hospital service, the balloon continues to go up in general Practice. On Monday the BMA announced that it had collected...

Top People's Daily By CHRISTOPHER BOOKER K LEN-EYED observers of Fleet Street's comings and goings have, in the past few days, noted the extension of hospitality by at least...

It is proposed to withdraw the bus service to Clanton and Chin on account of the petrol tax. Clunton and Clunbury Clungunford and Clun, Were the furthest places The buses run....

PAUL LEWIS writes from Brussels : Last week's agreement to set up a single executive authority for the whole of the EEC is one more step towards the Community's goal of a fully...

After the Defeat By ALAN WATKINS T OWARDS the end of last Friday a minister I could be heard muttering angrily: 'Calls him- self a Chief Whip, does he? I could do the job...

From MURRAY KEMPTON NEW YORK T in Americanisation of East Asia must be proceeding more tidily than the dispatches have encouraged us to believe. General Nguyen Khanh has...

Cricket in the Sun I wish I had been in

Jamaica this week. Not just for the sun or its beauty or the friendly gaiety of its inhabitants. I read the reports of the first Test Match for the unofficial champion- ship of...

The Disenchanted Mouse Recent leading articles in the Spectator have

been entitled The Mouse That Roared' and 'The Disenchanted.' Connoisseurs of the political art may take some enjoyment from these extracts from the speech of Mr. Zilliacus in...

T HERE was rough poetic justice in the defeats 1 the Government suffered last Friday on the procedural motion to bring the Abolition of Capital Punishment Bill into the full...

This chill winter has already seen the deaths of many political figures of the first magnitude: Churchill, Woolton, Monckton, Alexander of Hillsborough, and now Herbert...

In Praise of Satire

Motions and counter-motions on a satirical BBC programme chase each other across the order paper of the House of Commons. Grave comment CI did not see it myself') fills the...

The Intransigent City By W. R. RODGERS VEE here,' said a political speaker to a heckler at Hyde Park Corner, 'any more awkward- ness from you, my man, and you'll find 1 can be...

A Sort of Immortality By ROY HATTERSLEY, MP I N those sophisticated circles where the eco- nomic theories of the late eighteenth century have recently returned to fashion,...

SIR,—The reply by Marjorie Wallace to my criticism of the late Pope Pius XII, and of the rigid modern despotism of the Catholic Church, is a feeble attempt to defend what is...

Sta,—As a British subject and one who is immensely and

unashamedly proud of his country's history and traditions, I take the strongest possible exception to the gratuitous denigration which informs the article from your...

Germany and the Queen

S1R,—Your Bonn correspondent raiscs the question of a change of attitude on our side of the Anglo- German relationship. We may have been goaded into change to achieve...

SIR,—Quoodle tells us in some sorrow that it took him one and a half hours to get round the North Circular to London Airport the other day and con- sequently he missed his...

The Rule of Law

SIR, —Commenting last week on the new system of electing the leader of the Conservative Party, Quoodle calls it a victory for Bonar Law. And he goes on to say, inter alio, that...

sm,—i can understand when the British people discriminate against Indian, Pakistani and African immigrants, since they are different in so many Ways from the British. But it...

Sta,—Rabbi S. Warshaw's letter on February 26 re- quired,. quite

another kind of answer from that Printed last week. Whether official Vatican opinion thought it betteropolicy to suppress or to ignore the Projeeted performance of The...

figure of the British Unionist majority th Northern Ireland presented by Sir Knox Cun- ningham, MP, must be seen against this political b ackground:. (I) gerrymandered electoral...

Black, Brown and Beige By HUMPHREY LYTTELTON I F a Duke Ellington concert tour is nowadays fairly predictable, then so too are the reactions to it. Among the critics, the...

SIR,—Your correspondent S. Percival objects to the use of 'alright' for 'all right.' Regrettable though it may seem, the Shorter Oxford Dictionary (1959 edition) acknowledges...

SIR,—Lookin g as I do to the Spectator for enlight- ened

Tory views, I am much shocked by Quoodle's attitude to the Government's polity regarding cigarette advertising on television. Television advertising clearly reaches a much more...

Professor J. W. Egerer's Biblio- graphy of Robert Burns in a parenthesis of six words (excluding the author's name and title of book). For you to have allowed this considerable...

SIR,—Me, I enjoy an occasional smoke, in suitable surroundings. But I never care to smoke, or to smell other people's smoke, in, say, a library, a petrol station, a church, a...

Cacoyannis Zorba the Greek. (Canton, 'X' certificate.) H ow often a community is described through the eyes of a newcomer, an outsider: from Tom Brown's .Schooldays to...

Not So Gentle Craft E VEN a minor Elizabethan comedy like Dekker's has a spaciousness that our own tortured dramaturgy cannot approach. Though it is a no-nonsense, no-poetry...

Art and Science S EVERAL lifne6 last week BBC-1 approached what I take to be a serious subject. R. W. Reid's seventy - minute The Building of the Bomb was accompanied by...

Poor American Cousins OMPARISONS, even when called for, can be ‘,. / misleading. How tempting it is to compare Britain's Western Theatre Ballet, which gave a new ballet in...

By MARTIN SEYMOUR-SMITH W HAT is often called the poetic revolution in this century, in the public sense of how the vast majority of readers react to what they read, was...

ALAN Ross's North from Sicily is the sort of book that might easily, and mistakenly, get written off as mere luxury travel-verse; elegant, shrewd, casually knowledgeable, it...

• By A. ALVAREZ T HE Poles have a tradition of double-talk. It is an inheritance from a long history of in- vasion, division and political rape by hordes, Of greater or less...

• Goodbye Bretton Woods By NICHOLAS DAVENPORT I ET us now bury Bretton Woods and call another monetary conference—preferably in Paris where more good sense is being talked...

By LOTHBURY R OSS GROUP has been greedy for acqui- sitions as the £6 million brought in last Year by a rights issue was soon swallowed up, since there were still loans...

By CUSTOS T HE decline in the Treasury bill rate to 6.44 per cent suggests that a cut in Bank rate is round the corner, although it may have to wait until the budget. The...

Fun of the Fair

By MARY HOLLAND The human element live up to their parts with no direction at all. There are the tragi-comic vignettes caught in groups between the automatic dishwashers and...