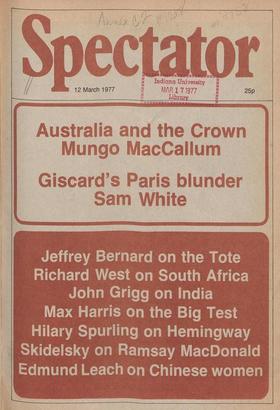 British Airways and Pan Am recently commissioned an i ndependent study of the North Atlantic air route. The system, once the chief profit centre of international aviation, had...

Countdown in India John Grigg March 1977 will be remembered, perhaps above all, as a month when 350 million people in the Indian subcontinent—the voters of India and...

The , New York Review' has published a h arrowing description of Andre Gelinas of life in Saigon under the Communist regime. Ho Chi Minh's successors have overlooked no classic...

The owl and the pussycat Auberon Waugh This week Mr Callaghan takes his clean, blue-eyed Foreign Secretary to Washington for a meeting with President Carter. Those few of us...

A mayor for Paris

Sam White Paris For France a Mayor of Paris has always been a bird of ill omen. That is why there have only been eight mayors in the history of the city, and each time the post...

Richard West Johannesburg To the rest of the world, South Africa is no laughing matter and yet this strange country, over the last fifteen years, has produced a comic figure...

William Wolff By the end of next week the man they call the most powerful man in Britain—the successor to Mr Jack Jones as general secretary of the Transport and General...

Profits and dividends The operating profit of Lloyds Bank Limited

Chaos at The Times

Dennis Hackett Fleet Street disputes have become so commonplace that they tend to be reported by the other media like the inevitable vagaries of the weather, though with less...

Two tales of a city

Taxation blues Nicholas Davenport Years before the war my old friend Colin Clark, then University Lecturer in Statistics at Cambridge, wrote that if the Government took away...

Leaf and seed Manka Hanbury Tenison If you have ever cooked authentic Indian food and enjoy such dishes as koftas, aubergine bharta, chana masaledar or the delicate chicken...

Gelding the Lillee Max Harris It was Mush's contention in The Man Without Qualities that staged moments of climactic triumph automatically generate the secret forces of...

Tote talk Jeffrey Bernard Just back from a lunch at the Savoy. Posh, aren't I ? Well, not really. I was asked to it by the Tote. To give it its proper title, the Horserace...

Mr Sproat and his charges

Sir: I read Mr lain Sproat's letter (5 March) with the weary feeling one has when reading the totally predictable. I am sure that your readers are not so naïve as to believe his...

Sir: Christopher Booker has written (5 March)with passion on what he considers to be the startlingcollapse of the modern move ment in all the arts, but his lamentable excursion...

Sir: The scene was 10 Downing Street. A visitor had arrived. He was greeted by a youngish lady. 'She nodded twice, smiling with a contented, contemplative expression, as though...

Sir: In his account of the legend of the Littlecote Ghost (One just man) on 5 March, Auberon Waugh said no one had ever suggested that Sir John Popham 'might be troubled in his...

Stunned by BBC Sir: I have noticed for some time

now that BBC play directors have become increasingly prone to the modern compulsion to add to their dramas a sprinkling of four-letter words as a sort of condiment and, for...

Sir: It does not commend the Spectator to those who have for many years respected its contributions to read Patrick Cosgrave's 'Suffering and little children' article in your...

Innes the reviewer Nick Totton disparage s surely for quite wrong reasons the work of Rider Haggard with whom he compare s Innes. He writes (19 February) that the Africa of...

Robert Skid elsky Ramsay MacDonald David Marquand (Jonathan Cape £12.50) Riography is in a bad way. It no longer provides a generally acceptable method of i nvestigating the...

Hilary Spurling How It Was Mary Welsh Hemingway (Weidenfeld and Nicolson £6.95) Edmund() Desnoes, in his sad and delicately equivocal novel Ineonsolabk Men tories, describes a...

Edmund Leach About Chinese Women Julia Kristeva (Marion Boyars . £5.95) We all of us need to have concrete images for our fantasies of heaven and hell, and ever since Marco...

Duncan Fallowell The Marquis de Sade Donald Thomas (Weidenfeld and Nicolson £5.95) Here is the Divine Marquis cutting round for the umpteenth time and, as if aware that none of...

The street furniture fiasco Alastair Best One of the more off-beat entertainments in store for Londoners this Silver Jubilee Year will be a display of bollards, lamp posts,...

Rising Stock Ted Whitehead Devil's Island (Royal Court) A Thought in Three Parts (ICA) °lie of the best things to come out of the Royal Court in recent years is the Joint Stock...

Just folks John McEwen Inflation and lack of museum space in London have reduced imported shows of work by living artists to a minimum, so it is a relief to find an Agnes...

Fringe benefits Rodney Milnes Once more the annual University Opera explosion has brought fall-out of pleasure and instruction in equal parts. Pleasure comes from the sheer...

Busy music Richard Ingrams -file turn of the century seems to be a favourite period with telly persons these d ,, a ys. Scarcely has the Duchess of Duke Street gone off the...