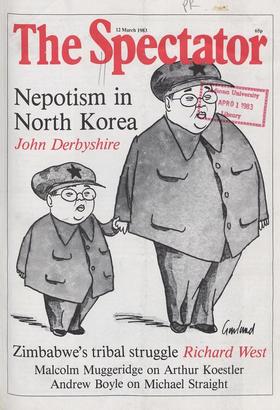 Calling their own bluff

L ast October members of the National Union of Mineworkers, asked to give their national executive committee the authority to call a strike against pit closures and to reject...

A plague on the economists Colin Welch T he Russian anarchist Bakunin, so I have heard, was travelling through Germany in a coach. He saw peasants burning an im- posing...

In a recent issue of the American magazine Harper's Norman Podhoretz took seven pages to explain why he thought that George Orwell, were he alive today, would not be a supporter...

Prisoner of the Vatican Auberon Waugh I t is nearly a year since Monsignor Emmanuel Milingo, Catholic Arch- bishop of Lusaka, was summoned to the Vatican to explain his...

Timothy Garton Ash Bonn S o the economy decided this election after all. According to the pollsters, German voters' top three priorities were unemployment, the national debt,...

Fall of a down-under Tory

David Butler `Uor years they've lived by tactics and l'now they've died of them.' Campbell- Bannerman's verdict on the Conservatives' debacle in 1906 could be applied to the...

Richard West Harare T he outside world is no doubt sated with shock reports from Zimbabwe: most recently, of Joshua Nkomo's depar- ture to Botswana; of government troops on...

John Derbyshire Pyongyang T f the quickest way to get some insight into a phenomenon is to look at its most extreme manifestations, the student of modern totalitarianism can do...

Nicholas von Hoffman Washington A Hamlet found out when he picked up Yorick's skull from the ground, bodies buried in shallow graves will yield up their old bones. After so...

J. R. Pole E very American President makes his pre- decessor look good. This observation has held its own, with some qualifications, since the death of Franklin Roosevelt; not...

Interlopers in the Gulf

Ronald Payne Matrah, Oman O man is the most felix of Arabian states, sandwiched between the sands of the desert and the waters of the Indian Ocean. Qabous, the last Sultan in...

The image of the hawk

Andrew Joynes T n a field on the edge of Salisbury Plain, the wind comes from the north- east, skimming an extra chill across the Hampshire/Wiltshire border. A teenage boy...

On Monday, the case against the editor, proprietor, and publishers of the Freethinker, for a blasphemous libel — a case which failed last week in conse- quence of the...

Malcolm Muggeridge T hough Arthur Koestler's suicide, along with his wife's, was entirely in keeping with his way of looking at life and death, it still gave me a sharp pang,...

Mac the Knife Paul Johnson `C cargill Losing His Grip', headlined L./the Daily Express. That seemed the general verdict as the miners' leader blundered about in his latest...

Sir: Nicolas Walter complains (5 March): 'I have been a fairly indefatigable writer of ,letter s to editors (since about 1948) but I have never achieved a rate of publication...

Sir: Why all the puzzlement about tie-rings? They were common

enough a century ago. I have two which belonged to arty grand- father: he was born in 1860 and died aged 93 , by which time he had reverted to the fashions of his youth, and...

Sir: Geoffrey Wheatcroft states (5 March) that the Bermondsey by-election result is a significant gain for the Liberals in that it is the first time that they have won a solid...

Sir: I would have thought that anyone wearing a tie

ring in a gentlemen's club deserves to have it stolen. Is Peregrine Worsthorne (26 February) sure that his friend wasn't at the Garrick? Michael Whitehall Turf Club, London SWI

cle (5 February) but none of the examples he gave of novelists' use of colour can com- pare with an extract from the second chapter of Charles Reade's The Cloister and the...

Sir: Whoever drew the 'Portrait of the week' for your issue of 5 March made the mistake of ascribing the Nobel Prize for Literature to Jorge Luis Borges. Would that it were so!...

Sir: Having been commissioned by Seeker and Warburg to write the life of the French cineast Jacques Tati, I would be grateful in- deed to hear from any of your readers who may...

Suh: I have just seen that damn Yankee Nicholas von Hoffman's scandalous re- write of history in his Spectator article for 26 February. He has the crust, the immortal rind, to...

Sir: Nigel Sitwell contends (26 February) that carbon dioxide from conventional fuels will in time inevitably cause tidal waves to sweep inland. He suggests that we might defer...

Andrew Boyle After Long Silence Michael Straight (Collins £11.95) T he pretentious title seems to give the show away. The author of this weird book should have been a little...

The snarling meanness of Ezra Pound

Alastair Forbes The Mad Mosaic Gael Elton Mayo (Quartet £9.95) w hen, not long after the end of the war, Robin Fedden started to tell me of his delight in the company of the...

In next week's Spectator, J. Enoch Powell will write about

the Attlee Government in India. John Gross will review Parviz Radji's Diaries. And among other Spring Books there will be accounts of Frank Harris's correspondence with Bernard...

Francis King Pilgermann Russell Hoban (Cape £7.95) A lthough the events of this novel are set back in the years 1096 to 1095 and culminate in the taking of Jerusalem by the...

Ham-handed Peter Ackroyd The Missionary ('IS', selected cinemas) 'Et must have seemed a good idea at the I time — the notion of an innocent young clergyman starting a mission...

Brainwashed Maureen Owen T have little patience with those who sit I round moaning about the poor quality of television programmes when there is nearly always something of...

Geoffrey Wheatcroft S ometimes an artist makes a brilliant splash very youn g and then passes into obscurity. Sir William Walton was not like that ; he was no Rimbaud. Nor was...

Remarkable Rodney Milnes Carmen (Covent Garden) Y ou don't need to be a critic to see what s wron g with Covent Garden's revival of Carmen. The sets are amon g st the...

Night and day John McEwen A ger Jorn (1914 — 1973) is the most internationally renowned Danish artist since Thorwaldsen, the neoclassic sculptor. A Painter, Jorn tends to be...

Quite frankly Richard Ingrains T he only interesting pro g ramme on the air at the moment is the BBC series Time with Betjeman. I only wish it had been done better. The idea...

Tall story Taki Gstaad T here are more Mercedes, Golf OTIs, and four-door Range Rovers in Gstaad than in Beverly Hills. This is the bad news. The good news is that the people...

Agonies P. J. Kavanagh R ecently I gave the sermon in the chapel of a public school. It was crazy to ac- cept the invitation but it arrived six months ago and I find it...

No. 1260: Ending supplied Set by Jaspistos: You are invited to write an unserious poem (maximum 16 lines) ending with the famous last words of a poem by Wordsworth: 'Oh, The...

Jaspistos reports: Competitors were invited to rewrite 16 lines of Shakespearian verse, substituting colloquial words or phrases for those in the text where they pleased. First...

Tarrasch lives Raymond Keene Alexander Beliaysky is noted for his . i.ferocious efficiency as an exponent of I e 4 . Witness, for example, his brilliant demolition of Bent...

Th e unclued lights. . . by Mass A prize of ten pounds will be awarded for the first correct solution Opened on 28 March. Entries to: Crossword 598, The Spectator, 56 Doughty...

D eports from the coalfields, before the .M.result of the ballot was known, sug- gested that Miners' Union president Arthur Scargill had again failed to persuade his members to...