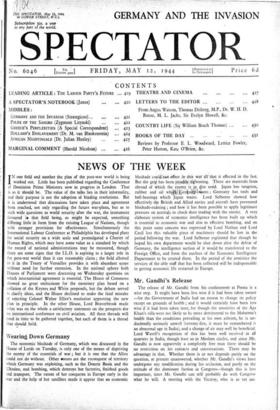 world is being worked out. Little has been published regarding the Conference of Dominion Prime Ministers now in progress in London. That NEWS OF THE WEEK is as it should be....

Mr. Gandhi's Release The release of Mr. Gandhi from his

confinement at Poona is a wise step. It might have been less wise if it had been taken sooner —for the Government of India had no reason to change its policy except on grounds...

The economic blockade of Germany, which was discussed in the House of Lords on Tuesday, is only one of the means of depriving the enemy of the essentials of war ; but it is one...

Mr. Churchill announced on Tuesday that the Government pro- posed to set up a Royal Commission to consider the question of equal pay for men and women for equal work. This is a...

The Bill Against Germany

The Government has taken a wise step in appointing a Com- mittee, under Lord Macmillan's chairmanship, to advise on measures for securing the restitution of works of art,...

A General Election in Eire

In consequence of a defeat of the Government of Eire in the Dail by one vote-64 to 63—on the second reading of the Transport Bill, Mr. de Valera has decided to appeal to the...

The Government of Secondary Schools

Mr. Butler has not neglected to consult the various interests con- cerned in' education on a matter which has caused a good deal of misgiving—the degree of freedom which will be...

Mr. Hudson and Milk Milk seems in some danger of

being spilt between rival authorities. Mr. Hudson is to bring in a Bill giving the Ministry of Agriculture responsibility for supervising the conditions of milk production...

A GOOD deal may happen between now and the meeting of the Labour Party Conference at Whitsun to divert attention from internal politics. But at the present moment there is...

I N stating in the House of' Lords on Tuesday that the Foreign Secretary had decided to create an Economic Intelligence Depart- ment of the Foreign Office, and implying that it...

GERMANY AND THE INVASION

By STRATEGICUS T HE German High Command are daily expecting the opening of what it is customary to call the " Second Front." As far as their outlook can be read in the...

POLES OF THE SANGRO

By ZYGMUNT LITYNSKI reference to the sufferings of the Poles in Russia. For what are we fighting? Is it to sink lower than we were, or for a better future? A better future is...

By A SPECIAL CORRESPONDENT T HE Conference between the Royal Hellenic Government and representatives from the Greek guerillas was due to start last week in the Middle East. It...

By M. VAN BLANKENSTEIN Y EAR after year the commemoration of May Toth, the date of the German invasion of the Netherlands, has been a day of sad memory. This year that day has...

By JULIAN HUXLEY O N my first English Sunday after three months in West Africa I heard the Surrey nightingales in full song. Listening to them, my thoughts went back to the...

By HAROLD NICOLSON I T is a strange experience to visit Tunis a year, almost to the very day, after the British armies delivered that city from the Germans. The aeroplane which...

" Fanny by Gaslight." At the Gaumont and Marble Arch Pavilion. The Impostor." At the Leicester Square Theatre.— "Higher and Higher." At the London Pavilion. I HAVE not read...

(From a cycle of poems entitled "Spring in Leningrad.") THERE, where the Neva's by grey granite overhung, morosely manacled to shore there stand like to two songs, unfinished...

iiovv Are They at Home?" At the Apollo.

THE THEATRE MR. J. B. PRIESTLEY'S new comedy is written, he informs us, especially for the Forces overseas " as an answer to the question most frequently asked by men serving...

SIR, —I am sorry that " Janus " seems to have listened only to those in- formants who have been busily spreading the suggestion that allegations of anti-Semitism in the Polish...

Snt,—In your issue of April 28th, in his article on Mr. de Valera, Viscount Castlereagh referred to the inhabitants of Northern Ireland as "Ulster Scots," which I take leave to...

SIR,—Mr. Keachie's letter in your issue of April 28th is,

I think, more alarming than reassuring if his point of view is at all shared by the managers of our engineering industries, whose apprenticeship schemes he describes with such...

SIR, —Mr. Harold Nicolson's article on this subject raises a number of interesting questions, some of which are unanswerable, but the common mistake of Englishmen in thinking of...

Six,—A learned article by Mr. E. J. Cohn in the last two issues of the Law Quarterly Review raises again the question of adequate provision of legal aid for persons of 'modest...

Sut,—In his article under this heading in your issue for

April 28th Viscount Castlereagh seems to assume Northern Ireland to be "an integral portion of Great Britain." We would be glad to know how he explains the absence of...

Sta,In your comments on the irregularities which have been revealed on the work of the Newcastle-on-Tyne City Council you refer to a slackness in the Council's administration...

FINDING THE TEACHER; Sta,—You comment on the light way the

Government caper about. Sixty thousand new teachers wanted next year—and you ask what provision is made? None: on the contrary, all students are shut out of the universities...

am sorry that some of your readers are indignant about

what I said of the knowledge of Latin in Scotland. But I also said there were a few exceptions ; and I admit that Timor mortis conturbat me of Dunbar's Lament could hardly be...

Sul,--Did Mr. Howard's schoolboy learn from his Italian prisoner how It make a basket our of the bramble Oct that is what the word rubea means)? This is a problem which has...

SIR, —In The Spectator of April 28th you publish a letter from a correspondent containing a quotation from Book I of Vergil's Georgics. Vergil recommends basket-making as an...

SIR, —It may be that John Leech (f1. 162o) would suppoit Mr. Gilchrist in the view that Scottish scholars did not get all their latinity " in Scotland ": Scotus ubique later,...

SIR,—I see that the Rev. W. E. Wynne ventures the

opinion that "without Latin and Greek no European is educated." I would also venture the opinion that this is quite an out-moded concept belonging to the eighteenth century: In...

Ir is a proverbial creed that April showers make May flowers ; but after one of the least showery of remembered Aprils, May flowers have opened in more than normal profusion....

RESTITUTION SIR, —It is to be feared that the doctrine that

no restitution can be made to the victor by the vanquished is already accepted in certain quarters as axiomatic. It would be interesting to hear openly declared what objection...

THE UNHARVESTED THAMES SIR,—Re above in The Spectator of April

list, I would like to say that the British Government took over the elver fishing station at Epney on the Severn four years ago, and quantities of elvers have been supplied to...

Sta,—The question raised in your columns about " the directing of labour into domestic service after the war " touches upon the whole outlook of the future life in England. Men...

Angry Common Sense THE thesis of Mr. Wells's book is (a) " that the world is now one, (b) that there has been so enormous a release of mechanical power in the world that only a...

THIS book sets out to do two things: to show that power corrupts and to trace the rise of tyranny since Rousseau's diversion of man', thoughts from God to himself. These two...

The Land of Cricket

Cricket Country. By Edmund Blunden. (Collins. 8s. 6d.) Boors published in wartime tend to divide themselves into two classes, war books and nostalgic books. This boOk is in the...

Shorter Notices To write a book of a few thousand

words on wild flowers in Britain and to be both original and informative cannot be an easy task ; and in so far as Mr. Grigson succeeds, it is because the poet in him prevents...

The Eighth Army. (H.M. Stationery Office. Is.) ONE expects much

from a book with this title. Yet after reading it a certain amount of disappointment is felt. The photographs are good and well reproduced and the diagrammatic maps are dear and...

THIS is the complementary volume to Mr. de la Mare's

recent Collected Poems, and comprises his poems, originally intended f3r children omitted in that volume, and contains all the poems puffs listed separately as Peacock Pie,...

for one guinea will be awarded to the sender of the first correct !elution of this week's crossword to be opened after noon on Tuesday week, Muy 2 3 rd. Envelopes should be...

CROSSWORD No. 268 SOLUTION TO SOLUTION ON MAY 26th.

By CUSTOS THOSE market observers who have upheld the view that the rise in security priCes has not yet exhausted itself find strong support in the course of events since Sir...

Worship and the Common Life. By Eric Heyman, M.A. (Cambridge

University Press. 7s. 6d.) THE need for the integration of religion and life, of the devotional attitude as expressed in worship with the ethical as expanding into social action...