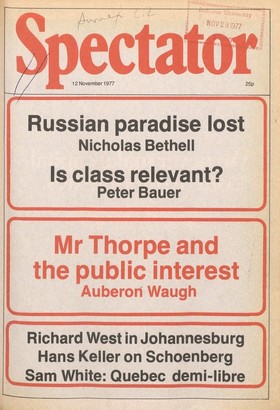 If Mr Alex Kitson's incautious remarks to Pravda served no other purpose, they would be a salutary reminder — not so much of the present state of the Labour Party's National...

The Flying Scots Ferdinand Mount Whoosh! Och aye! Zowee! Hoots! Vrrrm! The one streak of lightning upon the drear November is the Scotland Bill. If the Government has its way,...

'November is the month when you either get on top of your garden or you get behind for the whole year', said the Radio Gardener, so With one third of the month gone and no...

Thorpe and the 'Sunday Times' Auberon Waugh now know what arrangements the Sunday Times made with Mr Thorpe over the copyright in his letters to Norman Scott. Several...

Sam White Paris It is ironic that a speech made ten years ago by General de Gaulle which marked the beginning of his political decline should now have as a consequence the...

Nicholas von Hoffman Washington The spigot has been turned on and the mass media, which gave short and perfunctory attention to the shooting-down of black school children in...

Nicholas Bethell I know that this is Jubilee Year, but Alex Kitson's speech, with its cries of 'Long live the October Revolution' and 'Long live the Soviet trade unions', was...

The irrelevance of class

Peter Bauer 'As long as you maintain that damned class-ridden society of yours, you will never get out of your mess,' said Herr Schmidt, the West German Chancellor, as reported...

Breakthrough for the Trots?

Jim Higgins The revolutionary Left in Britain, or elsewhere for that matter, is like other religions — secular or spiritual — supremely logical in its development once the...

Parties against the people

Edward Pearce A fallacy is haunting politics, the fallacy that the present government has a real chance of being re-elected. The notion of Labour as the 'new party of...

A hell for homosexuals

Max Harris Bali Bali is a paradisical island that lives up to every Hollywood cliché. Both the people and the island offer an almost painful ravishment of the senses. Bali is...

Oh, to be in England Taki Upon choosing to live under a trade union dictatorship rather than languishing in a Greek gaol (it was an agonising decision) I decided to pose as an...

Sir: Ferdinand Mount is entitled to believe (29 October), if he wishes, that Sir Harold Wilson has shown unwavering loyalty to Jeremy Thorpe because it happens to fit in with...

Sir: Richard Ingrams (5 November) challenges the point made by Elie Wiesel in the Long Search programme on The Chosen People (31 October) — and quoted in Ronald Eyre's article...

Sir: Not long ago (8 October) you published a letter from a Dr Templeton-Wade claiming cancer specialist Dr Virginia Livingston as an opponent of laetrile therapy. In fact, she...

Sir: In trying to apply to the case of Corporal Booth, von Mises' warning against allowing government to protect us from our own foolishness, Geoffrey Wheatcroft (5 November)...

Sir: I would like to remind Nicholas Davenport that at the time of the Heath-Barber 'boom', for which we have all had to pay so dearly, he had a bet with a colleague that the FT...

Radical Joe and logical Enoch Robert Skidelsky Joseph Chamberlain Enoch Powell (Thames and Hudson £4.95) It was an intriguing idea to get Enoch Powell to write about Joseph...

The aesthete as hero

Christopher Boolcer The Other Half Kenneth Clark (John Murray £6.50) Seven years ago, I wrote a longish article in these columns about Kenneth Clark's Civilisation. Over the...

Benny Green Halliwell's Filmgoer's Companion; 6th Edition (Granada £10.00) Mr Halliwell must surely have qualified by now for the status of what is known in the trade as a...

Classicist John McEwen Peter Startup died at the age of fifty-four in 1976 and now, fittingly, there is a memorial exhibition of his sculpture at the Serpentine (till 20...

Spruced up Richard Ingrams It amazes me to say so but Tonight has improved out of all recognition. It is still on at the same God-forsaken hour of the night, With the result...

Just the one Jeffrey Bernard A quiet word with you about drinking. The day Mr David Ennals, the Social Services Secretary, got it into his head to tell us that it was about...