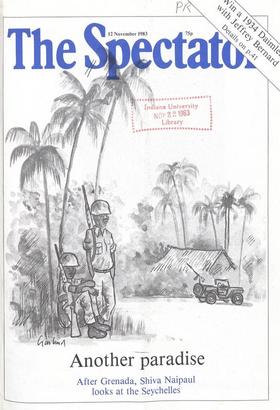 U nesco's first General Conference for three years, which began a five-week session in Paris on 26 October, has not yet exactly caught the imagination of newspaper editors. So...

Showing the reality Charles Moore T eaving aside, for the moment, the rights Land wrongs of the question, how is it that Mr Austin Mitchell managed to muster 164 MPs ready to...

M y rebukes to the newspapers of Fleet Street for their failure to discuss the ethical and legal issues raised by the propos- ed flotation of Reuters news agency are no longer...

Bitter pill Auberon Waugh A n advertisement in last week's Spectator jolted my conscience by reminding me of the existence of a Catholic weekly, the Tablet, which I had...

Islands in the sun

Shiva Naipaul T hrough a grey half-light I had my first glimpse of the islands, disposed like dreams in a grey sea. The aircraft's ultimate destination was the rounded volcanic...

Christopher Hitchens Washington I n 1895 Richard Olney, who was Secretary of State to President Grover Cleveland, delivered himself of the following blunt observation: 'The...

Could Israel save Arafat?

David Lay W hen PLO dissidents raised a rebel banner in the Beka's Valley of eastern Lebanon, who could have predicted that within six months, rival Palestinian forces would...

Tony Allen-Mills Buenos Aires H erminio Iglesias is a man you would knot care to meet in Hyde Park on a dark night. He has a glass eye, an ugly, pock-marked face, and the...

Roy Kerridge S urrounded by the Sussex Downs, which press against its ancient streets like glaciers, Lewes, the county town of East Sussex, proudly dreams the year away from...

A. N. Wilson T he announcement of a Roman pontiff's election is made from a Vatican balcony by a cardinal proclaiming: Annun- vobis gaudeam magnolia: habemus Papam. Robert...

The Oxford memorial concerning the physiological laboratory, which asks, we believe, that no experiments on living animals shall be made in the new Oxford laboratory except...

Olivia O'Leary Dublin I f anyone wants to know why the prime ministers of Britain and Ireland should have had to spend so much time at Che- quers this week 'normalising...

Cassandras clutch at straws Jock Bruce-Gardyne W hat is this we hear? Could it be the sound of straws being snatched at? Last weekend Mr William Keegan of the Observer...

Sir: As the Festive Season approaches it is pleasing to see Paul Johnson skating by on one of his own banana skins. Criticizing Harold Evans last week, he wisely observes that...

Sir: Nicholas Mosley may be interested in my own reaction to his father on his release from prison in November 1943 when, as cub reporter on the Oxford Mail, I was the only...

Sir: Must we suffer any more silly letters and comments about streets and places named after Nelson Mandela? That he is a giant among men is clear to anyone who has read his...

Holding heavy water Sir: Well yes, it is true that the theory of nuclear deterrence now appears to hold more (heavy?) water than it did to some of us, like Geoffrey Strickland...

Sir: It is uphill work satisfying reviewers, particularly those who wish one had written the book they never quite got round to writing themselves. John Stewart Collis (1...

Sir: I have found of much interest Murray Sayle's recent articles regarding the tensions in the Far East and the destruction of the Korean KAL 007. It seems unlikely that the...

The constituency of the dead Colin Welch D o, you remember when 11 November was truly Remembrance Day? How, at the muffled thunder of a gun, our whole nation would, even on a...

Kathy O'Shaughnessy Life as a Party Tina Brown (Andre Deutsch £6.95) T att-lere, as a Paris Match photographer called it, is the magazine Tina Brown brought to brilliant and...

Anthony Mockler The Emperor: Downfall of an Autocrat Ryszard Kapuscinski (Quartet £7.95) This is an extraordinarily clever, rather I disgraceful book. But the criticisms of the...

Christopher Hawtree Cold Heaven Brian Moore (Jonathan Cape £7.95) have no wish to expedite communi- cation with the Americans. If we could apply the power of electrical repul-...

Lip reading Peter Ackroyd Exposed ('15', selected cinemas) T he director of this film, James Toback, has become a legend in those quarters where torrid failure is considered...

Half-cock John McEwen Albert, His Life and Work (Royal College of Art, till 22 January 1984) T here is no commemorative reason for this exhibition. The Duke of Edinburgh went...

Road to ruin Richard Ingrams T cannot claim to have been an afficion- 1 ado of the old Nationwide on BBC 1. But on the few occasions when I did watch it, it seemed to be a...

Ups and downs Jeffrey Bernard T he flat racing season ended last Saturday, Christmas looms and through the letterbox this morning I got a handout about an artist from Hong...

Autumn journal P. J. Kavanagh F rom time to time I feel impelled to report what the weather has been doing. Whether these communiqués bore more people than they amuse it is...

Jaspistos reports: Competitors were asked for a sense-making poem containing as many anagrams as possible of a nine-letter word. I am very sensible of the time and effort that...

No. 1295: 1984 Set by Jaspistos: A future government has banned by law the use of the private motor- car and/or the consumption of alcoholic beverages. You are invited to...

A prize of ten pounds will be awarded for the first correct solution opened on 28 November. Entries to: Crossword 633, The Spectator, 56 Doughty Street, London WC1N 211. 7 8...

Guessing game Raymond Keene Phis week I introduce a special Chequers .I. Competition which will run for six con- secutive weeks. The prize is £500 and the winner will be...

'in an imitation of previous devastating attacks on the headquarters of the American and French contingents of the Lebanese peacekeeping force, a lorry packed with explosives...

with Dame Edna Everage Hello Possums! Edna, according to a funny old book we found when we were burning my mother's things, is a name which means 'Compassion'. It's certainly...