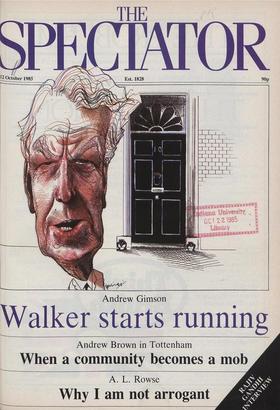 P alestinian pirates captured the Achille Lauro, an Italian liner bound from Alexan- dra to Port Said, taking hostage the 454 people aboard and threatening to blow up the ship...

UNITING FOR ORDER A long period of order in Britain has led us to forget a simple and important fact — people like killing one another. This pleasure in killing is spread...

The embarrassing qualities of Jeffrey Archer FERDINAND MOUNT hings do not look too good at the moment. As John Evelyn wrote in his diary one such autumn: 'Horrible roberys,...

RICHARD INGRAMS I should be very surprised if the IRA make a second attempt to blow up Mrs Thatcher this week. Whatever comedians may say, the Irish are not stupid. It is more...

Joking along with the Sunday Times: Mr Freeman's plaint — 2 AUBERON WAUGH A ll Fleet Street has been laughing for a fortnight over the excellently successful practical joke...

On past form Mr Walker will undoubtedly, when Mrs Thatcher falters, present himself as her most eligible successor. By Andrew Gimson THOSE Tories, and they are numerous, who...

THE SURVIVAL OF ARAFAT

Rowlinson Carter discovers the Tunisians' outrage, and an Englishman's bed Tunis INTENSE pressure by the United States, including the hurried personal intervention of Vice...

'The French,' said the late Mr Bage- hot, talking to a journalist, 'the French you have always with you.' The French Elections of Sunday were expected to be dull, but they have...

RAJIV AND THE EMERGENCY

Rajiv Gandhi speaks for the first time about his mother's Emergency. By Dhiren Bhagat Bombay THE twenty-fifth of June this year, the tenth anniversary of the imposition of Mrs...

Game of Consequences Next week sees the launch of another devilishly difficult Spec- tator competition. You will need all your wits to solve the literary, his- torical and...

THE MAKING OF A MOB

Andrew Brown on the effects of different leaders on a riot-torn community Tottenham AFTER a car has been completely burnt out, nothing remains around the wheels but a dozen...

A CULTURE IN CRISIS

Gavin Stamp compares present immigrants unfavourably with the Huguenots THERE is still time to visit an exhibition at the Museum of London which has been running all summer...

A. L. Rowse explains why one ought to have a good conceit of oneself SINCE I am supposed to be an authority on arrogance, I have been invited to elaborate on the theme. The...

BBC DOWN THE PLUGHOLE

the BBC's selective view of what is and is not an advertisement THE BBC's attitude to advertising becomes more and more peculiar. It has always taken a snobbish line on this...

Was Mr Lawson right to stay at home? JOCK BRUCE-GARDYNE D enis Healey, I was told last week by one of the expert observers of the theatre of politics, would this week be in...

BEFORE Ian MacGregor pulled the plas- tic bag over his face, but after it became clear that a green baize cloth might have been better, I was musing in this column (July 14,...

The wages of fear

MARKETS, so we learned at Sir Patrick Sergeant's knee, are ruled by greed and fear. Greed fosters financial disasters: fear brings them into the open. How salutary, then, to...

If Norman can't slay the Serps, Nigel must give us the Pips CHRISTOPHER FILDES W e have scotched the Serps, not killed it. The Macbeths had the same trouble, and look what...

LORD Forte takes issue with the Savoy Hotel directors over their claim (City and Suburban, September 7) that Trusthouse Forte had shown itself a willing buyer of Savoy shares at...

Sir: May I at this late date be permitted to comment on the controversy aroused by Antony Lambton's recent inauguration (Books, 7 September) of a new and idiosyncratic style of...

Sir: Alexander Chancellor's comments on David Owen's big bottom (Television, 14 September), prompt me to reveal research of my own. Recent visits to the Palace of Westminster...

Sir: As a long-time subscriber to the Spectator, I find myself more and more in tune with the thinking of your contribu- tors, especially Richard Ingrams. Could it be that we...

LETTERS Social workers in the way

Sir: John Ralston Saul's piece (5 October) on the French malaise was excellent. If he has not already done so, I think he should read Pure War, a dialogue between Paul Virilio...

Sir: Mr Kingsley Amis in his review of the dedication and acknowledgments to my book, Hummingbirds and Hyenas, strays briefly into the text to be affronted by my opinion of the...

Wish-dreams of the Webbs Colin Welch THE DIARY OF BEATRICE WEBB, VOL 4, 1924-1943: THE WHEEL OF LIFE edited by Norman and Jeanne MacKenzie R eviews of earlier volumes of these...

Alastair Forbes THE FRINGES OF POWER: DOWNING STREET DIARIES 1939-1955 by John Colville Hodder & Stoughton, f14.95 I n one of the baker's half-dozen of the books already to...

More or less Greek to her

Francis King LAST LETTERS FROM HAV by Jan Morris Viking, £8.95 T his spoof travel book by one of the best of living travel-writers is certain to divide readers into Hays and...

Richard Cobb RED HERRINGS: A SIMON BOGNOR MYSTERY by Tim Heald Macmillan, £7.50 N o doubt all this has something to do with 'baying been born and educated in Dorset', a...

In the teeth of defeat

Pale Rider (`15', selected cinemas) Way back West Peter Ackroyd I t is difficult to admire Clint Eastwood: the strong silent manner seems only to camouflage a ham actor, and...

A joyful occasion Rodney Milnes I seem to remember writing something pompous and condescending earlier this year about Opera North coming of age with their (rather poor)...

Drug deals Taki turned on the television last Friday evening in order to watch the news and I got a bit of a shock. There was Anthony Haden-Guest giving a press conference of...

Eating out Jeffrey Bernard Well, the race itself was quite extra- ordinary. When the French favourite, Sagace, was beaten the crowd really erupted. They are not very good...

Raving loonies Alice Thomas Ellis T here seems to be a lot of madness around at the moment. The streets of Camden Town are filled with people seeing visions, many of them...

In honour of J. Doyle P. J. Kavanagh Now America has become interested in its Past. Late in the day, when so much has already been swept away, but Preserva- tionists...

Cycling Raymond Keene I am sorry to see that both Nigel Short (on the weekly BBC 2 chess report) and John Nunn (in the British Chess Magazine) have recently been attacking the...

Revised version Jaspistos I n Competition No. 1390 you were in- vited to expand and retell a nursery rhyme in your own poetic manner, supplying a surprise untraditional...

THE prix-fixe menu is here to stay. More and more

restaurants now are abandoning any form of a la carte list altogether. A few, like the Cherwell Boathouse in Oxford, Clarke's in Kensington High Street, go as far as a...

In A Feminist Dictionary (to be published this month) this odd word is defined as '1. The past as seen through the eyes of women. 2. The removal of male self- glorification from...