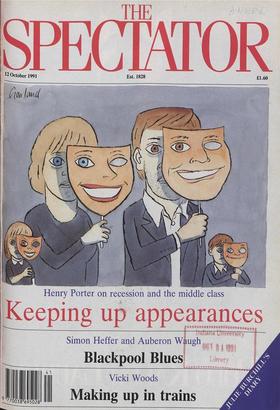 `The kiddy was all right when I last looked at him — he must have fallen down the stairs playing.' S it Alan Green, QC, Director of Public Prosecutions, resigned after police...

The Conservative Party wants to be led: but first Mr Major must hoist the colours SIMON HEFFER espite the claims of omniscient pun- dits, it is not always easy to judge the...

I get a letter from Debrett's, asking me if I want to be in their book People Of Today. When I boast about it to my best friend, who's in the proper one, (People Of Yester- day,...

Among the neater, sweeter maidens in a cleaner, greener land AUBERON WAUGH I wish him better luck this week, but quite possibly the Tories will be too busy asking themselves...

Henry Porter reveals how the middle classes have coped with their sudden impoverishment A FEW months ago my wife sat next to a Conservative MP at dinner. I could not hear what...

next Secretary-General of the UN is more impressive than the incumbent IN THE warm Asian night the crickets sang and the carpets, laid out on the lawn by the swimming-pool,...

THE Times of Thursday gives a detailed account of the rain-making experiments lately tried in Texas, near the town of Midland. The experiments, which were conducted by a...

SIGNING ON THE DOTTY LINE

Christopher Monckton reveals what the draft treaty on European political and monetary union actually says NO, said the Press Office of the European Communities in London, I...

TO MOCK the bourgeois virtues is, of course, a bourgeois privilege and pas- time, and we do it not because the virtues are not virtuous, but to demonstrate to the world our...

HAVE THE TORIES CUT TAXES?

Andrew Dilnot argues that, after 12 years in office, the Conservatives have increased the tax burden WHEN IS a change from 34.75 to 37.75 not an increase? When a Conservative...

Vicki Woods describes an experience on a train that left her a liberated woman WHEN Germaine Greer published her book The Female Eunuch in 1970, it was grist to the earnest...

Pugilism again — this time of the literary sort PAUL JOHNSON T here is nothing I enjoy more than a lit- erary row, and for this reason alone I applaud Nicholas Mosley's...

NOW his successor tells Aerospace's share- holders that Rover is eating the company's cash, but that it has bright prospects in nuz- zling up to Honda. What he means is that he...

MAKE the taxman subscribe to your chari- ties — here's how. You open an account with the Charities Aid Foundation, which sends you a cheque-book. Use it for pay- ments to...

THE dog called Rover is biting the hand that feeds it, and Roland Smith, the dog- loving Prof, must rue the day he gave it kennel-room at British Aerospace. He can't say I...

First stop Blackpool, next stop Bangkok, with a detour through Lombard Street CHRISTOPHER FILDES T his is the week when Norman Lamont has to fly to Bangkok via Blackpool. He...

SIXTY–FIVE of the plaintiffs in the Outh- waite case — Lloyd's latest outcrop of liti- gation — are already dead. More will have joined them before it is over. I do not pre-...

CHANNEL Tunnel trains will soon run through to North Pole International. Bri- tish Rail has put up a notice to say so. Has Sir Alastair Morton of Eurotunnel lost his bearings,...

Sir: Much has been made recently by the Labour Party and by the Sunday Times of donations to the Conservative Party by, inter alia, rich Chinese businessmen from Hong Kong. The...

Sir: Mr Fenton Bresler taxes me with call- ing the late Lord Goddard repulsive and the late David Maxwell Fyfe a mediocrity. (Justice for the judge', 5 October). They were...

Sir: Lady Longford appears to believe that it was a sledging accident that 'was fatal to [Princess Louise's] trust in her husband,' and M.R.D. Foot does not challenge this old...

Sir: Your issue of 14 September carried a letter from an A.L. Rowse wondering why Graham Greene et al had been so silly about politics. Presumably this isn't the same A.L....

Sir: I am working on the research for the official biography of David Lean, and would be immensely grateful for any mem- ories — or letters — your readers might have. I am...

Sir: Your correspondent asks (14 Septem- ber) why the Russians one sees queuing for food are so fat. The answer is because bread is plentiful and exceedingly cheap.I have a more...

Sir: I am sorry that Dominic Lawson, while poking fun at the Independent's obituaries, (Diary, 28 September) could not have found room to praise the Telegraph for its...

Suffering abominable relations Charles Moore WILL THIS DO? THE FIRST FIFTY YEARS OF AUBERON WAUGH, AN AUTOBIOGRAPHY Century, £15.99, pp. 288 R eviewing this book is rather...

Doing theology to the sound of church bells

Ravings of a drug-crazed Wykehamist

Ageing is an agony. Just white hairs, I'd thought; But now that teeth are falling out And hearing is a sort Of fought-off deafness, it seems nothing That my hair is white. And...

To say that it's sad to be old, That is indeed to betray Dodderiness, the dotard's whining Loss of the human way. For all men know their nature. We are not earth or sky, Nor...

Partial for the Observer's sake

Anthony Sampson DAVID ASTOR AND THE OBSERVER by Richard Cockett Deutsch, £17.99, pp.294 L ooking back from today's competitive and money-conscious journalism, it is hard to...

Smooth as a snail, this little parson pardons our sins. Touch the brushtip lightly and — abracadabra — a clean slate. We know those who boil their brains by sniffing it, which...

From the man who gave us Glam Rock

More than sugar and spice

Memoirs are made of this

Patrick Skene Catling A GIRL IN PARIS by Shusha Guppy Heinemann, £14.99, pp. 278 I f everyone, as they say, has a novel in them (an awful thought), think how full they must be...

Another good read from the slums

Wresting tragic grandeur from the ordinary

Francis King SCUM by Isaac Bashevis Singer Cape, £14.99, pp. 218 A writer shows his true worth when he takes some incident familiar from countless other novels and then makes...

Hidden Treasures (San Vitale, Ravenna, till 17 November) The glory that was Ravenna Roderick Conway Morris I t is as well Edward Gibbon was Hono- rius's chronicler and not...

Uranus (`15', selected cinemas) The hunting of the nark Harriet Waugh Monsieur Archambaud, the most interesting character in Uranus, points out, how is it that under...

Chart stoppers Marcus Berkmann T h e pop world has tasted turmoil this week after the much mooted upheaval in Top of the Pops' 28-year-old format. After years of steadily...

A dog's life Martyn Harris J ulie Burchill is a clever girl from a small town in the West Country. Her father was a factory worker and a Stalinist, as was Julie herself until...

The price of greatness Taki Berlin r ivingriving down Unter den Linden one can feel something of its former cosmopoli- tan elegance, but it is mostly an exercise in imagining...

In the club Zenga Longmore D ays seemed like months as I waited on tenterhooks for the re-opening of the One O'Clock Club, the social nerve centre of Brixton's mother and baby...

ST WILFRED, Archbishop of York, was one of the most illustrious prelates of the Anglo-Saxon Church. He was a monk of Lindisfarne and built many churches, notably those of York,...

B efore the great Christmas rush starts I thought I would have another look at the remarkable Montes series of Chilean wines which proved so popular last year, and at anything...

Winter of the patriarch Raymond Keene I must not let the year slip away without celebrating the 80th birthday (which was in fact 17 August) of the great patriarch of Soviet...

Some people thought the choice of Julie Burchill as last week's Spectator Diarist slightly surprising. You are asked to im- agine that our editor has invited an utterly...

Boycott heroes Frank Keating AS WALES were being pulverised by the breathtaking tackles of the Western Samoans at Cardiff Arms Park on Sunday, the wincing eyes of the mournful...

Q. Following our barbecue my wife and I received thank you notes from almost every one of our guests. The consequence is that if we are invited back by any of our friends we...