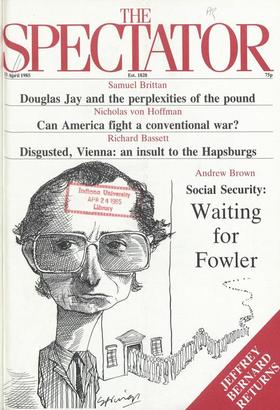 M rs Thatcher toured the Far East, and caused great offence to British trade unionists by saying in Malaysia that British labour relations were not nearly as bad as they had...

Finding a Tory leader Charles Moore T he newspapers say that there is 'press- ure' on Mrs Thatcher from 'some of her advisers' to bring forward her early autumn reshuffle...

T here is an interestin g se q uel to last week's Note about Somerset House and the Geor g ian Rout. The malicious' harassment of the Geor g ian Group by the public servants...

Tt seems it is no lon g er enou g h for 'political parties to use their patrona g e to g ive peera g es to their leadin g supporters – these appointees are now described as...

M r Gerald Kaufman as usual spoiled his case by exa gg eration when he described Mrs Thatcher's tour of the Far East as 'one of the most dis g raceful trips abroad ever made by...

C inn Fein's announcement that it is to L./contest only 80 of the 566 seats in Northern Ireland's local g overnment elec- tions next month is a reminder that it is much weaker...

Conservationist menace Auberon Waugh F or most of us, the 1960s ended 15 years ago, on 20 June 1970, with the emerg- ence of Mr Edward Heath and Mr Peter Walker at the...

I read in my New York Times that the disease Aids has inspired a wave of plays on the New York stage. There is, or has been, a choice between Robert Chesley's Nightsweat,...

Nicholas von Hoffman Washington 'Mot everyone in Washington has aban- doned terrestial concerns to biff and cudgel over 'Star Wars'. While the escapist controversy over a...

Geoffrey Wheatcroft Nairobi S omething new is always said to come from here, which isn't true. What is true is that the 'new Africa' means all that is least interesting about...

Charles Glass A pril is the cruellest month, breeding decennaries out of dead lands. Some memories will mix with desire better than others, when ageing press veterans of the...

The news of a grave, it may be a terrible, incident in Afghanistan, re- ceived on Thursday, rendered all other intelligence unimportant. It was announced from St Petersburg and...

. Richard Bassett Vienna F we things appeal more to today's Austrians than the idea that they are the relics of some lost order of chivalry. Kuss die Hand, Strauss waltzes and...

E arlier this month, the egghead PBS channel of American television screened an .hour-long programme about the history of US-Soviet relations. Nar- rated by the notorious...

Waiting for Fowler Andrew Brown E very hack whose name begins with 'W' has begun to discuss the failure of Thatcherism to inspire the British to work harder. Peregrine...

Jeremy Lewis A s I move at distressing speed through the outer suburbs of middle age, I find that — in certain walks of life at least --- I increasingly relish the local and...

Gossip and corruption Paul Johnson I t looks as though the bingo era in Fleet Street is over, at least for the time being, and that we are going to have another bout of using...

The Bank v. the Treasury Jock Bruce-Gardyne I t is a truth universally acknowledged that a cause espoused by the Treasury must be renounced by the Bank (and vice versa). And...

FRAMLINGTON Spectator readers who need the performance of a Framlington

unit trust should obtain a copy of our Unit Trust Guide 1985 without delay. Telephone 01-628 5181, or write to Framlington Unit Management Limited 3 London Wall Buildings, L I...

Winston will never realise that he is not Governor of the Bank. As regards Parlia- ment, W. is absolutely entitled to say that it has never been the practice of the Bank of...

uy now, pay later, is the second rule of tax management. The first rule is not to pay at all, but this can be more difficult. A new security with chances under both rules comes...

Hedgers, ditchers, brokers L et us reject the Budget, said Lord Milner, and damn the consequences. The consequence was the Parliament Bill, which would curtail the Lords'...

Think of a number

" - T hose of us who can remember every 1 number except the one we want — school boot-locker number, yes: S.G.War- burg's old telephone number, yes: War- burg's new number, not...

T he Treasury has a name for it: the Beggar's Sore. This is the technique used by the spending departments of state in their annual jousts for public money. Invited to put...

Correction A sentence in last week's City and Suburban was

misheard on the telephone, and should have read: 'Sterling would not be helped if, every time it perked up, we hit it over the head with a cut in interest rates.'

Sir: Your profile of Sir John Summerson (6 April) omitted to mention one notorious example of his mischievous perversity. Twenty years ago, the distinguished author of Georgian...

Sir: I refer to your article entitled 'Twenty years of Perth' by Roy Kerridge, which appeared in your recent Scottish issue (16 March). To state, as Mr Kerridge has done, that...

Sir: If a Nobel Prize were to be awarded for 'courage', then one of this year's contenders to join the ranks of Alexander, Hercules, Hector, Lysander and such great men as these...

Sir: I refer to Mr Blow's interesting article 'Racing with the Colonel' (23 March), in which he states that 0 Battery, RHA was known as the Rocket Troop because of its speed...

Sir: This American reader writes, not to disclaim Jeffrey Bernard's statement (Low life, 9 March) that most Americans are almost illiterate, but to confirm it. Also I have a...

Sir: I was somewhat alarmed by the adver- tisement you ran with your 23 March 1985 issue: 'looking for a production editor/sub- editor with a flair for the attractive verbal and...

Fitting in with oil Sir: Jock Bruce-Gardyne (The economy, 30 March) asks how North Sea oil would have 'fitted in' had we not had increased import penetration etc. His noble...

Consecrating Lawrence Colin Welch I t is often overlooked how many of Auberon Waugh's most startling effects are produced by bald statements of literal truths unfamiliar,...

Jay's Guide Samuel Brittan Sterling: Its Use and Misuse: A Plea for Moderation Douglas Jay (Sidgwick & Jackson £15) A tell-tale sign of the uncertain state of he would-be...

There's a pollen of bees In the heart of the flowers A survival of grubs In the cabbage A compost of words At one end of the plot At the other A stillbirth of garbage. Gabriel...

Peter Levi Diocletian and the Roman Recovery Stephen Williams (Batsford £17.50) N othin g changes as rapidly as the past, and the longer ago it is, the more it changes....

Gavin Stamp Architecture in an Age of Scepticism: A Practitioners' Anthology Compiled by Denys Lasdun (Heinemann £20) A ll this talk about art is dangerous,' Edwin Lutyens...

Entangled Christopher Edwards The Possessed (Almeida) rrhis is a compelling and exhausting staging of Dostoyevsky's novel The Devils. It is also, frequently, irritating to...

• Sisters Peter Ackroyd T he writer and director of this Dutch film, Marleen Gorris, is conventionally described as a feminist. This has the advantage, at least, that her...

Ifs and buts Peter Levi M y life has become so sedentary in recent weeks that my only exercise is adjusting lights and curtains for evening television, and letting the cat in...

Handicapped Taki vinding something original to say about age is almost as hard as forgetting that age exists. Everyone, except for people who sit on top of poles in India,...

Toytown Jeffrey Bernard T got home last week from the Middlesex 1.Hospital to find that one of my best friends, my Swiss cheese plant, was dying. I put her on a drip — it is...

Almost human Alice Thomas Ellis T he daffodil was out in the London garden when we left. Just the one, looking like someone who has turned up, dressed to the nines, for a...

The fence P. J. Kavanagh Tt is very muddy at Molesworth. As an 'increasing poundage of Cambridgeshire attached itself to each boot there was sympathy to be felt for the 20,000...

No. 1367: Vox temporis Set by Jaspistos: If you dial by telephone to ascertain the time now, the information is supplied by a male voice instead of the previous female one. You...

Jaspistos reports: Competitors were asked for a poem using only one rhyme. Thank you for a tremendous and amus- ing response, and thanks, Gerard Benson, for telling me about Dr...

Fighting chess Raymond Keene D espite the absence of Karpov, Linares reached category 14 and may well turn out to be the strongest tournament of the year. Linares, March 1985...

I n Time Must Have a Stop (I think), Aldous Huxley

describes champagne as tasting like 'apple peeled with a steel knife'. I've always though that a perfect description, but of course it isn't even an adequate .one: it means...