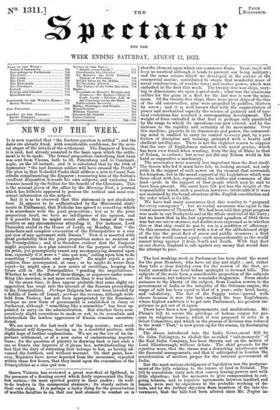 The last working week in Parliament has been about the

worst for the poor Members, who have sat day and night ; and, rather than take a clear holyday even for the review of the fleet, ac- tually assembled one hour before midnight to...

Queen Victoria has reviewed a great war-fleet at Spithead, in

the presence of a floating crowd which fairly represented the Eng- lish nation,—its most spirited gentry in their yachts ; its well- to-do traders in the commercial steamers;...

Ir is now reported that " the Eastern question is settled " ; and the dates are already fixed, with considerable confidence, for the seve- ral stages of the details of the...

The third visit of the Queen to Chobham Camp was

made on Satur- day : her Majesty was accompanied by Prince Albert, the Prince of Wales, and Prince Alfred. The Common was crowded with visitors of all ranks. The chief novelty...

AT a Court held at Buckingham Palace on Monday, the

Duchess of Leuchtenberg had an audience of the Queen. The following gentlemen had audience of her Majesty : Senor de Castello y Lanzas, Envoy Extraordinary from the Mexican...

The great naval review at Spithead, in presence of the Queen, took place on Thursday, under bright skies and most gentle breezes—altogether "the Queen's own weather." The...

The Cambridge Commission terminated its investigations on Saturday. Sir Fitzroy Kelly was the last witness examined. He denied having authorized or known of any improper...

The Mends of Mrs. Chisholm assembled at the London Tavern on Tuesday, to express their gratitude for her " long, arduous, and success- ful efforts in improving the condition of...

The Lord-Lieutenant set out on Tuesday for Killarney, on a visit to the Cattle Show of the Royal Dublin Society. The dinner was fixed for Thursday. Dr. Higgin, Bishop of...

num-E.—With the near approach of the 15th of August, the anniver- sary of the fete Napoleon, rumours of the Emperor's coronation revive ; but if any preparations for that...

The Archdeacon of Taunton has given notice of his intention to move the following resolutions in the Lower House of Convocation, on the 18th instant- " 1. That it appears to...

The foremost subject in Parliament last night was a debate in the House of Lords, on the state and history of the Turkish question, with an explanation from the Foreign...

Mr. Fitzroy has been prevented by illness from attending at

the Home Office for the last ten days ; but his medical advisers entertain confident expectation& that he will speedily be. able to resume his duties. [This is an explanation of...

The opinions of the Judges on the questions submitted to

them arising out of the famous trial connected with the Bridgewater property, devised on condition that the heir obtained a peerage, were submitted to the House of Lords...

A telegraphic despatch, which arrived at Venice on the Gth

August from Trieste, confirmed the news of the Porte having accepted, v. ithout any modification, the note drawn up at Vienna by the four Powers who signed the treaty of 1841. A...

STOCK EXCHANGE, FRIDAY APTERNOOH. The depression which characterized the English Stock Market last week has been succeeded by considerable reaction in prices, and much...

From the detailed examination of witnesses to sustain the charge

of forgery against Smyth, it appears that his real name is Previa ; and that he i was at one time confined in gaol for horse-stealing. His sister recognized him ; and also an...

SMOKE WITISA.NCE. 1 Adam Street, Adelpht; 10th August 1853. Six-The article in the Times of this morning on the Smoke Nuisance has hit the solution of the difficulty, and...

Jessonda was performed at the Royal Italian Opera on Saturday last, for the first time. It had been promised since the beginning of the sea- son ; and Spohr himself came to...

A grand spectacle, the subject of which is fully expressed by the title Ze Consulat et r Empire, has been brought out at the And= Cirque.

When an audience bas received a good five-hours entertainment, it

has certainly recovered the value of the money paid at the doors ; and if the manager chooses to devote a sixth hour to dramatic recreations, it may be looked upon as a sort of...

Brantwood, 10th August 1853. Sm-I observe that within the last few days an English Magistrate has committed a French subject to Newgate for having stated that he intended to...

" SMYTH versus SMYTH." Tin great Smyth case is not so singular as it seems to be thought. From the time of Perkin Warbeck, and before his time too, " the rightful heir" has not...

IF some intelligent Chinese officer charged with promoting the trade between Great Britain and China had landed in Ireland in 1848 mangre the vigilance of the Queen's officers,...

TO RETRIEVE THE IRISH NATIONAL SYSTEM OF EDUCATION.

IT is to be hoped that the mischief inflicted by bigotry and official temporizing on the National System of Education in Ireland may be repaired. It is not impossible, although...

BRIGHT IDEAS ON THE MILITIA.

" CIIILIBET in sus arte eredendum est," as Colonel Sibthorp says; and, undoubtedly, the Colonel showed himself to be more of an authority in matters of war than Mr. Bright ;...

THE FUTURE OF THE CUBA QUESTION.

THE papers relating to the subject of Cuba and the projects of an- nexation touching that island, which the House of Commons asked of the Crown early in the session now closing...

THE smoke of the Metropolis is doomed : London will no longer be known by the cloud hanging over it ; the tall ehimnies which disfigure it here and there will disappear ; the...

URQUHART ON RUSSIA'S DESIGNS AND PROGRESS.. IT is unfortunate for the reputation and perhaps for the utility of the Russophobists, that they allow phobia to pass into mania, and...

MR. DARIUS'S STORY OF CORFE CASTLE. * IN addressing the members

of a Corfe Castle Society for Mutual Improvement, Mr. Bankes, instead of remote subjects, selects for the theme of his lucubrations an object whose ruins are before their eyes,...

ELE C T A. * IF the novel of _Rockingham (which

we never saw) resembles Elec- tra, the praises that have been bestowed upon the writer are exaggerated. The fiction before us does not exhibit events, cha- racters, and...

LIFE IN THE CLEARINGS versus THE BUSH. * This title is

rather inaccurate. Mrs. Moodie's new work does not present the same practical picture of daily life and family ad- venture among gentlemen colonists, who have been wise enough...

Boors. The Greek and the Turk; or Powers and Prospects in the Levant. By Eyre Evans Crowe. Life in the Mission, the Camp, and the Zendnd ; or Six Years in India. By Mrs. Colin...

On the 2d August, at Purley, Berks. Lady Hop e , of a son. On the 5th, at the Admiralty, Lady Hermione arham, of a daughter. On the 7th, in Upper Seymour Street, Portman...