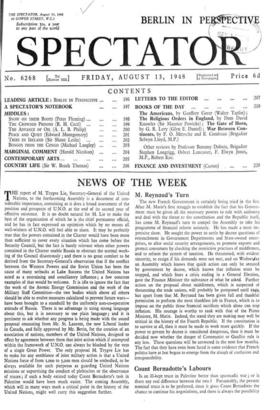 The new French Government is certainly being tried in the fire. After M. Marie's first struggle to establish the fact that his Govern- ment must be given all the necessary...

T RE report of M. Trygve Lie, Secretary-General of the United Nations, to the forthcoming Assembly is a document of con- siderable importance, containing as it does a broad...

Is an ill-kept truce in Palestine better than spasmodic war ; or is there any real difference between the two ? Presumably, the present nominal truce is to be preferred, since...

The Belgrade discussions on control of Danube navigation are pursuing their intolerable course—intolerable because Russia is plainly disposed to exploit to the utmost the...

It is not surprising that the Nizam of Hyderabad should have protested sharply on Wednesday against the occupation of two villages in his territory by Indian troops. The...

Though Congress has adjourned, the House Sub-Committee on un-American activities is continuing its labours undeterred by the temperature of a Washington August. If it were not...

The complications of Canadian politics are a closed book to most Englishmen. It is therefore hardly surprising that comment on the election of Mr. Louis St. Laurent to be the...

A Watch on Petrol

The House of Commons Select Committee on Estimates justi- fies itself afresh by every new report it issues. The latest example deals with the use and misuse of petrol by...

It is no doubt a coincidence, but a singularly instructive one, that the same week should bring news of the worst coal output and the best steel output of the year. Though easy,...

The Olympic Games end this week, and there is no doubt at all that they have been a success. Despite weather varying latterly from the unreliable to the vile, attendances have...

The statement which the British Medical Association has issued on the respective rights of doctors and patients puts the general position accurately and fairly. It is prompted...

With the retirement of Sir Alexander Maxwell, Permanent Under- Secretary of the Home Office, WRitehall will lose one of the ablest, as well as the most untiring, civil servants...

L OOKING for holes in the wall of secrecy round the Moscow talks is one of the less profitable ways of filling in time before the results are officially announced. There is no...

Swimming certificates were to be presented after the prizes, and

during the usual long-drawn-out contest between the speakers on the dais and the infants in arms at the back of the village schoolroom I examined the tastefully coloured cards...

Among the youth of the Socialist Britain in which it

is at present our lot to live there seems to be a tendency for every man to expect England to do her duty by him rather than the other way round ; at any rate none of the three...

his explanation, handed the microphone back into the van and made a signal with his hand. The 25-pounder just below us fired six rounds. They all hit the board hanging from the...

The nearest I ever got to taking part in international

archery (a tournament is now in progress at Dulwich College) was persuading the War Office to buy some bows and arrows to shoot Germans with. The idea wasn't quite as silly as...

and theatre personalities, financiers, publicists, and everybody connected with the show business and the film, radio and stage world will be found in this book," Messrs....

I N bad visibility you might have taken the eleven figures in white for a cricket team whose captain had set—for they were not widely dispersed—an offensive field ; but the...

My unit in Kent was based on the densely wooded

spur between Chilham and Charing, and it soon became apparent to us that when the Germans came we should be very much better off if we had, in addition to our normal weapons,...

SNOW ON THEIR BOOTS

By PETER FLEMING I think our lack of a land frontier partly explains our inability— which goes back much further than the Crimean War—ever to under- stand the Russians. Their...

THE ADVANCE OF OIL

By A. L. B. PHILIP Y ET another Middle-East oil concession has been put through. It covers an area of about two thousand square miles of what has been described as potentially...

By R. H. CECIL T is difficult to imagine any building project that would command I unqualified approval among the locals. This country desperately needs bigger and better...

By EDWARD MONTGOMERY New York. I T is always dangerous—and can on occasion be downright wicked—to attempt to generalise about the mood and feelings of a nation of a hundred and...

By SIR SHANE LESLIE li) URING the present month the Men of the Trees have held their summer school in Dublin, and foresters from all Britain and 'Guernsey and the Isle of Man...

Red and grey Toledo leaping Out of harder rock, and high Stone and burning tower flinging Granite birds against the sky. Water, rack and iron maiden Whip is willing, flesh is...

BONGOS FROM THE CONGO

By MICHAEL LANGLEY H AVING left the immediate neighbourhood of the Congo, having lost touch with the main branch of their family, now under Belgian protection, the Tonj Bongos...

By HAROLD NICOLSON fl AVING spent the last week in the country, I have had the opportunity to watch the Olympic Games upon the television screen. I have found it an entrancing...

BEETHOVEN still seems to be the most popular composer with the Prom, audiences, though Bach and Mozart run him close. In a way this seems to me an excellent sign and it says a...

"Le Silence est d'Or." (Rialto.) — "The Road to Heaven." (Academy.)—" Killer McCoy." (Empire.) THE new Maurice Chevalier-Rene Clair film is a disappointment, but not one that...

In the Garden Garden catalogues arrive almost daily, many of

them from smaller growers who have started of recent years. They are well worded and illustrated, but singularly unvaried. I happened to wish to buy some lily bulbs, especially...

Holidays in the Harvest Fields There could be no more

cheery holiday trip than a walk among English harvest fields this August. Do wealth and beauty so coalesce anywhere else? During an evening stroll I happened to see all the...

How vain it is to generalise about England with its infinite varieties! While Kent laments the paucity of birds and butterflies, Hertfordshire boasts of the exceptional number...

WE are disposed, this undemanding lane, These uncontending fields and trees and I, In one drenched gloom with the down-gathered sky, All wide awake but in a trabquil vein....

A peculiarly happy association exists between the National Trust and naturalists in general ; and this is particularly well illustrated in regard to the Council for the...

CONSCRIPT SERVICE Sta,—Field-Marshal Lord Montgomery is reported as having said at Bulford, "For some reason which is unknown to me, the response by the manhood of England to...

SIR,—Your correspondent, "Middle East Observer," highlights one of the most

unfair aspects of the Palestine problem—the driving away of Arabs from their own land. A friend of mine, recently returned from this area, confirms everything that your...

SIR,—" Middle East Observer" is right in calling attention to the unfor- tunate plight of the Arab refugees from Palestine, but wrong in attribut- ing it to Jewish "military and...

STR,—In reviewing a book about Peary's servant and friend, Matthew Henson, Mr. L. P. Kirwan says: "Peary's enemies were quick to point out that on the last and crucial stage of...

SrP o —The Spectator of June 4th has only just reached me, but I hope it is not too late to refute the misstatement contained in the last paragraph of the letter from Mr....

SIR,—Surely Mr. Wilson Harris in his article under this heading mistakes the real reason why so many support the Lords rather than the Commons on this question. He states that...

SIR,—Everyone will welcome any productive idea for British industry that may come from the Anglo-American Advisory Council. It should be recognised, however, that the greatest...

WILLIAM TEMPLE AND THE W.E.A.

Sut,—In his review of Dr. Iremonger's Life and Letters of William Temple, John Christie suggests that the W.E.A. was perhaps of all his " causes " the one nearest to his heart....

Sta,—Strix considers that "you have no further worries" once the Pest Officer's team is on the rat-killing job. There are, however, two sides to all questions, and twenty to...

BANKS AND THE PUBLIC

Sra,—Mr. Frank Ward's letter in your issue of August 6th apparently insists that the service a bank renders to its customers is confined to the period of the day when the b'ink...

Sta,—I am interested in.,Dr. C. K. Allen's article On Pitching It Strong, as I received an identical letter from Senor M. dated from Mexico City on April 15th last. Like Dr....

Sitt,—One important omission from the Royal Agricultural Show escaped the notice of Mr. Walston and was not mentioned by Mr. Hobson. No poultry were shown. This was exceedingly...

have read in The Spectator of July 16th the somewhat harsh remarks of Mrs. Ethel K. Davies concerning correspondents from Germany. Personally I feel that no pathetic letters...

Sta,—Strix, in your issue of July 30th, comments on the Press advertising of the British Electricity Authority. Incidentally, the Central Electricity Board to which he refers...

LET US POST A COPY OF THE SPECTATOR TO YOUR HOLIDAY ADDRESS. Send instructions with a remittance - 70. for each issue — to THE SALES DEPARTMENT, THE SPECTATOR, 99 Gower Street,...

IN 1940 Dom David Knowles published his great book The Monastic Order in England, a history of its development from the times of St. Dunstan to the fourth Lateran Council...

Inside Americans The Americans. A Study in National Character. By Geoffrey Goren (Cresset Press. 10s. 6d.) MR. GEOFFREY GORER'S special qualifications for writing a book about...

The Gate of Horn : A Study of the Religious Conceptions of the Stone Age, and their Influence upon European Thought. By G. R. Levy. (Faber and Faber. 42s.) MIss LEVY surveys...

Rudyard Kipling. By Rupert Croft-Cooke. (Home and Van Thal. 6s.) Kimnsic was more complex, both as a person and as a writer, than is usually conceded, and Mr. Rupert...

War Between Continents. F. 0. Mitzsche and E. Combaux. (Faber and Faber. 15s.) COLONEL MITZSC.HE served in the Spanish Civil War as a General Staff Officer on the Republican...

AGAINST a 'military historian of important far-flung campaigns, with pretensions to be comprehensive and objective, would it be a fair complaint that he had failed to suggest...

THE artists dealt with in the second trio of volumes published in the admirable English Masters of Black and White series are of rather more questionable achievement than the...

Nuremberg Diary. By G. M. Gilbert. Introduction by Sir David Maxwell Fyfe. (Eyre and Spottiswoode. . . _ OH that mine enemy had kept a diary ! It was the diaries of Frank and...

FEW who complain of the peevishness of a reviewer realise how desperately he longs to shout and cheer. Novels in fact often get a higher grading than they deserve for this very...

By CUSTOS WITH holiday influences in full swing markets are now dominated by " professional" activities. That even the hardened operators are finding it hard to see their way is...

Judge Jeffreys. By H. Montgomery Hyde. (Butterworth. 21s.) THE re-issue of this admirable biography—" a book not only of great fascination but of permanent value, too," as Sir...

On the Road to Amsterdam. By 0. J. Beard. (Independent

Press. is.) THE General Assembly of the World Council of Churches, which opens at Amsterdam on August 24th, may justly be regarded as the most important gathering of Christian...

SOLUTION TO CROSSWORD No. 488

[A Book Token for one guinea will be awarded to the sender of the first corretj solution of this week's crossword so be opened after noon on Tuesday week August 24th. Envelopes...