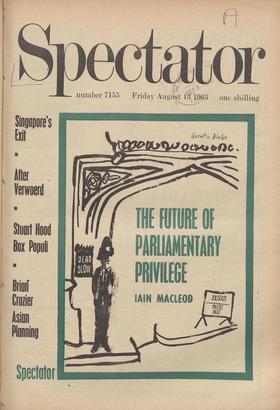 INGAPORE'S secession from the Federa- Ction of Malaysia marks the failure of an idea. Not that the idea was a bad one, but that it has proved out of time. Federation in...

Portrait of the Week A (1000 WI ER for President

Sukarno, who cele- brated twenty years of independence on Monday with bonlires of Imperialist Beatle records, and a sudden rift in the Malaysian Federation on Tuesday with...

The Mysterious Mr. Aidit DEV MURARKA writes from Moscow: Summer time is Moscow visiting time for the leaders and captains of the nations. Even this summer, notoriously wet and...

The Overnight Bag • HENRY WILLIAMSON on R ichard Jefferies One year's subscription to the 'Spectator': f3 15s. (including postage) in the United Kingdom and Eire. By surface...

Salvation in the Docks? MAURICE GENT writes: The sudden burst of reformist zeal that swept dockland immediately after the publication of the Devlin Report was truly...

The Circle Won't Square From ,DON COOK GENEVA N ow that the Geneva disarmament talks are under way again, it is possible to imagine a scene in the Kremlin back about June in...

The Pressure on France From PAUL LEWIS BRUSSELS I is now just six weeks since General de Gaulle 'broke off discussions with his Common Market partners on financing the...

Harold Wilson upstairs Unequivocally declares That he neither hums nor hedges About any of his election pledges. Harold Wilson on the Floor Produces the mixture as before. It...

True Colours CHRISTOPHER BOOK ER writes : Mr. Cecil Harmsworth King and his hench- man Mr. Hugh Cudlipp are two men who must sleep easily in their beds at night. For when great...

Devlin-Worship By ALAN WATKINS R ARELY has any official document become part of the received opinion of the times quite as rapidly as Lord Devlin's report on the docks. It has...

The Future of Parliamentary Privilege

By LAIN MACLEOD P ERHAPS the only lasting advantage that can be gleaned from the flurry of privilege cases in the last two sessions of Parliament is that they have provided an...

OFFER an interesting footnote to the corre- I spondence now going on in The Times about the Parliamentary Correspondent's reports of de- bates in the House of Commons. It is a...

A Season in the Country By PETER VA'NSITTART I HAD begun a novel which, could it but get finished, seemed likely to be the best book ever writ- ten. It was going well: I had...

For me, easily the most satisfying revelation of the week

was that there really is a Joan Hunter Dunn. John Betjeman's enchanting 'Subaltern's Love Song' has been part of my repertoire of songs in the bath for some years. And there...

This week, I am happy to say, Stuart Hood joins the Spectator as television critic. Readers of Encounter will long cherish his recent masterly and persuasive comparison between...

Everyone else has gone on holiday, although I suspect that a number of our senior citizens are only playing bowls until the news of the Armada comes. The political columnists...

By ARNOLD BEICHMAN W HAT more can be said about South Africa that has not been said? And what new resolutions can be drawn up denouncing what has already been denounced so many...

A word on the controversy which has been going on in The Times letters column about the state of the nation's beer. It is of course a scandal that the brewers (with the...

At the time of the Aberdeen typhoid outbreak, I wrote about the necessity of people wash- ing their hands after using the lavatory. I am sorry to learn that what is probably the...

SIR, — In the days of my childhood (the weather must have been sunnier in the gay 'twenties) straw hats were quite often worn by men in Lancashire and also by schoolgirls as a...

The Man Who Was Shakespeare

SIR,—in Martin Seymour-Smith's review of the latest-published book on Marlowe (Spectator, August 6), he calumniously refers to my book The Murder of the Man Who , Was...

sm,—You may wish to correct for your readers two errors in the June 25 review of The Days of Dylan Thomas. Your reviewer states that American writers on Dylan Thomas...

SIR, — I did not believe, say or suggest that Frederick the Great and Mozart ever met. I only alluded to the instructions given by the King to his Minister in Vienna, to suggest...

SIR, — What kind of reasoning is it that gives a man credit for a 'strong and enduring religious faith' aside from what it has meant in his life (lain Macleod, June 25)?...

Box Populi By STUART HOOD pins is a bad time for British television. Partly it can be explained in terms of the season. August is for repeats. It is also for re- scheduling...

SIR,—I t is odd that Mr. Booker should be so con- vinced that the Observer's ship is sinking when it was only a few months ago that he was asking for work on 'that dreadful rag'...

Scales rTHERE are as good fish in the sea as ever came 1 out of it—unless the sea happens to be music and the fish symphonies. It would be silly to pretend that anything...

Behind the Pulpit rr HE two exhibitions at the Marlborough New 1 London Gallery should not be missed. Bacon is showing a group of entirely recent work: Moore's sculpture covers...

BOOKS From Rags to Riches

By BRIAN CROZIER HE assumption that dependence was the main 1 impediment to affluence was almost univer- sally made among the independent movements in countries that have...

A Vision of Reality. By Frederick Grubb. (Chatto and Windus, 35s.) AT the centre of Jon Silkin's new collection is an impressive group of what he rather apologeti- cally calls...

WITH his romantic concern for personality, Mr. John Gunther is the Eamonn Andrews of inter- national journalism. One can just about imagine some TV impresario, specialist in...

The Hero Without a Name By NEVILLE BRA YBROOKE , phe Death Shirr is the most famous of all 11 B. Traven's books. When it first came out in Germany exactly thirty years ago,...

SHOULD Soviet literature be discussed purely in terms of • its `esthetic' qualities? Or is it legiti- mate to survey it in its social and political con- text? The latter, imply...

An Absence of Angels. By Gordon Dryland. (Collins, 18s.) Under a Changing Moon. By Margot Benary. Translated by Rosaleen Ockenden and the author. (Macmillan, I5s.) Dialogues...

The Devaluation Bore By NICHOLAS DAVENPORT ALL this talk of devaluation has become a bore. tiDoes anyone in his senses think that de- valuation of sterling would be a good...

By LOTHBURY rywo weeks ago we published a brief summary I of the accounts for London Asiatic Rubber and Produce for 1964. Mr. John Sands, the chairman, explains to shareholders...

By CUSTOS T HE devaluation talk has certainly become a bore in the share markets. Gold shares and the shares of companies with big dollar interests rush up with the rumours and...

Made in England By MARY HOLLAND ONE thing this country badly needs is a national gift. At the moment we have nothing to offer the dutiful foreign swain, or husband, or father,...

By LESLIE ADRIAN SUNTANS are rare this year, but through no capricious whim of cosmetic fashion. The British, uncertain of ultra-violet lamps and dis- appointed in the promise...

ALAN BRIEN By THE reason I have always preserved warm feelings to- wards the New and Latter House of Israel was slightly obscured last week by a last-minute cut in my article....

SOLUTION TO CROSSWORD No. 1182